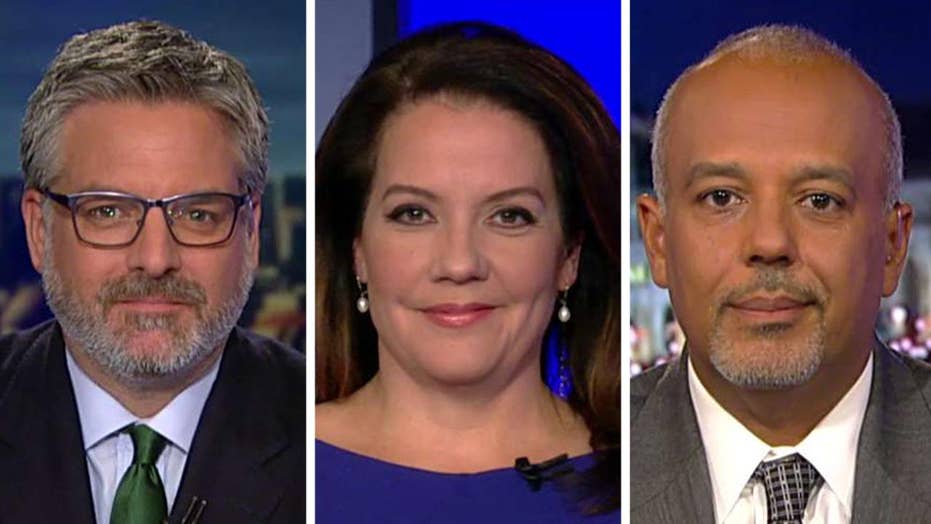 The first charges out of Mueller's office

This is a rush transcript from "Special Report with Bret Baier," October 30, 2017. This copy may not be in its final form and may be updated.

KEVIN DOWNING, MANAFORT LAWYER: President Donald Trump was correct. There is no evidence that Mr. Manafort or the Trump campaign colluded with the Russian government.

The president tweeted earlier today before all of this, "Sorry, but this is years ago," this is when the indictments first came out, "before Paul Manafort was part of the Trump campaign. But why aren't crooked Hillary and the Dems the focus??? Also, there is no collusion!"

The second part of the release today was about George Papadopoulos, who was by all accounts a volunteer on the Trump campaign. But there you see in a national security meeting a couple pictures from the Trump Instagram account. And he pled guilty October 5th to misleading statements to the FBI in this investigation. And I guess those were the eyebrow-raising developments today because we don't know what has done since he was arrested in July.

Let's bring in our panel: Steve Hayes, editor in chief of The Weekly Standard; Mollie Hemingway, senior editor at The Federalist, and Mo Elleithee, executive director of the Georgetown Institute of Politics.

MOLLIE HEMINGWAY, THE FEDERALIST: For people who have long reported on Paul Manafort's financial dealings, and that includes everyone from The Weekly Standard to The New York Times, today's news is mostly surprising for it just being one count of money laundering and then the associated violations of paperwork to go along with it.

It does point to a larger bipartisan corruption problem with lobbying, but today's news doesn't have anything to do with the Russia-Trump collusion, which is the thing that Bob Mueller is supposed to be looking into. If he is interested in people not doing a good job with registering their work on behalf of foreign governments and the election meddling, he is going to be curious to look more into Fusion GPS, which is the firm that was hired by the Clintons, by the Clinton campaign and the DNC to run that Russia-Trump dossier operation. And there will be a lot to look into there that will be very interesting.

BAIER: We should point out developing today was that Tony Podesta, the Democratic lobbyist, left his firm that is named for him. And it is believed that he in some capacity is under investigation by the special counsel as well, perhaps along these ties to Manafort and Ukraine. Steve, your thoughts?

STEVE HAYES, THE WEEKLY STANDARD: This is the first step. We know a lot more than we did a week ago. There is still a lot we don't know. The Manafort and Gates indictments I think if you read all 31 pages, if you had asked us a week ago to predict based on what we had read publicly about Paul Manafort and his business dealings, this is pretty much what we would have set I think. Most of this was in the public record, the indictment added some new details to it, but I don't think we learned a ton.

As it relates to the Trump collusion narrative, Andy McCarthy writing in National Review said that the indictment appears to reaffirm former FBI Director James Comey's multiple assurances that Trump is not a suspect. Again, it's early. There is more to learn. There's a possibility that Papadopoulos was wearing a wire. We know he was cooperative. This is the beginning of a long investigation, not the end. But this is probably a good day for Donald Trump on balance.

BAIER: Here is the White House press secretary and the president's attorney on Papadopoulos.

SANDERS: I would hardly call that some sort of regular advisor or, as you want to push, that he's a senior member of the staff. He was not paid by the campaign. He was a volunteer on, again, a counsel that met once.

JAY SEKULOW, AMERICAN CENTER FOR LAW AND JUSTICE: I'm not concerned about it because if you look at what, again, George Papadopoulos' plea is, what the actual plea being entered into was, again, a false statement about timing as to when he talked to somebody about Russian activities. It wasn't -- by the way, these weren't activities that were illegal. It wasn't the conversation that they had.

MO ELLEITHEE, GEORGETOWN INSTITUTE OF POLITICS: The Papadopoulos, there is a lot of bad here today for the president. The Papadopoulos I think is the biggest blockbuster because while the plea was specifically for making a false statement, if you read the statement of offense, there is a lot in there that show collusion. It shows that he had regular engagement with Russian agents. It shows he took the engagement to his supervisors at the campaign.

And while we heard the press secretary say that never went anywhere, I don't think that's exactly true. On August 15th, according to the statement of offense, on August 15th a campaign supervisor encouraged him to take a trip to Russia for an off the record conversation about these emails that weren't even public that the Russians had. Quote, "I would encourage you" and another foreign policy advisor to, quote, "make the trip if it is feasible." That's coming from a campaign supervisor.

HEMINGWAY: That trip never took place. And in fact campaign brass turned down meetings that he was trying --

HEMINGWAY: Collusion doesn't mean do you have a preference for a different policy toward Russia or a willingness to talk to Russians? It means conspiring to steal an election. I think what people are wanting when they've been told this narrative for a year, they want evidence that Trump committed treason, that he did something criminal or wrong to steal an election, not that -- we all know Trump has a different attitude toward Russia than other people.

HEMINGWAY: And if people care about collusion, then they should be really interested in the hiring of Fusion GPS, which is a Russia linked firm, that was getting sourced from the Kremlin and other Russian operatives to run an information campaign against the opponents. So if they are interested in that, and if they do think that's collusion, well, that is something you should look into. If it's just opposition research, then that's just something both parties are involved in.

BAIER: It is a fair question. And they are in trouble, many of them, at least from what we read in these documents, for false statements.

Now, it's important to point out to Mollie's point, there was not a federal investigation of the Clinton funding of Fusion GPS, hence they were not lying to federal investigators so they don't have charges of lying.