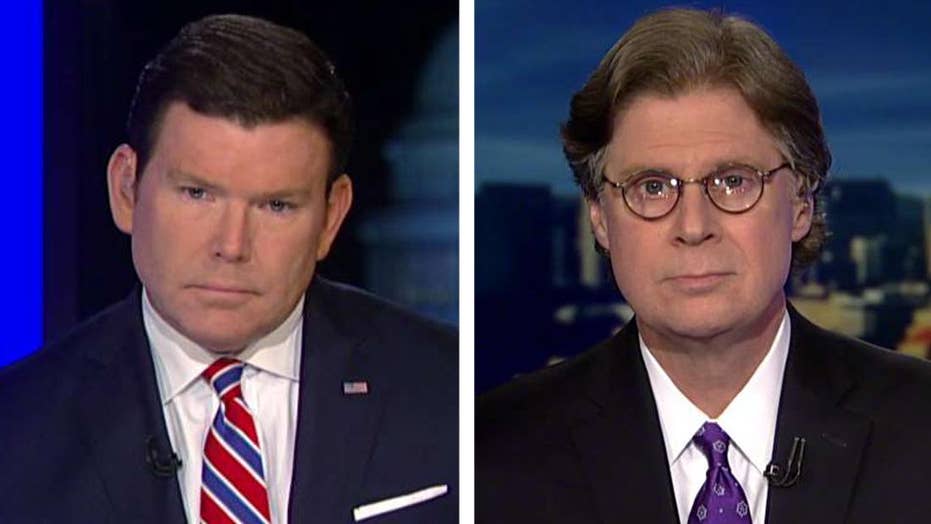 The fallout from releasing the FISA abuse memo

This is a rush transcript from "Special Report with Bret Baier," February 2, 2018. This copy may not be in its final form and may be updated.

BRET BAIER, ANCHOR: A lot of focus on the memo released today, declassified, and the allegations of FISA abuse. Top Senate and House Democrats have issued a letter to the president saying, quote, "We are alarmed by reports that may intend to use this misleading document as a pretext to fire Deputy Attorney General Rod Rosenstein, in an effort to corruptly influence or impede Special Counsel Bob Mueller's investigation. We write to inform you that we would consider such an unwarranted action as an attempt to obstruct justice in the Russia investigation. Firing Rod Rosenstein, DOJ Leadership, or Bob Mueller could result in a constitutional crisis of the kind not seen since the Saturday Night Massacre," a reference to Watergate there.

What about all of this today? Let's bring in our panel: Byron York, chief political correspondent of the Washington Examiner; Susan Page, Washington bureau chief at USA Today, and Matt Schlapp, contributor with The Hill. Byron?

BRYON YORK, WASHINGTON EXAMINER: Well, the first thing on the memo itself, there are two really big points which is that one, it said that the memo was an essential part of this effort to get a wiretap warrant on Carter Page, and, two, it said that Andrew McCabe, the number two at the FBI, said that without the dossier there would not have been a warrant.

BAIER: One clarification. It's not a quote in that part. And I asked Nunes about that. He said there was a process to put out the transcript of McCabe and they would have to go through that to get the transcript put out. But he says it was an integral part and that the FBI led with the dossier in the FISA applications.

YORK: And there is also the possibility that somebody else who was in a position to know also said that without the dossier there wouldn't have been an application. So those are two really, really big things.

On the other hand, then you look at what you have got now in the dossier and then you look at what the FBI, the Justice Department and Democrats have been saying the last few days, that this would be an assault on the rule of law, that it would reveal American intelligence sources and methods. And you ask, does it really do that? And I think the answer is no.

SUSAN PAGE, USA TODAY: I agree the question about whether they could not have gotten a FISA warrant without the dossier. I think that's an important point. It's one that's under dispute between the two parties. It's a knowable fact about whether he said that or not, and so I'm hoping that we will know what he actually said before the committee and what the truth was on that. But I think actually think the most important thing about this report out today is whether it is in fact used for additional purposes. For instance, the president's tweet this morning, the president's comments that you just aired indicate that he would like to fire people as a result of this. And if he does that that seems to me it could be extremely consequential.

BAIER: Matt, listen, the hyperbole on both sides has at times gone off the deep end. Leading up to this, some congressmen are piping this up as the moment of the biggest thing. Others were too, commentators and others. On the Democratic side, they were so concerned about sources and methods and what would this do to the institution. Where is the ground truth here?

MATT SCHLAPP, THE HILL: So what is it, Bret? Is it going to destroy our national security if this document is released? Then the document is released and it's called a nothing burger, there's nothing in it. It's not very important. I think the Democrats who have been critical of Devin Nunes need to pick a lane.

And I think it's important -- I think you are right. There has been hyperbole. The one thing I would say, Bret, is this is not going to break the back of those folks who used the federal government to try to go after a political opponent. This is one step. We're going to learn more. And I think it's very important to take a breath and to take a step back and say, because a lot of conservatives don't like FISA, they don't like the government having this kind of authorities, they don't like the government spying on Americans. Are we OK with one administration using these powers to go after their political opponents? I think that is very scary.

BAIER: But there were two Trump appointed deputy attorneys general that continued the FISA surveillance?

BAIER: What does that tell you?

SCHLAPP: I think it tells you they might, they current one might have some job security issues, number one. And I am willing to give him the benefit of the doubt. But if you read the FISA memo it is alarming that this was done clearly to advance the Democrats and Hillary Clinton, why would they want to continue it? And even the Russian said Carter Page was an idiot. They didn't want to use him as a spy.

BAIER: A couple things that jump out. The memo, number one, graphic, September, 2016, Christopher Steele admitted to then associate deputy general Bruce Ohr who his wife worked for Fusion GPS who put this all together, this feeling against then candidate Trump when Steele said, quote, "he was desperate that Donald Trump not get elected and was passionate about him not being president." Byron?

YORK: I think that part, his personal animus toward Trump is less important than the fact that the dossier was an oppo-research product funded by the Democrats. But I do think maybe one of the most beneficial effects we are seeing right now is that the release of this memo has created a lot of momentum for the release of more stuff. What did McCabe tell the committee? We want to see the McCabe interview. What is really in the FISA application? We want to see that too. So I think that's a good thing. And what is in the Democrats' letter? We need to see more rather than less.

BAIER: Quickly, Susan, overlooked I think in the end of the interview, Nunes said more is coming. There will be other memos. This is phase one just focused on FISA. And two, there are rumbling up on Capitol Hill that there will be an official call for another special counsel.

PAGE: But to Matt's point, I think what is interesting is not the partisan divide on this, which is predictable. It's the divide within the Trump administration between the FBI and the Justice Department and the White House on the other side on whether it was proper to release this report. And that does not have the partisan tinge that the divide between Democrats and Republicans have.