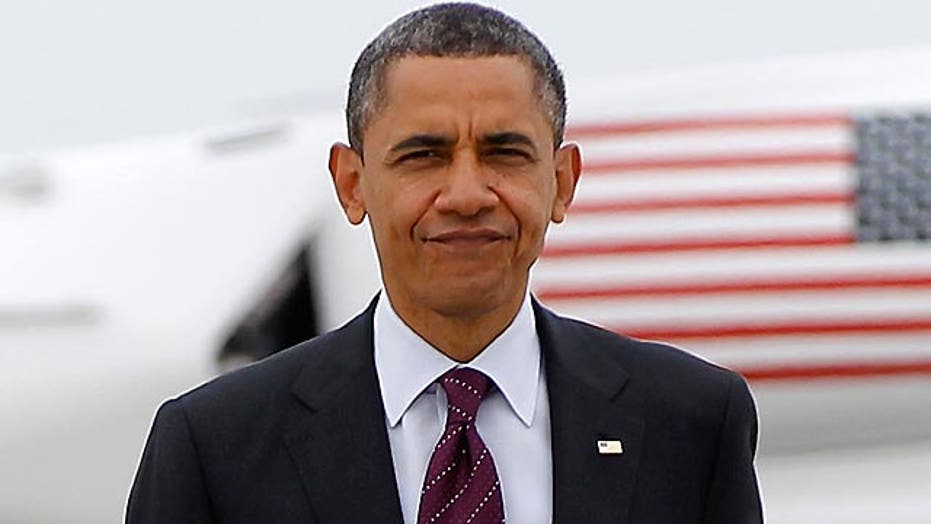 The cost of arrogance

White House getting too cocky?

This is a rush transcript from "Hannity," December 10, 2012. This copy may not be in its final form and may be updated.

SEAN HANNITY, HOST: Considering the significant consequences of falling off the "fiscal cliff," you'd think the president would have some sort of an interest in finding a solution to the crisis. However, it is now becoming increasingly obvious that something is standing in the way.

So, what could it be? Now, what is it that is preventing the president from negotiating or even offering up any meaningful concessions through Republicans? Well, now even a reporter at the left-wing newspaper The New York Times is admitting, well, it just may be Obama's arrogance. Watch this.

HANNITY: My next guest argues that it's time for Republicans to stop trying to cut through the president's arrogance, walk away from the negotiating table. I've been saying that right here on this program.

In fact, Congressman Allen West recently told the great one, Mark Levin, that it's quote "silly" to try and work with somebody who he believes he's a quote, "Marxist socialist rigid ideologue. " Here to elaborate on those comments, the man himself, Florida Congressman Colonel Allen West.

Colonel, I don't remember that you ever said, Marxist socialist before. Maybe being freed up from Congress has allowed you to say that, or maybe I'm wrong in not hearing it before.

REP. ALLEN WEST, R-FLA.: No, I said that before. Because I think, when you sit down and you look at the policies that have emanated from President Obama, his administration, this entire class warfare rhetoric that we continue to hear is definitely a Marxist theory. When you look at the nationalizing production, being the healthcare industry, the Dodd-Frank with the financial industry, the automobile industry, what Lisa Jackson and the EPA is doing to the energy sector, and of course, the National Labor Relations Board, that's nationalizing production. When you look at the incredible expansion of the welfare nanny state, and all of a sudden this belief of economic fairness, economic patriotism, fairness and fair shot, those are the type of policies and theories that are not consistent with a constitutional republic, definitely not consistent with our Founding Fathers, and the type of people that they read, Ben Russo (ph), Marty Skew (ph) or John Locke (ph).

And so, when you talk about the arrogance of the president, we re- elected someone that went from 10.6 trillion to 16 trillion in debt. We've had four straight years of trillion dollar deficits. We've had an incredible earth-shattering numbers of Americans in poverty, Americans on food stamps. We've seen a 32 percent increase in welfare spending. We've seen gas prices being exorbitantly high. So, he has every right to be arrogant and feel he is never going to be held responsible.

HANNITY: But as far as I'm concerned, it doesn't matter what he does. And I think the Republicans need to get over whatever their feelings are about the election. They were elected too. I don't know one Republican congressman -- correct me if I'm wrong -- that was sent there to support the president's agenda. When I vote for a congressman, I vote that they'll represent my interests. So the question is, do you think -- you're still in the halls of Congress -- that these Republican leaders, are they going to be smart enough to shift it to where the direction of the debate needs to go -- spending -- or do you think they'll going to cave in?

WEST: I don't think they're going to cave in, because I think that the Republican conference is going to stand firm. You're absolutely right. When you think about this whole discussion about tax rate hikes, first and foremost, look at California where they've raised the taxes, and they're not having any increase in revenues. As a matter of fact, top wage earners are leaving. Same as with England, same as with President Hollande in France, they go up to 75 percent top rate.

So, that is not going to increase the revenue. And actually, we're only talking about $80 to $85 billion in new revenue annually which does nothing to sustain --

WEST: Eight-and-a-half-days. So, this is a gimmick.

HANNITY: All right. Let me ask you about comments you made to my buddy Mark. "I'm not going away because my opponent had to cheat to beat me." Now, if we are going to save America, I think we've got to have Republicans -- they are the only ones they can stop Obama's radical agenda on the economy. And similarly, we're going to save this country, we need to know that our elections are free and fair. You believe you were cheated in this election?

And furthermore, you had a box of 306 ballots that were not even included in those certified results. As well as in Palm Beach County, you had the instance where the supervisor of election extended early voting to a Sunday, which was against the law that was supposed to have ended the early voting on Saturday. And no one was able to really understand to track the absentee ballots that were issued out.

So if we do not have integrity of our voting process, our electoral process, if the American people lose trust and confidence, then we become nothing more than a Zimbabwe, and even worse, you don't have the consent of the government. That's the most important thing to sustain a republic.

HANNITY: What is the future for Colonel West? You served your country in the military. You served in Congress. This was a close election. Do you have any plans? You thinking about maybe running for elected office again?

WEST: Well, I'm not going to, you know, put that out there right now. We have many options and opportunities that have come to us. And my wife Angela and our daughters Aubrey and Austin, we'll going to sit down after Christmas and we'll going to ponder over these things, and we're going to pray about it, and we're going to make the best decision for us as a family, but also to continue to serve this great republic that, going all the way back to my father who served in World War II, we've always been here for the American people.

HANNITY: All right. Colonel West, good to see you. Thanks for being with us.