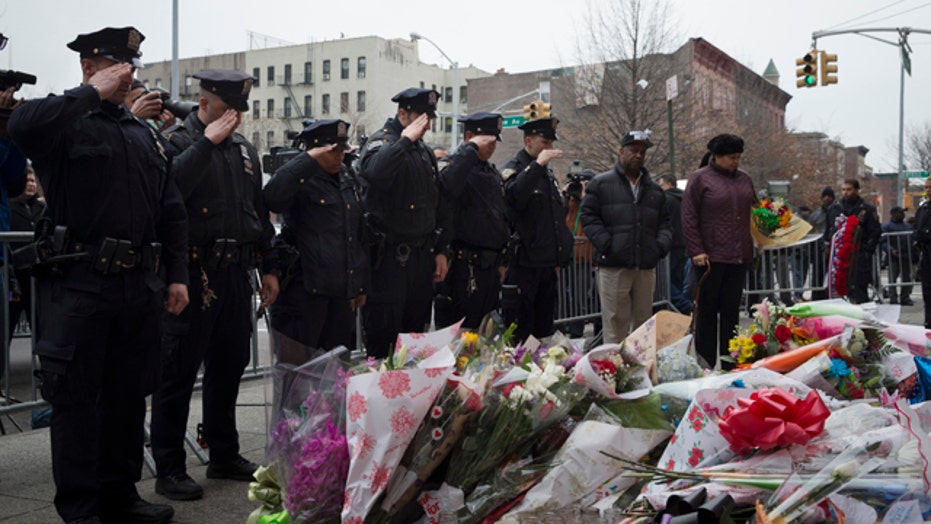 Bill O’Reilly with the latest

Hi, I'm Greg Gutfeld in for Bill O'Reilly, who will join us in just a moment. Our top story, of course -- the cold blooded execution of two New York City police officers. On Saturday afternoon, officers Rafael Ramos and Wenjian Lu were sitting in their patrol car in Brooklyn when 28-year- old Ismaiiyl Brinsley walked up to their vehicle, pulled a gun and shot them both in the head. Brinsley was on a mission -- posting on Instagram a threat to avenge the deaths of Eric Garner and Michael Brown.

I am beyond angry and heart broken over these assassinations as is so much of the country. And Bill O'Reilly who was supposed to be off today he could not stay silent. He joins us by phone. So, Bill, when I heard the news, I was horrified but I was not surprised. Do you know what I mean?

BILL O'REILLY, FOX NEWS HOST: Yes. I know what you mean, Greg. Look, I'm going to walk through this in a very methodical way because I want everybody to hear what I'm saying very clearly because I'm going to send a big message tonight on THE FACTOR.

You have a mayor that comes in, a man named Bill de Blasio. He is a far left individual who is incompetent -- and I will get to him in a moment. He's incompetent. He cannot run the city of New York.

Let's first start off with this killer, 28-year-old -- a guy names Brinsley -- all right. Total loser, 20 arrests, high school dropout, no father that we know of -- the usual cultural devastation. Ok? Raised in poverty, bounces around, no education, no skills, doesn't hold a job -- commits crime after crime after crime. The system won't deal with him because people like de Blasio don't hold him accountable for anything.

Then the man snaps, shoots his girlfriend in the stomach, a woman who actually had a job in Maryland. She survives. Then he gets on a bus and comes to New York City. Then he starts to say I'm going to kill cops so he knew he was through and he decided to go out in the most destructive way possible using the deaths of Michael Brown and Eric Garner as an excuse not as a mission.

Everybody should know this is a terrible individual and I hope he is enjoying hell right now. And there are millions of Brinsleys running around -- millions because our society in America does not hold them accountable -- ok.

Now, let's go to the true villain in the case but it does not have anything to do with the direct murder of the officers. I want to be quite clear on that. And by the way does the fact that Brinsley is black have anything to do with the African-American community? No. Just as if a bad cop does something you cannot condemn all police. You cannot condemn blacks because of what Brinsley did. Everybody should be clear about that all right.

All right. Bill de Blasio as I said is incompetent. He was elected in an election in New York City that few people voted. He was a machine politician. And he is an anti-police individual. Now he is in trouble. Now he is trying to backtrack. But he has been anti-police his whole career.

Who is his best friend? Al Sharpton. Al Sharpton -- a racial provocateur an anti-cop individual is de Blasio's best friend. That says it all. De Blasio actually is proud that he told his teenage son that he may face quote "dangers when interacting with the NYPD. What kind of a responsible father tells that to his son? Then after witnessing because it was on videotape, two police lieutenants get beaten by a mob the mayor of New York City says it was an "alleged beating". That insulted every single -- every officer, all 35,000 NYPD were insulted. "Alleged" -- you saw it with your own eyes, you pinhead.

This is an individual who should resign today -- today. He cannot run the city. He has lost the control of the police department and the respect. They will never come back no matter what he says. Because he sided with the protesters -- that's what he did. And he associated with the provocateurs and he has disgraced the office of mayor of New York City. He should resign.

Let's see if I left anything out. I just want everybody to read what Jaden Ramos the 13-year-old son of one of the slain officers is posted on the Internet. Everyone should read that. That makes it come home to everybody that these two police officers were stellar individuals and their deaths will have a cataclysmic effect on their families. You know, I'm just really angry right now.

GUTFELD: I can tell.

O'REILLY: All right. So I think I have covered it.

Bill -- thanks so much for calling in.