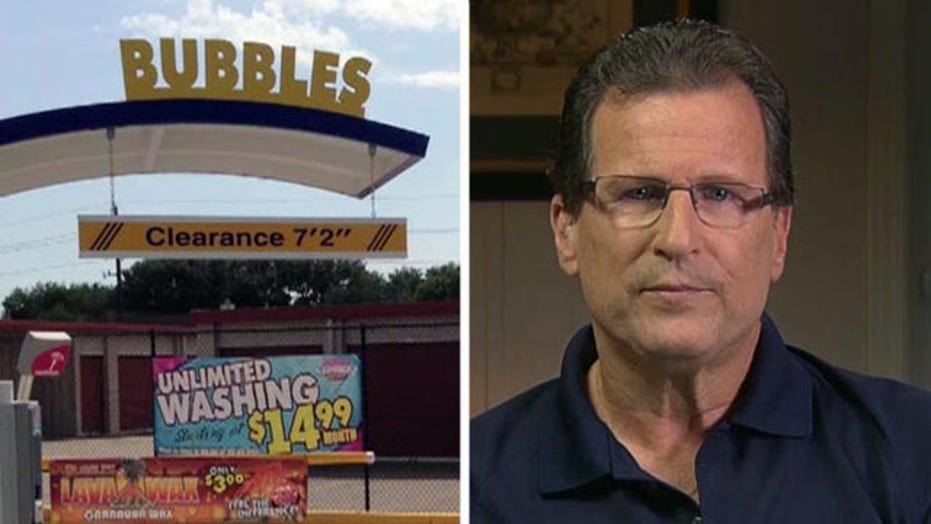 This is a rush transcript from "The Kelly File," November 1, 2013. This copy may not be in its final form and may be updated.

MEGYN KELLY, HOST: We have been asking for your ObamaCare stories this week and we have been flooded with them on facebook.com/thekellyfile and on Twitter @megynkelly, use the #kellyfile. People have been writing in nonstop including Bill Lawrence, who is a former owner of a successful car wash company that he built from the ground up 22 years ago.

He wrote to us. His post reads, "Megyn, I know you don't read every one of these, but my story rings so true to what you have been reporting on. On June 26, my partners and I had to sell our company because we couldn't afford the almost $400,000 in either penalties and fines or insurance premiums that we would have to pay as a result of ObamaCare."

Well, we did read his Facebook post. We read virtually all of the other ones. Bill Lawrence joins me live now. Bill, thank you so much for following us and for sharing your story with us. I understand you built the company from the ground up. You employed 290 people. You sold the business, you say, because of ObamaCare? Why?

BILL LAWRENCE, FORMER BUSINESS OWNER: Well, Megyn, we were forced to take about 200 of our associates and either provide them health insurance coverage at a significant cost or more likely pay the penalty if they didn't go into the plan or pay a higher penalty if they went into the exchange. The math was somewhere around $400,000. We just don't have those margins to pay that type of penalty.

KELLY: So when people have been talking about a lot of employers will do the math and say it is cheaper to send them to the exchanges and pay the penalty versus pay for the insurance, they forgot the other option which is, or an employer might say, I cannot afford either option. I'm getting rid of my company.

LAWRENCE: Megyn, it was sad because back in March in anticipation, we started taking our employees to part-time associates under 30 hours.

KELLY: For the reason stated in the piece we did.

LAWRENCE: Megyn, I don't know exactly for sure. I believe that they are taking the staff to a part-time basis. We were doing it because -- we started doing it in March because you have a certain look back period in which you have to average what the employee looks like, are they full time or part time.

KELLY: Right. It doesn't just start like, OK, on this date forward you have to --

KELLY: Start insuring people. You have to consider the look-back the law will have.

LAWRENCE: Right. There is a look-back period so we started doing it. Megyn, sometimes what people don't talk about is what is the effect that has on the associates? They still have to feed their families. They still have to provide income for their households. Now they are working two jobs. What happens to the quality of their life?

KELLY: What happens to the people you were insuring? While many of the employees weren't getting insurance, some were and now they have lost their jobs with you and lost the plan you were offering, I take it.

KELLY: Bill, I know that you built up the car wash company up, Bubbles Enterprises, the aptly named Bubbles Enterprises. You paid your employees more. They worked at the car wash. You paid them above minimum wage thinking I will give them extra for something like health insurance. You thought that got it done. The government disagreed. Your thoughts on having your livelihood directly affected based on what politicians in Washington felt was best for you.

LAWRENCE: Megyn, well, most of the people we employed were young males in great health, who didn't want insurance and can't afford it. Now the government will penalize and fine them, make them get health insurance. It's just a train wreck waiting to happen.

KELLY: I know in addition to being a successful businessman you are a Republican. You raised money for some Republicans in the past. Is this a partisan thing about disliking President Obama?

LAWRENCE: No. It has nothing to do with President Obama. This law is not a good law. I have never seen a set of laws that have impacted small businesses the way this law has, everything from the regulatory process to hiring consultants, just so you understand what the law is. We know that our congressmen and senators didn't read it. How are we supposed to understand it?

KELLY: Thank you for being here, Bill. Goodbye to Bubbles Enterprises. I know you sold it to Mr. Carwash, so hello to him. Thanks for sharing your story.

KELLY: We want to hear your ObamaCare stories, good, bad or in between. So far, we have received thousands of them. Two nights in a row we have had real people on who tweeted their stories or updated posts on facebook.com.

So you can go to facebook.com/thekellyfile or you can send me a tweet me @megyn kelly, #thekellyfile. We are reading them. I read them, many of them, personally on my iPhone, on my way home, on my way to work. I hear a lot of the stories. We are interested in what you are going through. Keep them coming.