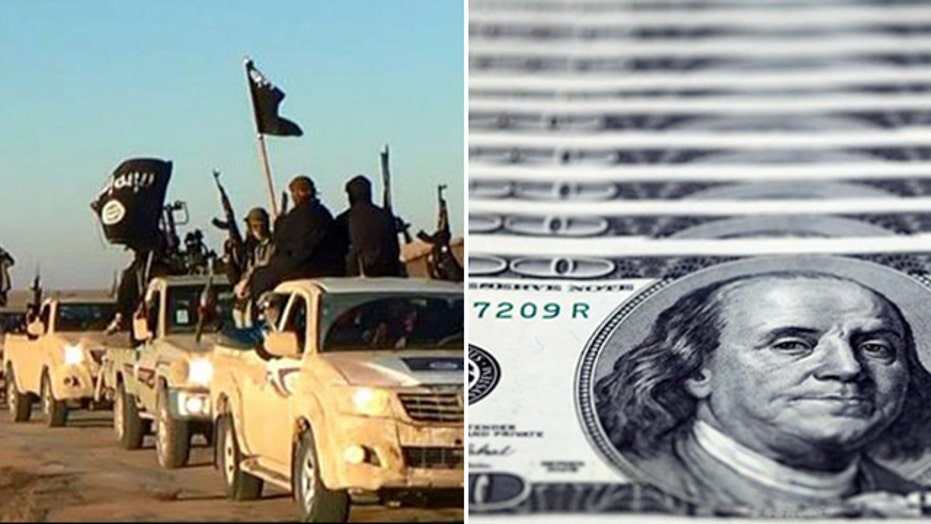 Temporary tax hike to help fund US fight against ISIS?

NEW PUSH FOR A "WAR TAX" TO HELP FUND U.S. FIGHT AGAINST ISIS

Melissa Francis: A temporary tax? There is no such thing. Once they get a tax in place, it never goes away. I know how you find the money. Eric Holder says Medicare fraud adds up to as much as $90 billion. The IRS says tax refund fraud is as much as $21 billion. I just found you $100 billion of my money leaking out on the sides. Use what you are getting already.

John Layfield: I agree with Melissa. There is no such thing as a temporary tax. I understand. The first federal income tax came in the first civil war and made permanent in world war ii when holding tax was introduced in world war i tax be made permanent. We put a tax in place, it's going to stay there. 20 percent of our budget goes to defense spending. 55 percent goes to defense. If we have something like Afghanistan or Iraq occurs again, once we bump that cap, we are already issuing war bonds. They are treasuries being bought by china instead of 85 million Americans that bought them during World War II. We are deficit spending. Put a temporary tax in place that covers the war but has to go to a vote to the American people and once that war is over, the tax stops.

Jonas Max Ferris: Look at the damage Russia could do with their limited budget. I like paying for ongoing perpetual defense budget that seems to exceed what it allocated for these wars. I don't want our enemies to think there are more bureaucratic steps. You want them to think we can come in any time with unlimited money to destroy you. That's how you keep people from becoming like ISIS because they don't think we are going to join up with a force. You don't want to pad the tax. It's an ongoing cost and acknowledge it like Iraq war said more than we said. We would have had to raise taxes. You don't want to start another barrier and embolden our enemies.

Sascha Burns: I agree with that. I like the idea of the American people having skin in the game when we are talking about war. If you think about the tiny percentage of people that serve in the military and the burden that the military families have that the rest of us really don't know anything about. I think if you had a national draft, a surtax, people would think harder about whether they wanted to go to war or not.

REAGAN: GOV'T IS NOT THE SOLUTION TOO OUR PROBLEM, GOV'T IS THE PROBLEM

John Layfield : You better believe president Reagan had it right. We are 34 years later, about $ 18 trillion in debt later and people are fed up with the government. We have a government who can't agree on what to call our enemy. We are not talking about fighting our enemy, but what to call the enemy. They spent the last week on the Hillary e-mail deal. Instead of immigration, tax reform or some type of national energy policy. We have a government that wants to sit there and get re-elected. I believe this is the worst government in the history of government in the history of the world.

Jonas Max Ferris: Look further down the survey. The Gipper is talking about the size of government and tax rate and reducing it. These people don't like the way government is bickering and not getting their stuff done. That's not for reducing the size of the government. Only 1 percent of the people in the survey think taxes are a problem in America. A lot of people, the government is not a problem, it solves their problem. That's why it grew to do this thing to be a problem solver, pus kids in school. It creates a problem for the other side to pay for that. They redistribute problem from one hand to the government.

Gary B. Smith: Most people aren't against taxes because most people aren't paying a lot of taxes, that's number one. Number two. At the start of the century, the government, total government spending was 10 percent of GDP. Now it's 33 percent GDP. In the last however many hundred years have we gotten anything really out of it? I'll give the government props on national defense. We need that. Government is problem solver, really? I'm looking at health care.Org, thinking the mess at the V.A. Hospitals. I'm thinking of the highways that are crumbling. Everything government done is over budget and overtime. I don't see them as problem solvers. I see them as problem creators.

Melissa Francis: I totally agree. I think the government's mission any time they set out to do something it should be are they protecting my personal liberty or not? If that's not the goal, they shouldn't be doing it. The problem is they are just really bad at solving problems, even when they have good intentions. You look at the food stamp program. They want to feed children and families. That's a great idea. It's such a leaky sieve, they do a terrible job. Government cannot solve problems. They are terrible at it. Why do politicians go to Washington poor and leave rich? Not because they are making a lot in legitimate salary.

Sascha Burns: I think that only 18 percent said the government is the biggest problem because you have 95 percent that say Congress is a mess. Who are the 5 percent that think it's doing a good job, I have no idea. One thing i definitely see is for four months in a row with government being the biggest problem named in the survey, that means people are feeling so much better about the economy. It's not up higher on the list than the government.

Gary B. Smith : Why do we love government? It's because of crazy stuff like this. They're claiming mental anguish over this. You know what the lawsuit gives them? It gives them $7.25 an hour covering five days. Are we trying to pay people out there -- not trying to denigrate everyone's financial situation, but that loss of $290 just for those days, since they got paid, many were able to claim unemployment benefits, and many to make up the work got overtime. They benefitted from this. Are we saying that's worth a lawsuit? Only in the U.S. Government it is.

Jonas Max Ferris: This is a ridiculous way to stop the government. The whole point is you wouldn't work for somebody who just stopped paying you arbitrarily. If ups didn't pay people, they would say i want a 20% pay increase because of the risk of that happening. The opposite of stock options. It's only going to be worse and employees want to work for the government and want higher wages. This is going to hurt all taxpayers for many years to come.

John Layfield: Absolutely. 100 percent The fault of congress. I'm not a fan of ambulance-chasing lawyers, but the worker going to work and wanted to go to work, that was expecting a check from the government, they have rent payments, car payments, bills coming due, it is not their fault at all. The government deserves to compensate them not only for their work or anything else. I'm not about this mental anguish stuff. If it caused them problems, the government should pay for this. These idiots in congress get this for shutting down the government.

Melissa Francis: I'm all about the mental anguish. I looked up what that means to qualify. It says was the event long term? Did the guilty party stalk you, harass you by phone? Do you have nightmares? That describes my relationship with the IRS. I'm going to start my own class action lawsuit against the government and it's going to be a big one.

Sascha Burns : I'm with john. It's a silly response to an underlying real problem which they did deserve to get paid. If congress wants to act like school children, it shouldn't be at the expense of the federal workers. What makes more sense is pass a law if they are going to shut the government down again, the workers get paid on time.

Gary B. Smith: 2 LINE - FROZEN 2 AND CINDERELLA HAVE