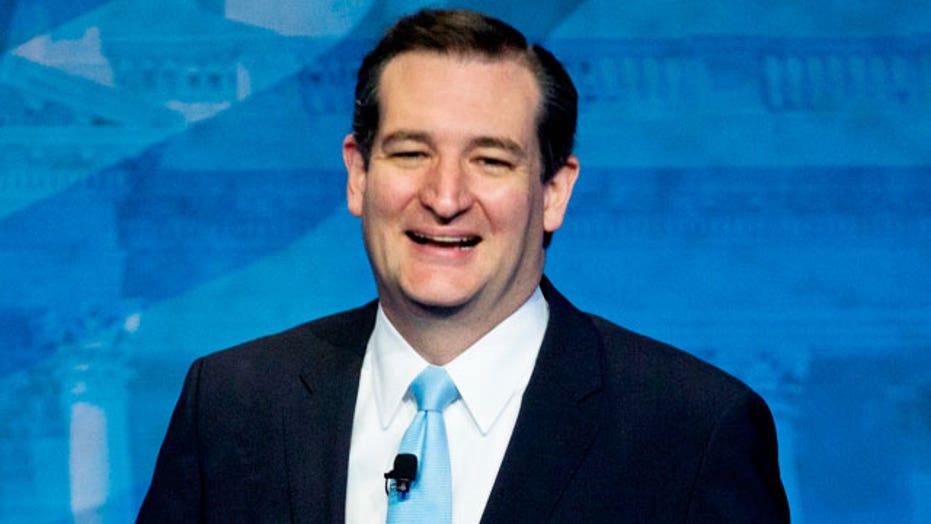 Bernie Goldberg on the media's treatment of the presidential hopeful

O'REILLY: Thanks for staying with us. I'm Bill O'Reilly. In the "Weekdays with Bernie" segment tonight, an amazing TV confrontation in Texas. Happened on Tuesday when a local reporter caught up with Senator Ted Cruz.

UNIDENTIFIED MAN: You have a personal animosity against gay Americans?

SEN. TED CRUZ (R), TEXAS: Let me ask a question. Is there something about the left, and I'm going put the media in this category, that's obsessed with sex? Why is it that the only question you want to ask concerns homosexuals? You're wincing. You don't want to talk about foreign policy. I recognize you want to ask another question about gay rights. Well, you know, ISIS is executing homosexuals. You want to talk about gay rights, this week was a very bad week for gay rights because the expansion of ISIS, the expansion of radical theocratic Islamic zealots that crucify Christians, that behead children, and that murder homosexuals, that ought to be questioned you far more than asking six questions all on the same topic.

UNIDENTIFIED MAN: Do you have personal animosity against any Americans --

CRUZ: Do you have a personal animosity against Christians, sir?

CRUZ: Your line of questioning is highly curious.

O'REILLY: Joining us now from Miami to react, the purveyor of BernardGoldberg.com, Mr. Goldberg. And you say?

BERNIE GOLDBERG, FOX NEWS CONTRIBUTOR: Well, what I say will please nobody, let me say that first. I'm not a fan of Ted Cruz, but on this, he makes a good point. What he's saying essentially to the reporter is, why are you putting me in the cross hairs when it comes to gay rights? Why aren't you questioning America's foreign policy where ISIS is killing gay people? Isn't that more important than anything I might feel about gay rights and gay marriage? So on that, it's a got point. I'm with Ted Cruz. But why would a reporter ask a conservative Christian republican running for president if he has animosity against gay Americans? Well, two reasons.

One, he's trying to make trouble. We know that. He's trying to get a headline. He's trying to trip up Ted Cruz. Okay. Granted. But the other reason is that there are more than a few conservative Christians. I'm not saying a majority or anything like that. But more than a few who not only are against gay marriage Bill, but detest gays, period. I know this because when I come on this program and say, I'm for gay marriage, I don't only get emails from people who are against it -- fair enough. Reasonable people can disagree on that. I get emails from people who writes the most vile things about gays, and they proclaim their Christianity. And I know for a fact that you get the same kind of emails.

O'REILLY: Yes, but they're not many.

O'REILLY: I have to say, I don't get many of those. The fringe is different. But here, let me define how I see this Ted Cruz thing --

O'REILLY: I see most of the emails that float in here, it's a very small percentage who are attacking gays fundamentally because they're going to hell, very small for me. But look, I applaud Ted Cruz for doing what he did. There are two reasons. Number one, this anchorman, okay, in a week where terrorism is running wild, all right, and the economy is by far and away, by every poll the most important thing for most Americans, chooses to do a niche question, that Senator Ted Cruz didn't have anything to do with. It's a Supreme Court play now. So, Cruz doesn't have anything to do with it. Whatever he thinks about gay marriage doesn't matter to the country. And he does it just as you pointed out, to be provocative, to make a name for himself.

O'REILLY: So, I liked what Cruz did. Cruz called him out. And I'm going to say this -- the republican candidates better start doing what Ted Cruz just did or the media is going slaughter them in the upcoming campaign. They better -- to every reporter who baits them, every reporter who goes after them on these niche ideological things, should do exactly what Cruz did. Go.

GOLDBERG: Okay. A couple of things. One, Cruz is right, the media don't go after liberal democrats the way they go after conservative republicans. They don't ask Hillary Clinton how do you feel about late- term abortion. And when she gives her answer saying, wait a second, just because the mother is depressed, you think it's okay to kill an 8.5-month- old baby. So, they don't go after them with the same zeal as they go after conservative republicans. But Ted Cruz could have said, of course I have no animosity against gay Americans. Next question. But you know why he didn't? Because every republican lives in fear of the organized Christian right. There may not be a lot of people in the organized Christian right, but they have a very big megaphone, and they live in daily and deathly fear of what they would do --

GOLDBERG: If you even say, oh, I have no animosity against gays, that's what they're afraid of.

O'REILLY: Listen, that may be true, but I don't know it in this case. Cruz, a pretty gutsy guy. And I don't know if he's afraid of anybody. But I'll tell you what. When I saw that soundbite, I went, yes, that's what you have to do. Every republican to stop the media dishonesty. And I thought Cruz -- I'll stand by what I said. And you know Bernie, you're right. Nobody -- nobody liked what you said tonight. Nobody. You were absolutely right. You're very perspicacious.

GOLDBERG: Thank you very much.