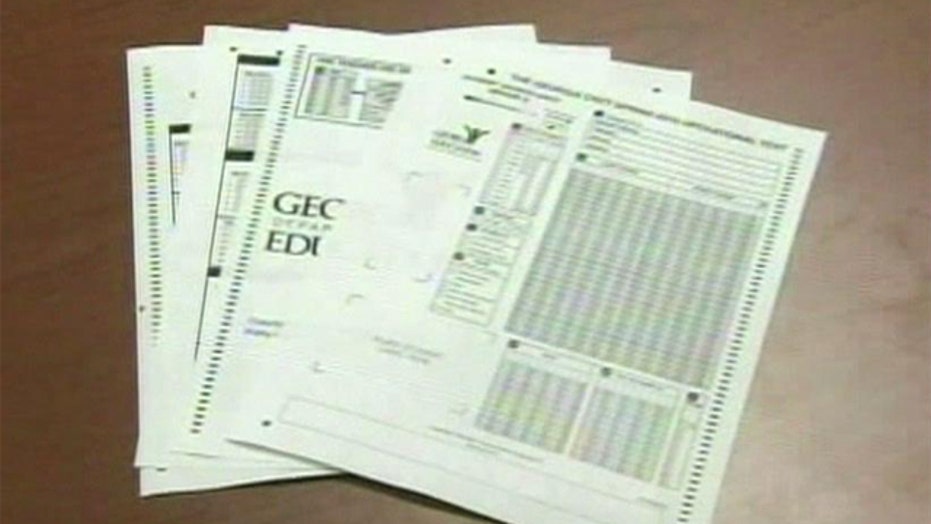 KIMBERLY GUILFOYLE: Blame the teachers; they're the ones that are failing forward and fast. I mean, increasing their salaries and getting bonuses and retiring with pensions, while we are graduating kids that can't even read-- maybe at a fourth or fifth grade level- that are illiterate, that are a burden to the economy because they're not going to get a good job to support themselves. We've become welfare and entitlement dependent. I am giving the teachers a big "F" on this one. Plus, they're little crybabies; they want to blame it on the test, blame it on the system. That's the way the union rolls.

JONATHAN HOENIG: I blame the teachers, but I also blame the tests. They are both products of the public school system- a government-dominated school system. There's a reason why cheating is much more widespread in government schools and public schools versus private schools. Some estimates actually two times as much more prevalent- not only among the students, but among the teachers, as well. There's been incidents like this in Philadelphia, for example. You have a centrally planned economy where funding is determined by arbitrary tests. Of course teachers are going to cheat. And of course parents, who are forced to support these schools because of taxes, have no real recourse to cut them off.

JULIAN EPSTEIN: There is no excuse for this. It is not just teacher salaries, it's resources for the schools that are at stake with No Child Left Behind and Race to the Top. There is absolutely no excuse for this. This is a total scandal. This hasn't just occurred in Atlanta; it's occurred in about six or seven other cities, as well. You have to give the Obama administration and the Bush administration credit for sticking to their guns on the importance of standardized testing, and the importance of merit pay for teachers in terms of important reforms in public schools. That said, there is, I think, a worthwhile debate about whether we are spending too much time and emphasis on testing. In some schools teachers are spending 60 to 70 days out of the school year on test preparation. There are other measures in terms of education reforms, other than just testing. So while there is absolutely no excuse for the teachers, that should be punished, there's no excuse for cheating anywhere.

TRACY BYRNES: They're blaming the test because there's no other excuse for it. Who else will you blame? You can't take blame yourself in this day and age for something. My kids will be the first to tell you that all they do is prepare for tests lately. At the same time, these teachers came to this profession for a reason. Do your job. There are so many great teachers out there, and every time we hear a story like this it kills the entire profession. We need the standardized tests, but we also need other ways to measure these kids and measure our teachers.

ALLEN WEST: It is a pleasure to be with you. This is absolutely asinine. It's funny that the Fox Saturday morning business block is called "Cost of the Freedom." That's exactly what this is. It's going to cost you to exercise your second amendment freedom, your right. This is the quote from Ms. Maloney: "For too long, gun victims and society at large have borne the brunt of the cost of the gun violence. My bill would change that by shifting some of that cost back onto those who own the weapons." So in other words, what Representative Maloney is saying, that I as a gun owner in Florida now have a shared responsibility for the gun violence that occurs in Chicago or Detroit, or any other place in America. That is a horrible way to look at people who are trying to exercise their second amendment freedoms. Also, think about the single mother who is living in a rough neighborhood and wants to protect her children in the home. Think about the young lady or the young man who works the night shift, and they want to be able to take of themselves. Think about the elderly couple who live in a rough neighborhood, and they want to be able to protect themselves against intruders. She is saying to them "you don't have a right to own that weapon. You are part of the responsibility of gun violence all across this country." That is just a horrible thought process.

JONATHAN HOENIG: Regulation is a cost. It is a cost not levied on criminals, but levied on innocent producers and consumers. There is a yearly regulatory cost in this country of almost $2 trillion- that's actually more than the total amount of income taxes that are paid every year. I think what' most disappointing is that it doesn't do anything to keep food safe, to keep stock brokers moral, to keep education good- all the areas of high regulation. All it does is make problems on the areas more difficult to detect. I am bearish on commodity prices, but no question, regulation increases costs.

TRACY BYRNES: Where I come from, we find muscle cut meat at the local gym, otherwise that's it. I don't want to see it on my chop meat in the food store. I don't want anybody to tell me anything more than this is really good and it's on sale, and I could take it home. I get restaurants might want to know about this. I get some of the detail might be really important to them if they're making something special. The American people don't need to know.

JULIAN EPSTEIN: Cattle rangers are increasingly giving their livestock hormones. Fish farms are giving the fish hormones so that they will grow bigger and plumper. As a result, they often have to give them antibiotics because they get infections. I want to know if the meat or fish I am eating is coming from a country that gives their livestock excessive amounts of hormones.

TRACY BYRNES: Walgreens announced this week that they're going to start putting nurse practitioners and physicians assistants in their clinics so that these guys could diagnose diseases and things. This is crazy! Is this where we're going because of ObamaCare?