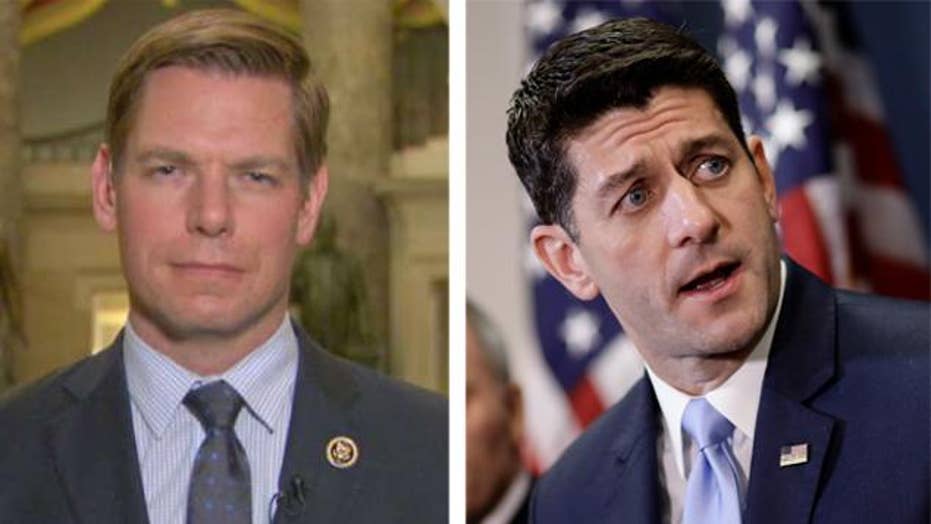 NEIL CAVUTO, "YOUR WORLD" HOST: Man, oh, man, Nancy Pelosi must have incredible lungs. She's been doing this for the better part of, what, six hours now, a talkathon courtesy some say is given to leadership in the House, regardless of whether you're on the left or the right.

What she is complaining about is a budget member -- that doesn't connect itself to DACA or dealing something with these kids of illegals who got here. They're no longer kids, of course. Many of them are well past being adults. But she wants guaranteed protections for them in any budget measure.

In the Senate, they have called for a separate measure. They have promised that will come up in the weeks, months ahead. I believe Speaker Ryan has said the same. I believe that Nancy Pelosi wants them joined at the guaranteed hip here.

Democratic Congressman of California Eric Swalwell with us right now.

Congressman, thanks for taking the time.

CAVUTO: Do you support her in this effort?

SWALWELL: Well, I support, as most Republicans do, bringing the DREAM Act forward for a vote.

Actually, I heard her read the name of Jose from Hayward, California, one of my constituents who wants to be a police officer. This country is the only country he's ever known. And I think we want people like him to be a part of our country.

CAVUTO: All right, I'm sorry I wasn't clear on my question, sir.

Would you say no to this budget accord if it did not include such a guarantee?

SWALWELL: Yes, we're waiting for the Senate deal to be sent over.

SWALWELL: We haven't seen all the numbers yet.

But here's what I can tell you, Neil. Three out of four people agree on what the compromise should be. Mitch McConnell, Chuck Schumer and Nancy Pelosi are in agreement that the compromise is that we vote on this spending deal and then we have a vote on the DREAM Act.

Paul Ryan is isolated, in that he doesn't agree on that. I think he should come around and let's get all four of them on the same page and have a two- year budget.

CAVUTO: See, I thought he was, sir. You're closer to this than I was.

That he was going to promise a vote on this. And you don't believe that?

SWALWELL: No. If he does promise a vote on the DREAM Act, Paul Ryan, I think you are going to see bipartisan support and over 300 members in the House voting for it.

Do you think this is worth, whatever your thoughts on this, shutting down the government?

SWALWELL: Well, I think, again, we have to consider the deficit as well.

This spending, an additional $500 billion, blowing the caps, right after a $2 trillion tax cut was just given out to the richest in our country, I think you have to step back and look at what that does to our economy as well.

So, put all of that into focus, try and compromise where you can. And one of the issues we want is the same deal that the Senate got. And I don't understand why Speaker Ryan can't make that assurance, because I think you will see widespread support, finally, for a long-term funding bill.

CAVUTO: All right. By the way, his office has said they have made this commitment. But I don't know what the truth is, so I will...

SWALWELL: Yes. No, if that's the truth -- if you're breaking news right now to me, Neil, then I'm excited.

You don't seem to mention the additional $10 trillion in added spending that is going to add to the debt over the next 10 years in that same plan. But I know both parties play this game here.

Are you concerned that the markets looked at this today as a sign that -- say what you will of those caps, Congressman. They were a backup sort of a spending backbone for both parties to sort of rein in at least the growth in government. And now they're gone. Does that worry you?

SWALWELL: Well, it does worry me, particularly on the defense side, that the defense side will continue to outpace the domestic spending, investing in modern schools in our communities, so our kids can compete in this country, and that we don't need so many high-skilled visas.

And we have to look at that problem, Neil. Why do we need so many high- skilled visas? It's important to have an educated work force. But we need to invest in our own kids, too.

CAVUTO: But I'm just saying these have been repeatedly blown over the years since they were implemented.

So, some interpreted this -- I'm going to introduce you to my wonky world here, and it's nerdy -- and you're not. So, if you will indulge me...

SWALWELL: I will try and come in.

CAVUTO: Yes, really, really. You're too cool for that.

CAVUTO: But, anyway, one of the things that I have noticed is that it's like the bond market gave up on you guys, and that you're not going to show any discipline, so they have just said the hell with you.

SWALWELL: Well, I think that we shouldn't give up on retraining our work force, investing in kids, and that the return on the economy is going to be Americans who can compete in this economy with a work force that is also of immigrants.

But, right now, what I see is just more and more defense spending. That very much does concern me, Neil, because we are at peacetime right now. We don't have any active ongoing military presences, like we saw in...

CAVUTO: So you don't agree with Defense Secretary Mattis, who said, no, we're in a perilous kind of a situation?

SWALWELL: As far as readiness, no, we need to assess the threats that are out there.

CAVUTO: So, if Nancy Pelosi on this issue, however passionately she feels about DACA and all this stuff, and wanted to bring it to a brink here, would you support her on that?

SWALWELL: Well, again, I'm going to wait and see and hope that we can strike a deal.

But, again, I think what she is asking for is not unreasonable. She just wants the same deal that Mitch McConnell and Chuck Schumer reached. And I don't see why Paul Ryan would want be isolated in that, knowing that there would be widespread support for it.

CAVUTO: All right, again, I don't know who is right on this.

But, Congressman, thank you very, very much for taking the time.

SWALWELL: Yes, my pleasure. Thank you.

CAVUTO: We did hear, as the good congressman was speaking here, from a Paul Ryan spokeswoman, addressing this, saying that, "Speaker Ryan has already repeatedly stating we intend to do a DACA and immigration reform bill, one that the president supports."

Now, I'm not quite clear as to whether that differentiates itself in any way from prior positions either he's espoused or Mitch McConnell has espoused, but, again, Speaker Ryan's people seem to be saying Nancy Pelosi is wasting her time.

Nancy Pelosi, who has been speaking the better part of six hours, seems to feel she is not. And therein lies the rub -- much of the financial community confused, stocks down, interest rates backing up.