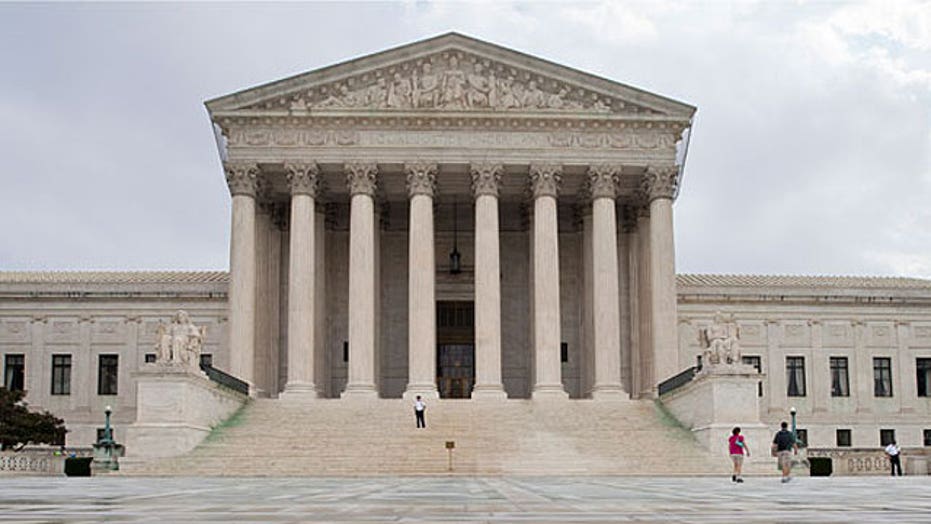 Dana Perino on what the decision means for the 2016 campaign

WATTERS: In the "Personal Story Segment" tonight: two hot topics. The Supreme Court handed down a major victory for Obamacare today and the President harshly scolds a heckler at the White House. You may be surprised about who is doing the heckling.

So first the Supreme Court decision. President Obama had a victory lap today. Take a listen.

BARACK OBAMA, PRESIDENT OF THE UNITED STATES: Today after more than 50 votes in Congress to repeal or weaken this law, after a presidential election based in part on preserving or repealing this law, after multiple challenges to this law before the Supreme Court the Affordable Care Act is here to stay.

WATTERS: So the law is written to say that these states have to create these exchanges and if they don't, they don't get the free subsidies.

WATTERS: Now Scalia was fuming in the dissent. And he said listen, words mean something. You can't just change the meaning of words. I mean -- and now I guess you can be a white person, you can say you're black these days, and men and men can get married and everything is crazy. But that's the point that now Roberts has twice done some gymnastics here and saved this law out of thin air.

PERINO: So if you are a strict constitutionalist, you read Scalia's dissent and you think I agree with everything that he is saying there.

PERINO: And that would be me. But, here's the thing. This is the reality. Ok. So the Supreme Court has ruled. They've ruled twice on Obamacare. President Obama in the Rose Garden today was feeling his oats and he has a right to -- ok.

So he's taken the victory lap. Now to the victor go the spoils and the rest of us have to deal with Obamacare. The thing for Republicans going forward is that they have spent the last six months preparing for today because they didn't know what was going to happen. They were either going to lose and then have to figure out a way deal with that coming up in the 2016 election or win and then have to deal with it immediately.

WATTERS: Right. And you know, secretly we're hearing from Republicans in the Senate that are just breathing a sigh of relief that this happened. Because they were going to get blamed for it. It was going to be chaos. There was going to be a medical catastrophe. No one has insurance. It's crazy.

Let me get back to Roberts for a second -- ok. This is a GW pick Perino.

PERINO: I remember it well.

WATTERS: I mean this is now twice that this guy has gone against conservatives in huge decisions. Is there any regret going on out of the W camp right now, do you think?

PERINO: Well, a couple of things. You know, fun fact I was the spokesperson for John Roberts and Justice Alito when they were going through their confirmation so I got to know them very well. I would say almost universally John Roberts was considered the very best pick that George W. Bush could have gone with. In fact, in the legacy interviews on the way out the door, people talking about George W. Bush would say John Roberts, that was the best decision of his presidency.

Now, there are some conservatives today who are really mad and don't believe that.

WATTERS: Yes. I don't know about that anymore.

PERINO: Now they're mad about -- they are really mad about healthcare. But there are other decisions that Roberts has made that people would say he is our guy. But yes, there is widespread disappointment by some conservatives which is why, while some Republicans might say thank goodness we didn't have to deal with this actually we can move on now. I actually think it cuts another way.

Conservatives are demoralized with this decision. They are bummed. They don't believe that this is actually ever going to be repealed and they could be right.

WATTERS: Do you know who is psyched right now? Gruber. Remember Gruber was the one that put this language in and then went out and embarrassed the entire administration saying the public is stupid. We got it passed in the dark. Could you imagine if this had gone the other way? He probably would fear for his life.

PERINO: And another thing if you want to look at it from a just purely political standpoint, leading up to the campaign Hillary Clinton now is having to get closer to Barack Obama on Obamacare which is the singular most unpopular law in a generation.

Now also we have the President -- it was yesterday out at a gay press conference or some soiree at the White House. And he was heckled. Let's take a listen.

OBAMA: As a general rule, I'm just fine with a few hecklers. But not when I'm up in the house. My attitude is if you are eating the hors d'oeuvres, do you know what I'm saying? And drinking the booze.

WATTERS: So the President kicked a transgender illegal alien heckler out of the White House.

PERINO: Equal opportunity. You going to heckle, you're going to get kicked out.

PERINO: I think that it was fine. I think one of the things people took offense to is he said "you are in my house". It is the people's house. I actually think it was charming.

I'm going to tell you something else I really liked about that.

PERINO: Joe Biden was having a moment of levity and able to laugh.

WATTERS: That was nice to see.

PERINO: And I think that -- this basically says, even if you come to a transgender event at the White House, you can't be rude.

PERINO: That's not a bad thing.

WATTERS: That's true. We are going to kick everybody. That's probably the first illegal alien the President has deported.

Now real quick, gay marriage in the pipeline for the Supreme Court may come tomorrow, probably Monday. What's your prediction?

PERINO: Well, I don't know how the court will rule. I do think public opinion is moving faster than the courts are on this. It will be definitive, hopefully, I think for this movement and I don't think it will be a wedge issue in 2016. I think that has moved on to legalized marijuana.

WATTERS: All right. John Roberts in the spotlight for that decision too.

PERINO: Is this your world?

WATTERS: I know. It feels it, doesn't it?

All right. Dana -- thank you. By the way, Dana's book "And the Good News is" continuing to be a big best seller. Be sure to check it out.