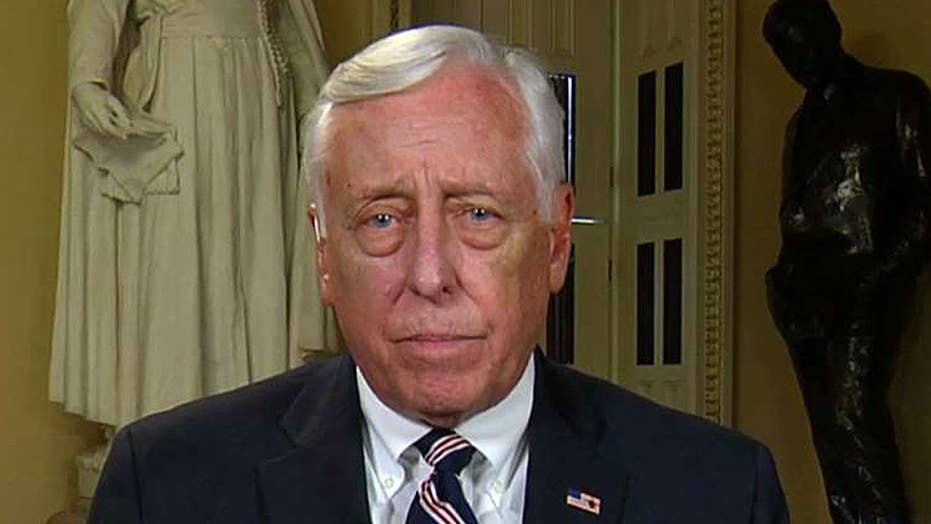 Steny Hoyer: We need to be able to pay for tax cuts

And I'm wondering, Congressman, are you confident, or do you see the possibility that some Democrats can vote for these tax cuts?

But they estimate the cost at $6 trillion. And, frankly, the White House...

And, essentially, what they're saying is, it doesn't have to be paid for. Frankly, I think we have gotten into deep debt in our country since I came here largely because we didn't pay for tax cuts. And they didn't pay for themselves, notwithstanding the fact that that was always the argument.

CAVUTO: But I believe under the last eight years of President Obama, that debt essentially doubled. Right? It went up $10 trillion. And that was not courtesy of big tax cuts. That was courtesy of a lot of spending.

HOYER: Yes, getting us out of a very deep, deep recession, the deepest you and I have experienced in this country, as a result of people saying in 2001 and 2003, boy, if you pass these tax cuts, the economy is just going to boom and everything is going to be wonderful, we're going to create all kinds of jobs.

And, very frankly, the debt was increased by 87 percent under George Bush. And we were in the deepest recession that we have seen. So...

CAVUTO: No, I understand concern about the debt, and given your history and the time there.

HOYER: No, I understand that.

CAVUTO: It just seems odd when I hear Democrats talking, Congressman, about this alarming concern for the debt, when I didn't hear it over eight years, you know?

HOYER: You have heard that from me for a long time, Neil, I think, if you're going to be honest.

And you have heard me discussing this for a long time.

CAVUTO: So, what do we do now? Let's say the Federal Reserve, Congressman, is out of the stimulus business.

CAVUTO: Shouldn't it be up to fiscal policy for you guys to stimulate? And would you be open to a tax cut of any sort?

HOYER: Sure. I think we certainly need tax reform. I think everybody agrees.

And everybody, I think, agrees. Obama suggested that we bring the corporate tax rate down. So, I think there's a consensus on that. But I think that's probably where the consensus ends.

CAVUTO: So, you would be OK if it was just the corporate tax cut? You wouldn't -- I don't think you're -- I think you're on record you wouldn't want to go as low as 15 percent. But what would you be open to?

HOYER: Neil, I don't have a figure in mind.

We talked the high 20s or middle 20s. Maybe that's the right number. I don't want to commit to a number at this point in time.

CAVUTO: Well, it looks like everyone is going to get a break here.

HOYER: Well, we will see.

I'm one, for my own party and for the other party, I have said we need to pay for tax cuts. David Camp, chairman of the Ways and Means Committee, Republican from Michigan, put forward, very frankly, what I thought was a very responsible -- that doesn't mean I supported every part of his bill, but a very responsible bill that had...

HOYER: You know, he brought rates down. He eliminated some preferences. It was a zero-sum gain, in the sense that it was not...

CAVUTO: No, you're right. The former chair, he did a lot of that.

One of the things they have talked about, Steny, is try to lower, you know, what you could write or limit deductions for state and local taxes, for example. Do you support that?

HOYER: Well, let me tell you what I did support, Neil, which is similar to that.

President Obama suggested a 28 percent cap on deductions. I support that. And what that means is, the individuals themselves decide what preference they want to take advantage of, whether it's charities or whether it's mortgage interest.

HOYER: Whatever they want to take.

HOYER: But my view is, that is a much better way for us to do it, because then the individual gets the chance to choose what they want to take advantage of.

And it also provides that people will also contribute some of their income to the support of the government, which helps them greatly.

CAVUTO: All right, but what about the idea the president has to sort of have a tax forgiveness or a 10 percent rate on money returning that is held abroad, $2.5 trillion, $3 trillion, and use a lot of that potentially, potentially, for infrastructure spending?

Would you support that?

HOYER: I think we ought to pursue that. I think that is worth discussion. I think we could possibly get agreement on that.

Obviously, repatriating whatever the -- whether it's $2 trillion, $3 trillion, whatever is held overseas, first of all, companies would like to repatriate that. They are not going to do it at present rates. And I think that is something we can discuss and I think has some possibility of reaching agreement on.