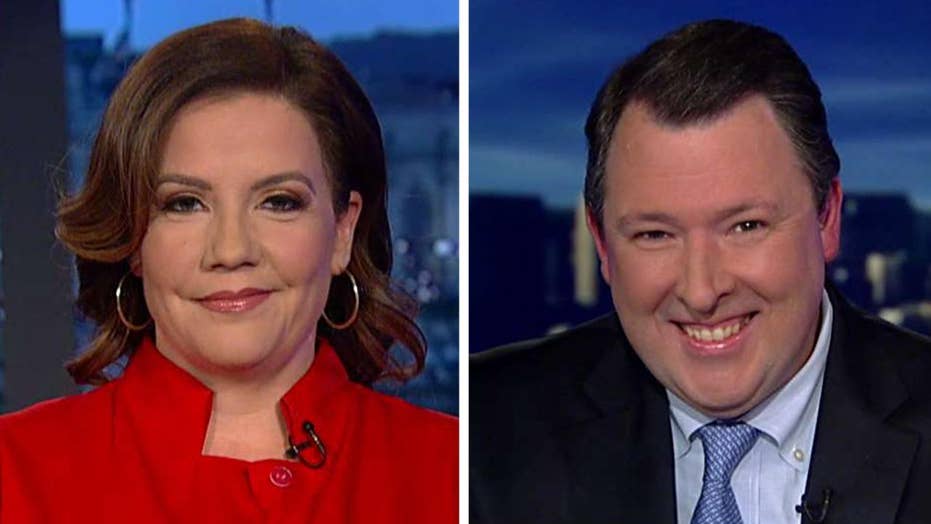 This is a rush transcript from "Special Report," October 18, 2019. This copy may not be in its final form and may be updated.

BRET BAIER, HOST: Podcast with David Plouffe. Former secretary of state, former candidate for the Democrats saying that Tulsi Gabbard, a current candidate, is a Russian asset. Tulsi Gabbard firing back on Twitter. She may fire back live here on our show. "Great! Thank you, Hillary Clinton. You, the queen of warmongers, embodiment of corruption, a personification of the rot that has sickened the Democratic Party for so long, have finally come out from behind the curtain. From the day I announced my candidacy there has been a concerted campaign to destroy my reputation. We wondered who was behind it and why. Now we know. It was always you through your proxies and powerful allies in the corporate media and war machine, afraid of the threat I pose. It's now clear that this primary is between you and me. Don't cowardly hide behind your proxies. Join the race directly."

We will start directly there with this late-breaking news. Let's bring in our panel, "Washington Post" columnist Marc Thiessen, Johanna Maska, former aide to President Barack Obama, and Mollie Hemingway, senior editor at "The Federalist." Marc, this was a shock. We were planning to lead with something else, and then suddenly it just came.

MARC THIESSEN, AMERICAN ENTERPRISE INSTITUTE: My question is, how does she know? Did she find out from Fusion GPS? Did Christopher Steele give her a secret dossier on Tulsi Gabbard? Look, Tulsi Gabbard now understands how Donald Trump feels. He was called a Russian asset. He was called a Russian agent. And it wasn't true. So welcome to the party, Tulsi.

BAIER: If Democrats were trying to somehow squelch Tulsi Gabbard's effort in the primary, this wouldn't seem to be the way to do it?

JOHANNA MASKA, FORMER PRESIDENT OBAMA AIDE: No, and I don't think it's responsible to call a member of our military, a veteran, a Russian asset. So I don't think that's a helpful comment. And I think you're going to see a lot of Democrats come out and say same. I'm kind of surprised that she made the comment and that it made the podcast. But there it is.

BAIER: You would have edited that out if you were David Plouffe?

MASKA: I don't think he needs the attention. So, yes.

BAIER: It was quite something.

MOLLIE HEMINGWAY, SENIOR EDITOR, "THE FEDERALIST": She is currently enlisted in our military, and she enlisted after 9/11. This is a woman who is being called a Russian asset by Hillary Clinton because she has foreign policy views that differ from hers. And it is very reminiscent of what happened with President Trump.

But it's also what happens when you don't hold people accountable for perpetrating the Russia hoax. That was something that was invented by the Hillary Clinton campaign with the Democratic National Committee. They secretly funneled money to create that operation. It got disseminated through the media. It was weaponized by the government. No one has been held accountable for it. And in fact, she is still out there repeating these same conspiracy theories with different targets.

BAIER: The theory is that Jill Stein, the Green candidate, was also paid by the Russians to get in there and take votes from Hillary Clinton. She is now saying I would like to have a debate with Hillary Clinton. I didn't get that the first time in 2016.

THIESSEN: She still is coming up with reasons why she didn't win.

But it also shows how unserious they are about the Russia threat. It's all a political game for them. After the Mueller report came out, if they really cared about the threat from Russia, they would have said OK, Donald Trump didn't collude with the Russians, but this is a real threat. Let's do something together, Republicans and Democrats, to protect our democracy. And instead they dropped it because, well, if it's not going to help impeach Donald Trump they are not interested.

But on what Mollie said is, John Durham is doing his investigation. We still may get some responsibility, people held to account for what happened.

BAIER: We should point out that Congresswoman Gabbard said originally, or her team said 6:30. So she is running a little bit late. If it does come on, we'll show it to you here on FOX.

Meantime, Johanna, there is still fallout from the White House chief of staff and how it is being interpreted what he said yesterday. Take a listen.

REP. DAN KILDEE, D-MICH.: Mick had a moment of truth, and then realized that that was not going to be good for the president and had to walk it back.

REP. FRANCIS ROONEY, R-FLA.: Whatever might have been gray and unclear before is certainly quite clear right now that the actions were related to getting Ukraine to do some of these things.

TRUMP: I think he clarified it.

BAIER: Kind of clarifying what he said, and then he put out a statement yesterday afternoon trying to do the same thing.

MASKA: Yes, there is a lot of clarification. If I was under an impeachment inquiry, I would have message control. But President Trump has proven with his proactive communications that he is always keeping himself in the offensive position. Yesterday, he made Mick Mulvaney go out and do that. I don't think that was a coincidence. He said you need to go out here and deliver this really bad news that everyone is going to take poorly.

BAIER: Not only that but also say that G7 is going to be at my place in Doral.

MASKA: And that's the whole thing. And even the fact that he was using there, I was at the Camp David G8. I helped to plan it. And I remember the positive feedback we got from world leaders who got that intimate feeling at Camp David, which is an extraordinary site. So to throw that under the bus and say that it wasn't a good summit, when literally the U.K. duplicated that summit with Lough Erne the next year, it was just factually inaccurate. I knew he was thrown out there without much information, but it seems like he was put up for a very long time and said things he probably regrets.

BAIER: We are going to do winners and losers, but your thoughts on this day, the fallout from that, but also we learned that George Kent who testified on the Hill said that they warned about Hunter Biden and this Ukraine company in 2015.

HEMINGWAY: Yes, so you are seeing a lot of this with the testimony that's being provided. It's not matching up with what Democrats are hoping for. Each finding out that people care about when we give $400 million in taxpayer aide, we want it to go to a country that doesn't have corruption problems is not a high crime and misdemeanor. Learning that there was a whistleblower about Hunter Biden and that a member of the Biden staff pushed back on that is not what the Democrats are hoping for when they are trying to go after Trump.

BAIER: I don't have a lot of time, so we're going to stay positive. Very quickly, we are only going to do winners. Let's go, winners down the row.

THIESSEN: My loser is you, and me, and all of us who had to watch the Democratic debate instead of watching the Nationals win the pennant.

THIESSEN: My winner is Charles, because Charles Krauthammer would have loved this moment.

BAIER: There you go.

MASKA: I am so happy. I only wanted to do a winner. So that's so lovely. It's the Carters. The Carters have now been married for 26,766 days, making the longest marriage of a presidential couple, just overtaking George H.W. Bush and Barbara Bush. And I have to say, so many congratulations because I love a happy marriage.

HEMINGWAY: My winner is you for your new book that is coming out, "Three Days at the Brink."

BAIER: She is going to be back on the panel so often.

THIESSEN: I shouldn't have made you my loser.

When we come back, "Notable Quotables."

MIKE PENCE, VICE PRESIDENT: Today, the United States and Turkey have agreed to a ceasefire in Syria.

TRUMP: I want to bring our soldiers back home.

UNIDENTIFIED MALE: Elijah was just a wonderful man, a smart, gifted, and I don't think we will see his likeness again.

REP. TULSI GABBARD, D-HI: "The New York Times" and CNN have also smeared veterans like myself for calling for an end to this regime change war.

TRUMP: Almost as deceptive as you showing all of the bombings taking place in Syria and it turned out that the bombing that you showed on television took place in Kentucky.

UNIDENTIFIED MALE: He has a right to protect, and that's what the whistleblower statute says it. It doesn't say anonymity.

MICK MULVANEY, INCOMING ACTING WHITE HOUSE CHIEF OF STAFF: Doral was by far and away, far and away the best physical facility for this meeting.

UNIDENTIFIED MALE: If they looked at four Chuck E. Cheeses in Cincinnati and the top of Mount McKinley and my basement, and Doral, Doral was the perfect choice.

MULVANEY: Get over it.

HUNTER BIDEN, JOE BIDEN'S SON: Some kind of Alice in Wonderland where you're up on the real world and then you fall down the rabbit hole, and the president is the Cheshire Cat.

UNIDENTIFIED MALE: So I guess I'm the Meryl Streep of generals.

TRUMP: Do you think I could take him in a fight? I don't know.

How do mine look?

Thanks for inviting us into your home tonight. That is it for this “Special Report.” This weekend you want to watch "FOX News Sunday" for an interview with Acting White House Chief of Staff Mick Mulvaney. Chris Wallace will have some pointed questions, I'm sure. Check your local listings for that air time.

That's it for this show, fair, balanced, and unafraid. Still waiting for word of that Tulsi Gabbard press conference from Iowa. Expect it to happen tonight. We'll see if it does. Might happen with Martha. Her show is next.