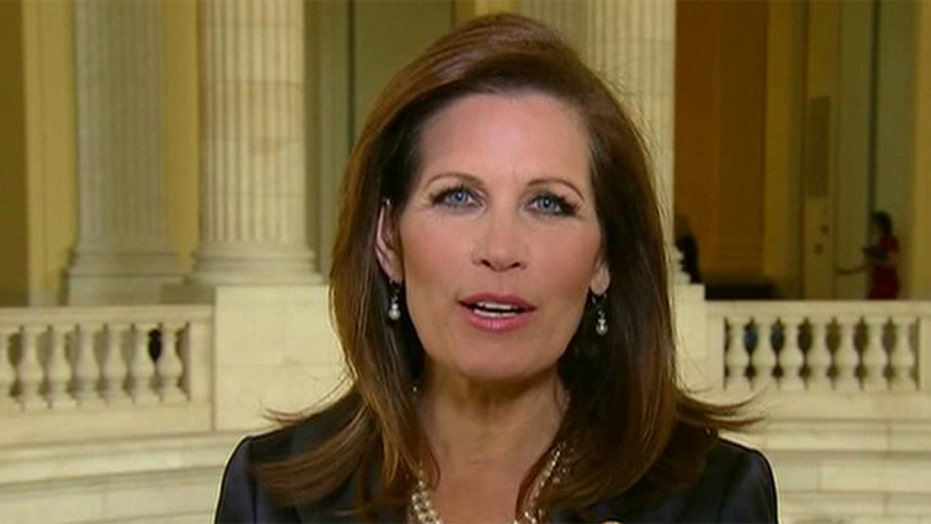 Sounding the alarm on bias against conservative

MICHELE BACHMANN: Already the IRS was the most feared federal agency there is, and now they've only made their lives worse, because they understand that the American people catching on. They have to enforce Obamacare for all Americans. No one will escape this boney, death-like grip of the IRS. People should rightly be worried. I'm the author of the bill to repeal Obamacare. That's a very important bill. It got through the House of Representatives. I'm also the chair of the Tea Party caucus. It wasn't just the Tea Party that was targeted by the Obama administration through the IRS; it was also Christians and those who support Israel, people who are pro-growth, pro jobs, anti-debt, people who are conservatives, people who are Tea Partiers.

This was an instance where we saw political opponents of this administration who are punished for their political or religious beliefs, whereas the allies of this administration were given rewards; they were fast-tracked for their tax status. So of course we should be worried, because now a new national database is about to be created that will hold our most sensitive, personal, intimate information-- our health care-- and now the IRS will be the enforcer of health care, so now it is reasonable to ask.

JONATHAN HOENIG: (We should all be concerned about this) Not just because of our privacy, Eric, but really because of our political freedom. Facebook protects our privacy, but in this cade government is destroying it terribly. Whether it's the IRS harassing Tea Party groups, or the AP reporter surveillance scandal, this is government essentially stamping out people's ability to freely express themselves. When you have to worry about who's looking in your Facebook account after you're expressing a political perspective, that is tyranny, in my opinion. There is no difference than what Hugo Chavez, or Castro, or any other tyrannical government has done. It is happening right here in our own society. It's terrible for the economy, and terrible for the republic.

WAYNE ROGERS: It's out of control, Eric. Eric Holder- this is the guy who authorized Fast and Furious, where one of our own drug agents was murdered by a gun that he authorized to be sold. This guy is nuts. He should resign. Maybe Boehner is right, he should be put in jail. And the idea that they are using the word "inappropriate"-"This was inappropriate behavior" instead of saying it's "illegal behavior". It's against the constitution. Even the ACLU said this is in violation of the First Amendment. This guy is pretending like he's not there, just like the president is saying they're not responsible. Well if they're not responsible, who the heck is running the government?

JEHMU GREENE: Well, Eric, what's terrible for the economy would be a terrorist attack. And so specifically with the AP piece, if the AP compromised an active counter-terror operation that helped the terrorists, that's something that needs to be investigated. The government's first job is to keep us safe.

TRACY BYRNES: If you're going to ask the AP for their records, why not ask them? Why not tell the American people that you're doing this. Why is it so secretive all the time. Look, Eric, look where we're going with this. While all of this is going on, this IRS has this big push to have everybody's taxes electronically filed. So you've got more information out there that they want. They want all of your medical records electronically submitted, too. So all this information is out there. So while the world is changing and advancing technologically, they are secretly taking advantage of us.

EPA TARGETING CONSERVATIVE GROUPS? IF TRUE, CAN THIS LEAD TO HIGHER ENERGY PRICES?

TRACY BYRNES: Everyone is so sick of the favoritism at this point, Eric. You've got conservative groups that can't fight back; they can't challenge this green agenda. The green agenda inevitably is going to cost us more money, and who do you think is paying for it? Certainly not the companies that have to enforce the rules. It is you and I. You watch the energy prices go up if this happens.

JONATHAN HOENIG: This is life on Obama's animal farm. All the animals are equal, but some like the greens are more equal than the rest. Tracy hits the nail on the head. This is making it more different for groups who oppose the EPA's agenda and the green agenda, and making it very easy and very cheap for those who support the green agenda. It's basically targeting people specifically for their political beliefs. It is an attack on political freedom. It's terribly destructive and expensive for the economy, and it's government using force against its own people.

JEHMU GREENE: If this happened-and I say if because we do have this report coming from an organization that's clearly biased against the EPA, but if this happened I think the president is going to have more heads roll in the same way that we've seen him come down hard on the IRS, and the same thing with the EPA. He has said it's intolerable, it's inexcusable. Public service is a solemn privilege and he will uphold that.

WAYNE ROGERS: Jehmu, with all due respect, it's a fact the competitive enterprise institute in 93% of the cases was turned down when in fact 90% of the time when it was green, their fees were waived. That's a fact. They are deliberately prejudiced against people who are not green, and prejudice for people who are green. That's not the role of the government. That is the role of a totalitarian king or dictator. We've got to stop this.