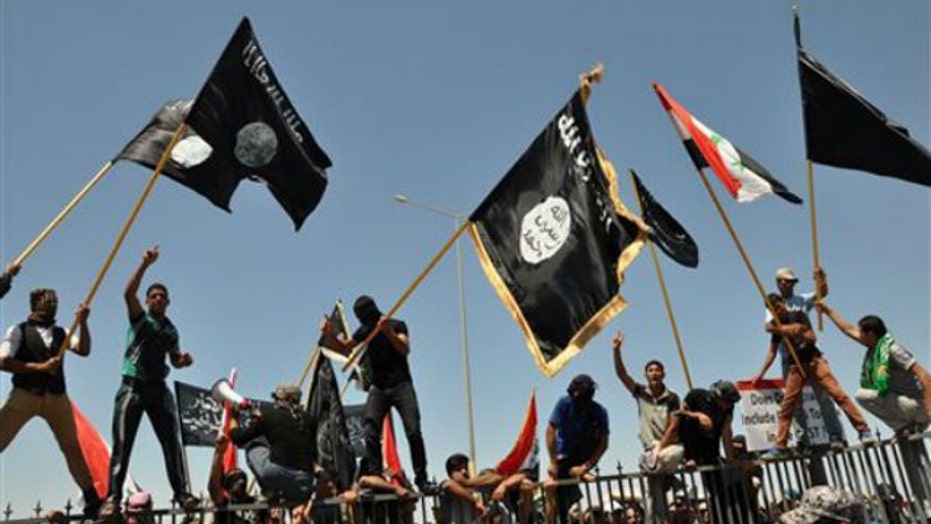 Gerri Willis: I think they should get in front of Congress to do something stupid and pass a bill to force them to do something, what they should help on their own. Patriotism. They should track these things down not just kill the accounts, but share the information with the federal authorities. That's their responsibility.

Scott Martin: Right, because that's the cool stuff. These social media platforms of YouTube, Facebook, Twitter, which all the kids are going to, is how they're finding their influences. That's the tough thing too, as a social media company you may not be happy with the government's spot in your life, but you have a responsibility to help the inept, and that is the government. I mean look at their projects of healthcare.gov alone, they need the help of the social media companies to help get those guys off of social media to help get it out of the teenagers' and young adults' faces.

Adam Lashinsky: Well you raised it yourself Charles, there are First Amendment issues. It's an interesting situation. These companies don't typically own the intellectual property. For instance FOX or a newspaper, takes responsibility for everything that happens on its platforms, in its newspaper. Twitter and Facebook, LinkedIn, don't. It belongs to the people who post it. I think they should help governments, but government needs to check all the right boxes and make sure they really believe. We take the Constitution very seriously, especially on the country's birthday.

Charlie Gasparino: Do you advocate for FOX to take an active role in helping the government address terrorism? That's what we're getting here. I know the notion of who owns the tweet, or who owns the post, but should FOX or CBS actively, hand-in-hand with government, address terrorism? It's not our job. It's one thing for Twitter and Facebook to know that it is an active terrorist account, that account should be shutdown. That's illegal behavior. It's another thing for any news conduit, it's either us or them, to actively engage, hand-in-hand with government.

SIX STATES HIKE GAS TAXES AHEAD OF HOLIDAY WEEKEND; GAS HIKES GOING WHERE THEY'RE SUPPOSED TO?

Charlie Gasparino: I covered municipal governments for many years and New York is the most wasteful city in the world when it comes to infrastructure spending, but generally the money gets stuck in slush funds that don't get used for roads and bridges. That's why you keep hearing that there's a perpetual crisis of infrastructure. The only good part of that is that it's the states raising money. So the voters can see that and demand more transparency and hold their elected officials accountable if that money is wasted.

Gerri Willis: They spend $50 billion a year; they get $34 billion a year in the highway trust fund. They are overspending, they are not doing what they're saying, and here's where the money is going: It's going to mass transit; it's going to landscaping, flowers in the median believe it or not. It's going towards bike paths. It's being misused, sometimes on the scale that Charlie is talking about.

Scott Martin: It is and thank you for the flowers last weekend Charles I loved them. These taxes, up until the tax increase in 1993, was actually used towards deficit reduction of all things, so not fixing up roads and bridges that are now in big trouble. Here's the other issue, but because of fuel efficient vehicles and teenagers aren't getting their licenses as often as they used to be, and seniors are driving more, but not as many miles, and population growth factored in too. Guess what? We're not driving as much per capita and therefore the taxes are going down.

Lisa Boothe: Well look Americans are already paying enough. They're spending 50 cents per gallon between federal and state taxes. In my opinion, that's already too much. The real problem here is too much federal spending because if you look at this issue at the federal level, the reason why the highway trust fund has become depleted is that Congress has raided it for their pet projects. So that's the real problem here, that we are spending more than we are taking in.

Adam Lashinsky: First of all I disagree, as you know I always do, that it's other people's money. It's our money, and I do agree the gas taxes should be spent on roads, although I think the flowers in the median is a nice thing as well and we all know that gas taxes in the U.S. are far too low and lower than the rest of the world; gas is too cheap in the United States.

Adam Lashinsky: Gerri made an interesting point that I didn't think of before when she mentioned the VA, I think you may be on to something Gerri which is Americans aren't very good at socialized medicine, at least not for us. That said, Greece is not the only country with a single payer system. There are lots of them, including the U.K., where it works well and the economy is strong. My only point here is that there is more than one way of doing things.

Lisa Boothe: Right and that's socialism. A wise woman once said the problem with socialism is that you eventually run out of other people's money. Look, 2/3rds of all federal spending in 2014 went to entitlement programs. We can't afford ObamaCare, and we certainly can't afford a single-payer system.

Gerri Willis: I got to tell you. You want to have universal healthcare? OK, let's take the VA as our model. How well has that worked? Not at all. When it comes to bending the cost curve, as the president originally promised, that your healthcare under ObamaCare would cost the same as a call phone service, right? Not so much, unless it was gold plated. It's not working.

Scott Martin: It's a funny thing that Bernie Sanders hails from Vermont, which is a state that rejected the socialized medicine idea recently. It's pretty interesting that he's pushing this. Now if you're all for commoditized medicine, like I like to call it, where you're pretty much going to be going to Walmart to say get your leg casted, then yeah I'm all for it. But I tell you what, if you want to lose access to your doctor again, if you want to possibly lose access to your plan again, have this Gerometicare fund for everybody, we can all compete for the same doctor, the same services. It's not my opinion I want it.

Charlie Gasparino: I think what's fascinating about it is the political aspect. Bernie Sanders knows he's probably not going to be president, and what he's trying to do is hinge Hillary Clinton to the left of this. Now a lot of people thought Obama's plan is really mandated insurance and not quite socialized medicine. That that was just a step towards a single payer system because he knew he couldn't get that right up front and the Democratic Party, if it does win, and it has to get both houses of Congress, may go for that single payer and push Hillary Clinton further to the left on this.