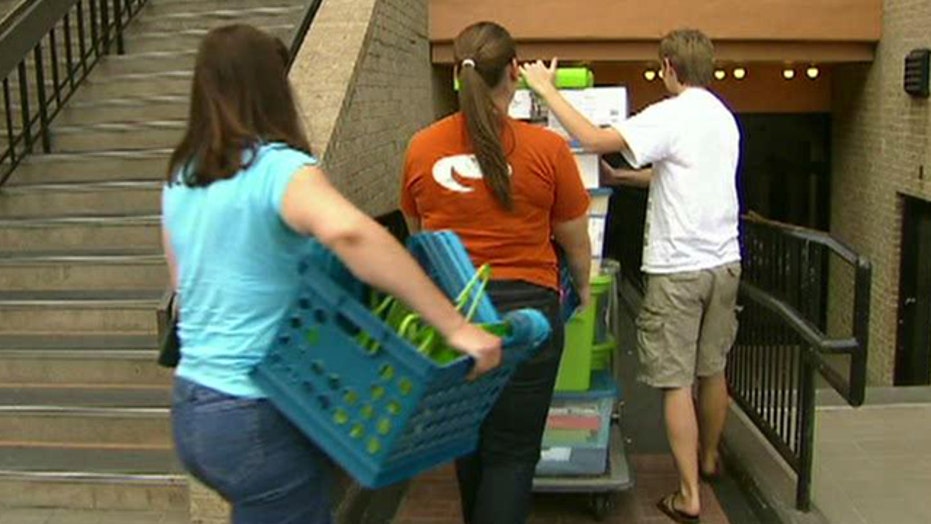 College enrollment drops for the first time since 2006

JOHN LAYFIELD: It's going to hurt jobs. A lot of people thought this jobs report was good, but many of them are forgetting how many jobs were lost. It is the lowest labor participation rate since August of 1978. The biggest problem is that most of the jobs lost were between 16-24 year olds. No one is going to hire these kids because of premiums and ObamaCare kicking in.

JONAS MAX FERRIS: ObamaCare will raise costs for employers, but it will also increase demand. People are going to go see their doctors more, it will increase the need for medical equipment. Yes, it will raise costs to your employer, but the money is going to get spent somewhere in the economy.

GARY B. SMITH: Only 17 states even have these exchanges. A lot of people pay premiums themselves. They aren't going to go see doctors more and they aren't going to use more health care. At the end of the year, they're going to see less money in their paycheck. Essentially, it's a tax. All the studies have shown that there is a correlation between higher taxes and higher unemployment. I think these numbers are low balling it. I think they're going to go up more than double. We're going to see even worse unemployment numbers.

SASCHA BURNS: You can always find a metric that goes along with what you believe. I don't think this will have a bad effect on jobs. Once the President delayed the implementation, the jobs got worse. There is no relation to each other.

TRACY BYRNES: All of the new jobs added were part-time. I know Jonas hopes we live in a utopian world one day of all part-time workers, but part-time people don't have money to spend in this economy. If these premiums keep going up, employers are going to continue to hire part-time. Half the country barely gets a W-2, who is paying these taxes? This is not going to work in the end.

STOCKS RISE THIS WEEK IN FACE OF POSSIBLE STRIKE ON SYRIA

GARY B. SMITH: I think Wall Street is seriously hoping that there is no attack on Syria. I know that when Kerry said, "We have proof," the markets plummeted. If we strike Syria, I bet the market drops in a matter of days. I'm fingers crossed that nothing happens.

JOHN LAYFIELD: Every time we have a conflict looming, the stock market goes down and oil prices go up. Once we do or don't strike Syria, the markets will probably stabilize. Right now the market is seeing our President probably being talked out of going into Syria, if that happens it will be the best case scenario for the markets.

SASCHA BURNS: If the Syria vote goes down in Congress, we'll get back to the discussion of the budget and debt ceiling. The President is not going to concede another defeat to the Republicans in the same month. That could create a problem. It would be kicked down to the end of the year with a continuing resolution, which creates uncertainty in the markets that they don't like.

TRACY BYRNES: I think we are seeing a bunch of short term blimps. I think the market could give a damn about anything except that next Fed meeting. I think that's all they're looking at; what will they decide to do, how much will they decide to cut back? That is really and truly what they care about at the end of the day.

JONAS MAX FERRIS: The market wants to give peace a chance, it doesn't like war. Yes it will come back. It has come back from wars 100 times worse than anything that could happen in Syria. Wars are only good for defense stocks. It's a waste to the economy to go to war.

GARY B. SMITH: It's the law of unintended consequences. I'm sure the intentions were good, but when you throw a lot of money at a product, the prices go up. The price of tuition has risen. Students have taken on these loans and they can't pay them back. Many of these students can't get jobs in this economy.

TRACY BYRNES: Middle income people are getting really squeezed on this because they can't afford all the loans. Many are opting to do other things; like go to a trade school, a state school, or a two year school. That is what is hurting this.

JONAS MAX FERRIS: This recent phenomenon is more that people that are twenty-five and older aren't going back to college. It could be a sign that people are thinking the job prospects are good enough to where they don't need to go back. I think this might be a good sign that the job market is improving.

SASCHA BURNS: There are very rare cases in which you can make it without college. In this kind of global market, we can't have an uneducated workforce. We can not continue to lag behind the rest of the world in this field.

GARY B. SMITH: Still the "happiest place on Earth" (DIS) rides up 10 percent by January