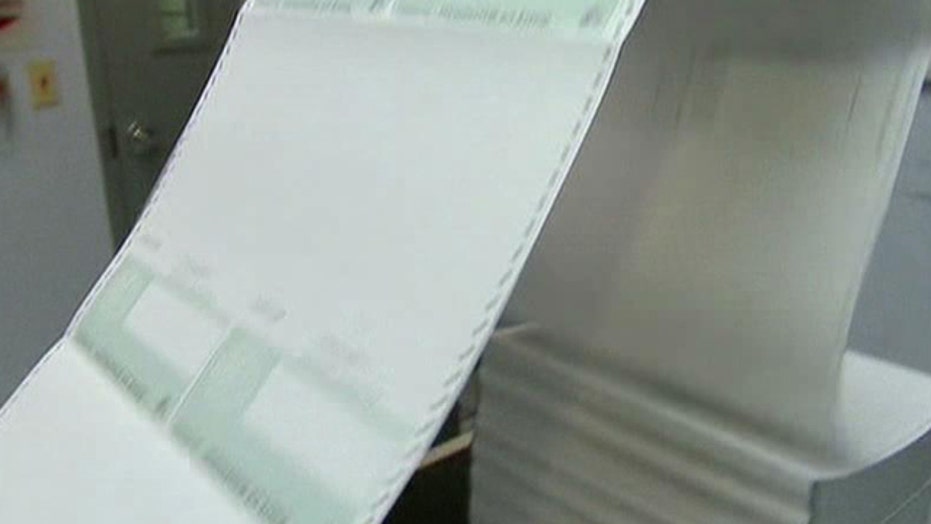 GOLF PRO PHIL MICKELSON "TEEING OFF" ON TAXES: TIME FOR DC TO LISTEN UP AND DO "BACKSPIN" ON TAX HIKES?

TRACY BYRNES: Enough is enough, Eric. My God, did you see your paycheck? At least I barely saw mine paycheck. I needed a magnifying glass. I'm glad Phil Mickelson spoke out on behalf of all of us. The problem though is, guys like Phil can leave. He can afford to pick up and go live at another one of his homes if his state taxes are too high; I can't. I can't sell my house, I can't move my kids out of school, and unless we move this New York City studio, or allow me to Skype from home, I got to live near my job. I don't have that luxury.

JONATHAN HOENIG: We are indeed. And you get to some states like New York, like California, Eric, you're talking about more than 60 percent of your earnings. So it's no wonder that people, whether it be individuals or businesses, are leaving these states in droves. High taxes- I mean taxes are forced-so of course high taxes always prompt an exodus, whether it was Tiger Woods, Eduardo Saverin from Facebook, or even going back to the UK in the 70s, the Rolling Stones. I mean, if you work and you don't get to keep the product of your labor, what are you? You are a slave. And I'll tell you, California is more than 60 percent of the way there.

WAYNE ROGERS: Well, it's not a question of them getting the message. It is a question of spending. You have to cut spending in order to do this. You can't just meet this with taxes. That's going on on a national level, not just in California. California has got a bigger problem because it has been so flush for so long and done so well for so long and done so well for so long. We've got five cities, for example, in the state of California that are filing for bankruptcy; you've got to worry about the bonds there. You've got all kinds of things, but the biggest, main problem here is this is a tax, the state income tax, just like the federal income tax, is a tax on production; it's a tax on productivity, as opposed to a consumption tax. For example, in the state of Nebraska, Governor Heineman is substituting his sales tax for a income tax, and he makes himself more competitive by doing so.

DENNIS KUCINICH: We have both a tax and a spending problem. There is no question that the government wastes a lot of money, and people have every right to be upset every time they hear about a tax increase. We need to look at our monetary policy, because frankly that's driving our tax system, as well. People right now should know that the government spent hundreds of billions wasted on war.

SANDRA SMITH: That's the biggest problem people have, and they see it at the state level, as well, like in the state of California, where you've got two percent of the top earners paying nearly half of the state's taxes. By the way, half of the state of California is paying no taxes at all. And sometimes they're the ones that are griping about the raise in taxes the most. Here's the problem: Governor Jerry Brown is cheering on mediocrity, he's discouraging success in this state. And when you chase guys like Phil Mickleson-who shouldn't be regretting his statements-when you chase those top earners out of the state, they are no longer buying cars, buying boats, buying big houses. So the cost of raising taxes is just a killer on this state that's bankrupt.

SANDRA SMITH: It's just a waste of money, and the government's put itself in the position of picking winners and losers in the green energy space. Always somebody who's benefitting on one of their buddies. We saw this in the case of Solyndra. $570 million in taxpayer money went towards bets on Solyndra, and even when the government got in deep and saw that this company was failing, they poured more money into it, and we're still paying for it. We need to get out of this and leave it up to the private companies to make these bets. Let the free market work itself out. If there is money to be made in green energy, it will happen.

TRACY BYRNES: That's the thing. We haven't seen a whole lot of it coming out of the private sector, have we? So maybe there's not so much to it. So what the heck is the government doing? There is nothing to substantiate it, really, other than a bunch of scientists saying that the world is blowing over or whatever-it's not enough. We need the money. $14 trillion-hello-16 trillion debt. Is anybody paying attention, again, to the debt?

DENNIS KUCINICH: 97 percent of the world's scientists seem to think that we have a problem with global warming and the idea of investment we should look at, here. The show is "Cashin' In," right? People will "cash in" in the next generation if we invest in a public private partnership in geo-engineering, in other things, in transiting to a new energy economy which does not damage the globe. I mean, look at hurricane Sandy. $50 billion and more in damages. We're going to keep having storms like that; impacts insurance companies, Wall Street. We have to get with the new economy.

JONATHAN HOENIG: If green energy worked, it wouldn't need a subsidy. It wouldn't need- I mean congressman, you talk about 90 billion under President Obama, that to Sandra's point has literally been flushed down the drain. And again, you are picking winners and losers in what should be a free market competition for what the best energy is. It just so happens, that the best energy, the ones that actually work-carbon, nuclear, hydrocarbon-all the ones that the green lobby, of which Congressman Kucinich I think is a proud member, they oppose, they vote against. It is really an anti-man position. We use fossil fuels to better our lives. What give us the food, the medicine, the transportation and makes the modern world possible. To be against that is to be against man's well being on earth.

WAYNE ROGERS: Apparently not. If you look down the list, everybody picks out Solyndra, but there's about 20 others that have just gone upside down and in the toilet, and it's a waste of taxpayer money. I mean it's an outrageous thing that goes on. The basic, fundamental flaw is somehow the people in the federal government know more than we do. They know more than everybody else. They can control it, and they can pick the winners. That's a huge, enormous lie. It has been perpetuated on the American people, and it happens and occurs more and more and more. We in the federal government know more than you, and therefore we can coerce you to put up your money into our choices.

INVESTORS, THE MEDIA CELEBRATING "MEDIOCRITY" IN THE JOB MARKET: IS MEDIOCRITY THE NEW ACCEPTED NORM?

WAYNE ROGERS: Eric, there are so many people now who are dependent on the federal government to get money and they've gotten used to it, so we've extended unemployment insurance. There is a more fundamental problem going on and that is educational. In the sense that the guy who used to be, for example, a lathe operator, has now been replaced by a numerically controlled machine; and the guy who operates that is a guy with computer knowledge. We are not educating our work force to a substantial level to support the kind of technological economy that we are going through.

JONATHAN HOENIG: I am glad to see the market up, Eric. But president Obama's recovery Has been the worst in modern history; worse than Reagan, Nixon, Ford, even FDR. I think, to Wayne's point, all of the entitlements that we've built up-- that intervention prolongs the crisis, it worsens the crisis. In fact, a lot of these countries that have systemic unemployment, like France-- France never had unemployment below 10 percent since the 1980s. So yes, the bigger government grows, the bigger mediocrity grows, because essentially it swaps man's mind, which creates wealth, for a gun.

DENNIS KUCINICH: Look, I agree with you. There is no recovery that we can measure here, when you can point to how many people are out of work, how many people lost their homes, how many people are on food stamps. We need to change our policies and invest. Invest, invest, invest, and then you cash in. Right? Isn't that the way it works? We need to invest in America first; rebuild out infrastructure. China is doing it. China's unemployment is 4.1 percent; ours is almost double that. China is investing with what? With the money they get from us; the interest rates to pay for the money we borrow for war, and also for the trade deficit.

SANDRA SMITH: Tracey is exactly right. But if we get the government out of the way, you could see a temporarily sell off in the stock market, because right now the stock market- Dow is a couple of points shy from all-time highs because the market knows that the more mediocre the economic numbers that come out are, the more we know the government's going to step in and assist in the form of low interest rates, food stamps, unemployment checks- and the market cheers it on.

TRACY BYRNES: Kate Upton -- going to be in the Super Bowl. Why? Mercedes confident, they're spending money and they brought in a model.

SANDRA SMITH: If you're thinking about having a Super Bowl party, think again guys. The price of chicken wings, one of the most commonly eaten items at a Super Bowl party, has skyrocketed in price. They're up 26 percent from the same time last year. Think about heading over to a friend's house for the big game.

WAYNE ROGERS: Well, I'd like to get some of those chicken wings. I'm unwilling to put new money at risk in this market, with the S&P approaching 1,500, it's a little scary out there right now.

JONATHAN HOENIG: I know it's sacrilege to say this in these circles, Eric, but I think you should actually short gold. There, I said it. I know it's a shanda, but the dollar is strengthening -- you've got the Yen, the Aussie dollar all week, and a lot of the gold stocks --