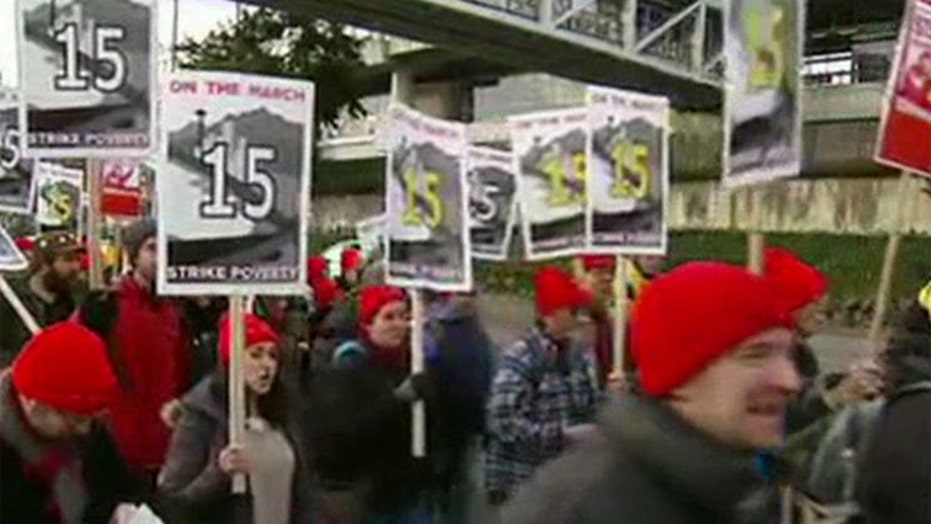 Should US scrap the minimum wage altogether?

JOHN LAYFIELD: No, we can't. We got to shut this down at some point. They don't want to cut spending or entitlements. We are doubling our debt every eight years and there is no entitlement reform in place. Look, if rates go back up to 5, 6 percent, we are in significant trouble. We have got to rein this in at some point.

CHUCK ROCHA: We've had a problem all along. The Congress is writing checks and we have no money in the bank. I'll be if I will let them bankrupt the American worker on this back end. We need to make sure everybody pays their fair share. We also should keep our debt in mind.

GARY B. SMITH: The big programs that they have like social security, Medicare, and Medicaid are filled with fraud and over budget. Then you have other things where they waste money like Amtrak, which loses money every day. They can't even make money with a virtual monopoly in the U.S. Postal Service. Big projects by the government are inherently loaded with pork and bloat. They just don't work. We will be spending $8 billion a year on interest payments alone. This madness has to stop.

TRACY BYRNES: Nothing is working that they've done. So why not let corporate America finally take the reins, and do this on their own. Stay the hell out of business.

JONAS MAX FERRIS: The deficit is a lot lower than it was a few years ago. All those plans got scrapped. We were going to do this thing when they changed the social security formula, a big hole for government. They were going to raise more taxes; that kind of deal making seems to be gone now. Now it's the old "I'll spend on the green initiatives, you get a defense spending budget." That leads to more spending which we can't afford. I think we can solve these problems in a revenue neutral way. You can't spend money on credits here and more defense spending to get other people to vote for it. That's the old way government works. That's how you get the deficits.

PRESIDENT OBAMA: MY PLAN WILL SAVE FAMILIES $2,500 ON THEIR PREMIUMS

TRACY BYRNES: Corporations are not going to suck up the difference if their expenses are going up. They're going to pass them right on so family can expect premiums to go up $260 a year. Individuals expect about a $160 bump in your premiums as well. This is how corporate America works unfortunately. It is going to be passed onto the consumer. Hold on to your cash while you can.

CHUCK ROCHA: I think it's good a lot more people are signing up for health care. I think this law being enacted is a good thing. I think you will see lots and lots of people feeling the way I do.

GARY B. SMITH: I think what will happen is there is going to be an insurance company bailout. You know who will pay for that? Us through taxes. Here's the problem: the IRS has no way to collect those taxes. There is nowhere in the provision for the IRS to garnish wages or any of this other stuff. It will fall apart. It will be a mess. Maybe the right's best way is to let it sail down and implode on its own.

JONAS MAX FERRIS: I will say the above average consumer of health care, whether you are older or near Medicare age or not quite there or are you a frequent flyer in the health care industry as they call you, you are not going to see the cost of this. The below average consumer of health care, whether fit, healthy, eat right, young, that person is going to be paying for the other person's increased health care coverage because it is mandating in its simplicity more health coverage and better health coverage with no caps. Somebody has to pick up that tab. It's basically capital communism in a way.

JOHN LAYFIELD: I think it will get significantly worse. Only time will tell 20 years out if this is a good law or not. Right now it looks like it will get much worse. These are very conservative estimates. We are all going to be billionaires in about two years. Like Mike Tyson says, "Everybody has a plan until you get punched in the mouth." These guys planned on a rosy scenario that everybody is going to sign up and it's all going to be free. That's not going to happen. We will see fewer doctors and higher premiums. This will be paid for through taxes.

CHUCK ROCHA: The problem with this CBO, it might be a half a million, it might be a million. The facts are it would lift 900,000 out of profit. I realize that isn't how corporate America works. You should be able to pay them what you want to pay them. That's the facts. It would be good for America.

JOHN LAYFIELD: I'm not for dropping the minimum wage. I'm for linking it to inflation and a basket of wages. It goes up or down according to what the market should bear. Take it out of politics and union's hands.

JONAS MAX FERRIS: This CBO thing is a guesstimate. It could put people out of work, but we almost have to do it to see what happens. They can't capture this in a CBO report. When you look at the revolutions of history, Russia and France, it's because they didn't have labor laws. All the countries with royal families have minimum wage. Get people minimum wage to make them feel like they're in the game.

TRACY BYRNES: We have been saying all along that raising the minimum wage hurts jobs. It doesn't create them. I get the notion that everyone needs a starting point, but that is what it is. It is a starting point. You should not aspire to go to the grave making minimum wage and so we really need to get people to think big picture around here. Forget the minimum wage. Let's get you in the door. I want my kids to want to be the next Steve Jobs, not the guy that makes minimum wage until death do us part.

TRACY BYRNES: Get ready to pay up if your kid gets caught playing hooky