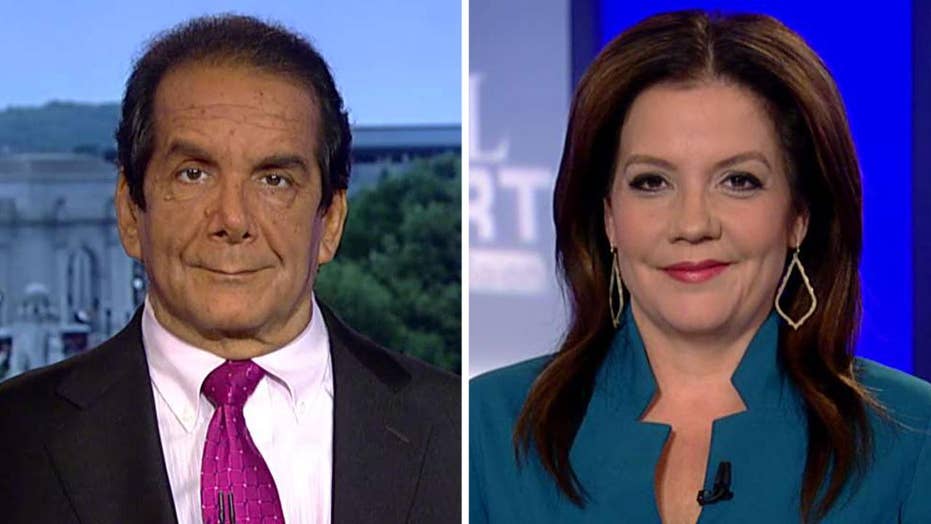 Should US legal immigration use a merit-based system?

This is a rush transcript from "Special Report with Bret Baier," August 2, 2017. This copy may not be in its final form and may be updated.

PRESIDENT DONALD TRUMP: This legislation will not only restore our competitive edge in the 21st century but it will restore the sacred bonds of trust between America and its citizens. This legislation demonstrates our compassion for struggling American families who deserve an immigration system that puts their needs first and that puts America first.

SEN. TOM COTTON, R-ARK.: If we can succeed on this kind of commonsense incremental reform to immigration it might give the American people more confidence to tackle some of those more challenging issues.

BRET BAIER, ANCHOR: Change to immigration, basically the green cards that go out putting high skilled, ultra high skilled workers at the front of the line for legal immigration, a change that the president's advisor on this telling reporters will be welcomed and pushed from the outside in.

MILLER: As far as a real push for change, that begins in earnest aggressively starting today. And I do think, I just work on the policy side, but I do think voters across the country are going to demand these kinds of changes because, again, the effects it has on their lives and their communities. And this is overwhelmingly popular.

BAIER: If you look at the latest poll out today by Quinnipiac about the president's handling of immigration, upside down in this particular poll. Will this turn all of that around? Let's bring in the panel: Michael Crowley, senior foreign affairs correspondent for Politico; Mollie Hemingway, senior editor at The Federalist, and syndicated columnist Charles Krauthammer. Mollie?

MOLLIE HEMINGWAY, THE FEDERALIST: Having a targeted, skilled, coherent immigration policy should not be controversial. This change that deals with merit-based allocation of the spots that we give is a wise one. The only thing that's really controversial is decreasing the number of people who are allowed entry into the country.

BAIER: This would do it by about half.

HEMINGWAY: Yes. That's negotiable, though. But there are two main problems with our immigration system, our legal immigration system. And one is that it's not focused on skills enough, and, two, the portion that does focus on skills is really poorly designed. Only 13 percent of people coming into the country have anything to do with an economic case, and only half of those actually are merit-based, 6.5 percent or something like that. So having an immigration system that matches more with what Canada does or Australia does, that's actually just long overdue.

CHARLES KRAUTHAMMER, SYNDICATED COLUMNIST: And it's long overdue. I think if you make the case, it's an easy one to make and it would really prevail. It would take time but you have to make the case.

I love the hypocrisy of the liberals who are so shocked by this, people who swoon over Canada's progressivism with its national health care and its matinee star liberal prime minister who want him to be the leader here. All of a sudden when the U.S. proposes essentially the Canadian system, a merit-based system, are shocked at how mean and racist it is.

This is a no-brainer. Here's the analogy. The United States is the place everybody wants to go, every immigrant. You find somebody on a raft on the South China Sea, where do they want to go? The United States. We have the top 100 draft picks of the NBA, and instead we choose to pick people randomly out of the Karachi phonebook. This does not make sense. We should be doing what Canada and Australia are doing and cashing in on the fact that the world wants to come in. This is so obvious it's almost amazing we haven't done this. And that I think is the core of the issue.

BAIER: You saw Senator Tom Cotton there and also along the president's side there at the White House Georgia Senator David Perdue.

SEN. DAVID PERDUE, R-GA.: There are priorities, health care, tax, a lot of things that we're working on. But we are starting the process. We're going to work with both sides. And right now with the popularity of this system in Canada and Australia we think this should be a bipartisan effort.

MICHAEL CROWLEY, POLITICO: It is going to be a bipartisan effort, and it is going to be tough sell legislatively. There aren't going to be any Democrats on board. You're already seeing some Republicans complain, Lindsey Graham as one example. And you have business groups and economists who are saying this may not be the right solution for the economy.

We can argue about that. I do think it's interesting to see at a time when Donald Trump has had some setbacks. He's had to swallow this bill on Russia sanctions which we may talk about later, and of course we saw the kind of fiasco that health care reform turned into. In the last week or so we've seen the transgender military ban, done by tweet, might not actually happen, possible challenge to college affirmative action policies with "The New York Times" reported overnight, and now this move on legal immigration. I think you're seeing Trump really taking some steps that are going to be really popular with his base, and particularly that part of the coalition that people refer to as populist, nationalist, going back to that idea of Americans who have been left behind, who have gotten a raw deal in the economy. Workers, particularly in the rustbelt in some of those states that he snatched from Hillary Clinton feeling like nobody is looking out for them.

And I think this kind of proposal plays to that audience. And in particular I am struck -- I see this, like Steve Miller, who we saw talking about the legislation, and Steve Bannon, who are really proponents of this vision and the White House, I hear their voices when Trump says in the sound bite that you played, which I think is the critical one, that this legislation will not only restore our competitive edge in the 21st century but will restore the sacred bonds of trust between America and its citizens, really touching on a larger theme of national identity and populist nationalism that I think is going to be very politically good with his base at a time when he really needs them.

BAIER: So in your list, I just want to point out, "The New York Times" story, there is pushback hard by the Justice Department and the White House that this was not anything they are doing on that college thing, but the rest of the list, you're right, they haven't had any big successes legislatively. Can they get one with this? And what Democrats are going to sign on to this effort?

HEMINGWAY: You are absolutely right, Michael, that the problem is that the two groups who are going to be coming out most hard against this will be big businesses and corporations that benefit the most from low skilled importation of low-wage workers, low skilled and low-wage workers, and then also politically on the left. That's the group that benefits the most politically from the current immigration policy.

BAIER: So who fights this, the Chamber of Commerce?

HEMINGWAY: I would assume that many of the corporations will, yes, push all of their Republican members. Having said that, most of what our current system does benefits the elites, it benefits people who are already well-connected. These are the people who suffer the least from our immigration policy whereas the rest of the country where you're actually interacting with some of the problems that come with not having a solid immigration policy, whether it's at hospitals or schools or whatnot, these are the people who have been crying out and been shut down for decades asking for a better immigration policy.

BAIER: Speaking of interaction, I just want to play some of the interaction from the White House briefing room with Stephen Miller, which was interesting.

JIM ACOSTA, CNN: This whole notion of, they have to learn English before they get into the United States, are we just going to bring in people from Great Britain and Australia?

STEPHEN MILLER, WHITE HOUSE SENIOR ADVISER: I am shocked at your statement that you think that only people from Great Britain and Australia would know English. It reveals your cosmopolitan bias to a shocking degree.

ACOSTA: You're trying to engineer the racial and ethnic flow of people into the country.

MILLER: That is one of the most outrageous, insulting, ignorant, and foolish things you've ever said.

ACOSTA: I asked you for a statistic. Can you tell me --

MILLER: We will make a carve-out in the bill that says the "New York Times" can hire all the low skilled, less paid workers they want from other countries and see how you feel then about low wage substitution. This is a reality that's happening in our country. Maybe it's time we had compassion, Glen, for American workers.

BAIER: So Stephen Miller was bringing the heat there.

KRAUTHAMMER: I think he won that round. It is kind of weird to believe that the only people who speak English are Englishmen and Australians. The fact is a high level of unskilled immigrants, some legal, some illegal, are going to depress wages. That's not a complicated economic theory.

Here's the irony. The irony is that the pushback is going to come from the Chamber of Commerce, who I think you could appease by adding a guest worker program as Reagan did, and then the limousine liberals on the left who don't suffer and infrastructure gain by having low skilled people doing their lawns and looking after their children.

The people who suffer from illegal immigration, depression of wages, are particularly those who are the less educated. And it isn't only white rustbelt workers. It's African-Americans, it's Hispanic immigrants, legal Hispanic immigrants. And I think we ought to face up to the fact that if you really want to help the wage stagnation of the country, one way to do it is to not have a flood of low-wage workers, unskilled workers who compete with Americans. That's kind of uncomplicated.

BAIER: This is not the last time we will talk about this.