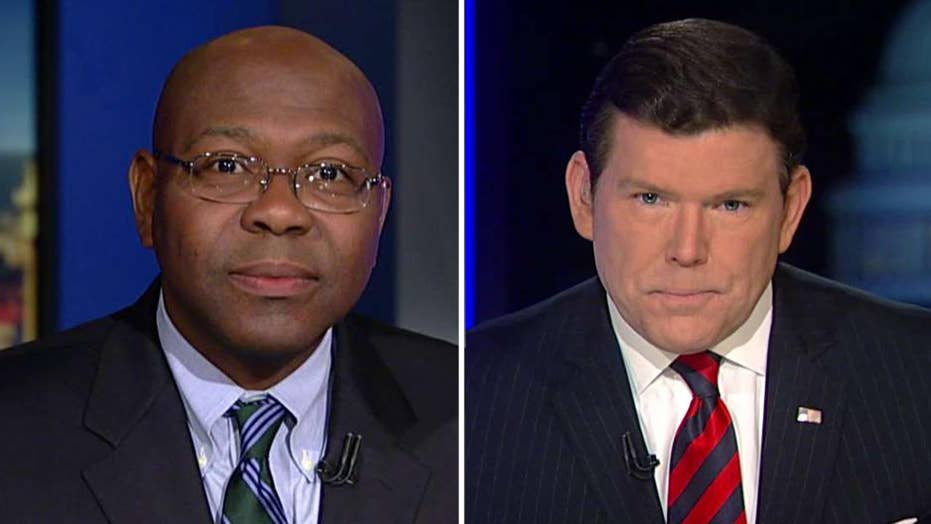 Should Roy Moore step aside from the Alabama Senate race?

This is a rush transcript from "Special Report with Bret Baier," November 10, 2017. This copy may not be in its final form and may be updated.

JUDGE ROY MOORE, ALABAMA SENATE CANDIDATE: Nobody that abuses 14-year-old at age 32 or age 17, it doesn't matter. If you abuse a 14 year old, you shouldn't be a Senate candidate, I agree with that. But I did not do that.

SEAN HANNITY, FOX NEWS: You can say unequivocally you never dated anybody that was in their late teens like that when you were 32?

MOORE: It would've been out of my customary behavior, that's right.

HANNITY: In other words, you don't recall ever dating any girl that young when you were that old?

HANNITY: And you think that's inappropriate too, that's what you are saying?

BRET BAIER, ANCHOR: Roy Moore, the Senate candidate in Alabama, Republican, speaking out today for the first time since these allegations surfaced on Sean Hannity's radio show, as you heard there. This as a number of the Republican senators are speaking out, pulling endorsements, in fact, 32 senators on the GOP side have now pulled endorsements, among them today, you see Senator Mike Lee "Having read the detailed description of the incidents as well as the response from Judge Moore and his campaign, I can no longer endorsed his candidacy for the U.S. Senate." Steve Daines, "I am pulling my endorsement and support for Roy Moore for U.S. Senate."

What about this and where it heads from here as this obviously has taken up a lot of oxygen in Washington? Let's bring in our panel: Jason Riley, Wall Street Journal columnist and senior fellow at the Manhattan Institute; Rachael Bade, congressional reporter for Politico, and Jonathan Turley, law professor at George Washington University Law School.

JASON RILEY, MANHATTAN INSTITUTE SENIOR FELLOW: Well, I'm not sure he did himself a lot favors with that Sean Hannity interview, Bret. We have now gone the past 24 hours where it didn't happen to I don't recall. So that's just in the past 24 hours. We will see how Alabama voters respond. They could say we are not going to let The Washington Post pick our senator. We are going to pick our senator.

At the same time, however, I think what you see with the other senators, the sitting senators distancing themselves from Judge Moore as well as Republicans in general starting to, they don't want this headache. They don't want every member of the press coming up to them from now until the election, what do you think we should do about Judge Moore, do you support him or not? They don't want that.

And the polling suggests, however, the polls taken, or the poll that has been taken since that is, shows that this is now a very close race. We don't know if that pole is an outlier yet or not, but he had a double-digit lead last month. It is now tied.

BAIER: Right, in deep red Alabama for the Democrat to be doing well if that poll is accurate. This is the House Minority Leader Nancy Pelosi and Rush Limbaugh today. Take a listen.

HOUSE MINORITY LEADER NANCY PELOSI, D-CALIF.: In all these cases, it's horrible, it's disgusting, sexual harassment. But in this case, the hypocrisy of it all, I mean, they all pretend to be this, that, and the other thing, but he publicly established himself, the Ten Commandments. He should step aside. They should say that, too.

RUSH LIMBAUGH, RADIO TALK SHOW HOST: The Democrats circle the wagons around their perverts. They do everything they can to protect them. And the Republicans can't wait to throw them all overboard.

The simple fact of the matter is the Republican Party wants this guy gone. But he's not going to leave.

RACHAEL BADE, POLITICO: I think that this is a thunderbolt through the Senate Republican conference. He was never a person they were very friendly and the first place. He ran on this antiestablishment campaign and won the primary that way. But now they are worried that they are going to lose elemental, which is this red state that should theoretically be one of their safest seats in the country.

But they are resigned -- they're not resigned. I shouldn't say that. They're going to try to fight this, I think. And that's why we heard today that they are going to be taking away campaign money, the Senate Republican Senatorial Committee is not going to be funding his campaign anymore. We also are hearing some talk about a potential write in campaigns where they can put Luther Strange on the ballot, well, not put them on the ballot but encourage people to write him in instead of Moore.

BAIER: Or Mo Brooks, I suppose. It would be an interesting battle for a write-in if that happens.

I just want to put up Mitt Romney's tweet today. And this is obviously not a criminal case. But Mitt Romney, who may be running for Senate in Utah, by the way, says "Innocent until proven guilty is for criminal convictions, not elections. I believe Leigh Corfman. Her account is too serious to ignore. Moore is unfit for office and should step aside." What about that?

JONATHAN TURLEY, GEORGE WASHINGTON UNIVERSITY: I'm not too sure I agree necessarily with that statement. If this didn't happen, it would be grossly unfair. That's the interesting thing about this. Someone is lying. And I always look to see who sues for defamation first. That's a pretty good indicator. He has said these women are intentionally lying. He's called them evil. These women have basically described him as a virtual sexual predator. Someone is lying. Someone is committing defamation. It'll be interesting who will sue, if at all.

I think he didn't help himself. I agree with this interview. This idea you are asked if you are basically a predator and you say, well, it's out of my customary behavior is sort of a 1988 Dukakis moment of that's not what most of us would respond. It sounded like it came out of his lawyer's BlackBerry. And so that is not a good start for his public campaign.

BAIER: And to John's credit, that interview, he does press him numerous times throughout that radio interview.

RILEY: Let's keep in mind that this isn't happening in a vacuum. This comes on top of the revelation that he was taking a salary from this charity, which he had denied, a rather large salary, about $180,000 a year. Also let's keep in mind that Alabama voters did run their governor out of office earlier this year after a sex scandal. So they are not going to be OK with just about anything. There is a tipping point.

BAIER: Rachael, what about the White House here? We're seen the White House weigh in and say if true Moore needs to step aside, but also emphasizing that someone's life should not be ruined if it's not accurate. And the vice president weighing in today, saying the vice president has found the allegation and the story disturbing and believes, if true, this would disqualify anyone from serving in office. Obviously, the president campaigned for Luther Strange, his opponent.

BADE: I think the "if true" are the key words there. We are probably not going to see prove of whether or not this is true. So it will sort of be a draw. But going back to what you're saying, lawmakers have resigned for less scandalous things than this. We saw Chris Smith resign from the House after there were reports that he had sent a shirtless picture to somebody he met online. This sort of, I think, speaks about how the "Access Hollywood" scandal has changed politics, and that is the president had his own scandal, he stayed in it, he survived. Clearly, Moore thinks he could potentially stay here.

BAIER: Right, but is Roy Moore Donald Trump? I think that is the question, and a lot of people in Alabama might be saying, maybe not if you can ride out something like this. That is interesting, though, the politics of this and the environment that we are in with all of these cases, you know, from Hollywood to over in England to you name it. It's happening a lot.

TURLEY: He has to look out for one aspect of that Hannity interview which I thought Hannity did put him on the record with great clarity, and that is he said "I never dated anyone in their teens." You have a mother who has apparently told The Washington Post she objected to Moore dating her daughter. If that's true, he could have serious problems with that statement.

TURLEY: Legally and also politically. When you put out something factual of that kind, its concrete, it's provable or disprovable.