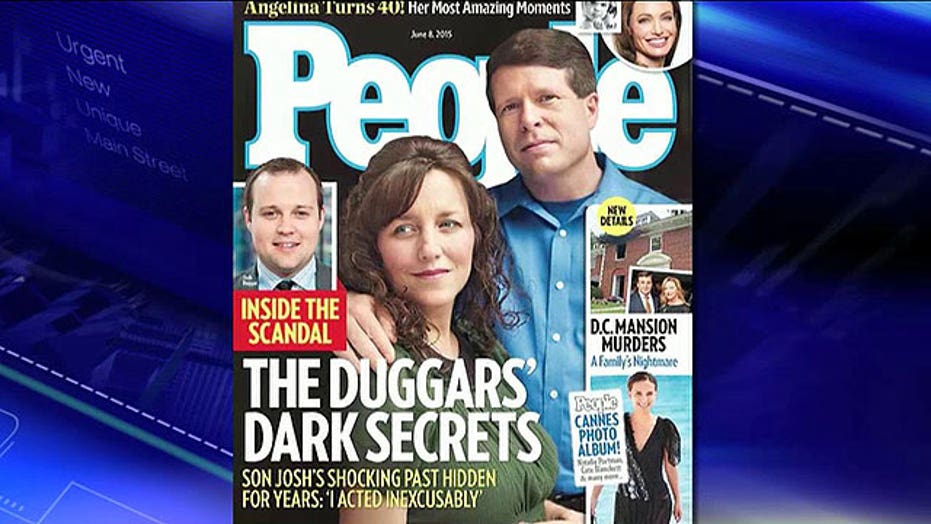 Should police chief be fired for releasing Duggar record?

This is a rush transcript from "The Kelly File," June 2, 2015. This copy may not be in its final form and may be updated.

MEGYN KELLY, HOST: New developments tonight in the Duggar family story. Tomorrow we will sit down with Jim Bob and Michelle Duggar for an exclusive interview which we will air tomorrow night at 9:00 p.m. right here. After a national magazine published a sealed police report detailing how Josh Duggar inappropriately touched several young girls roughly a dozen years ago.

TRACE GALLAGHER, LOS ANGELES CORRESPONDENT: Megyn, the police report containing the allegations against Josh Duggar was released to both In Touch Weekly Magazine and the Northwest Arkansas Democrat Gazette. The release was approved by the Springdale police chief and city attorney.  Exactly why they approved it is still a mystery, because they haven't commented or returned our messages. But the mayor of Springdale supported them, saying, "from every indication I have, the chief and city attorney reluctantly did what they had to do to comply with the state freedom of information law."

Except the freedom of information laws in Arkansas clearly state "Records of the arrest of a juvenile, the detention of a juvenile shall be confidential and shall not be subject to disclosure under the Freedom of Information Act."

So at the request of one of the alleged victims, the county juvenile judge ordered the police report to be destroyed and expunged from the public record, saying it's against the law to directly or indirectly identify the victim of a sex crime.

In this case, the ruling is too little too late, because the police report is widely available online, and even though the names are redacted, there are abundant details of who the alleged victims are.

GALLAGHER: Hester says the chief might also face criminal charges.  Chief O'Kelly had already announced she'll retire at the end of the month.

Critics accuse the Duggar family and friends of trying to sweep this under the rug saying, when Springdale Police took the report back in 2006 the only reason they didn't further investigate Josh Dugger's alleged abuse is because of the three statute of limitations had expired.

Josh Duggar has admitted to bad behavior, saying, "I confess this to my parents who took several steps to help me address the situation, we spoke with authorities where I can confess my wrongdoing and my parents arranged for me and those affected by my actions to receive counseling."

"Nineteen Kids and Counting" have been pulled from TLC's lineup, the future of the show still remains uncertain, Megyn.

KELLY: All of which we will get into in our exclusive interview tomorrow. Trace, thank you.

Mark I looked at the statute myself, and I don't understand how anyone was confused. It specifically says juvenile records are not subject to Freedom of Information Act requests.

MARK EIGLARSH, CRIMINAL DEFENSE ATTORNEY: You don't need a law degree, Megyn, it is crystal clear as Trace pointed out. I did the research as well to see maybe there's some ambiguity somewhere. It's so clear, fundamental to the justice system, the juvenile justice system, since its inception in Chicago in 1899, is that all proceedings, reports and records shall, meaning must, remain sealed. While I'm glad we know this information, I'm equally as outraged as to how we know it. He must be fired.

EIGLARSH: She. Arthur must be fired.

KELLY: I don't see the ambiguity, and I don't see how this police chief avoids answering for what she did.

AIDALA: OK. I've just been retained by the police chief to represent her, and I'm going to say, your honor or ladies and gentleman of the jury, the police chief did exactly what she's supposed to do. She goes to the city attorney, which is the highest ranking lawyer in their community and says here's this request I have, you have to tell me how to interpret it. And they sit down and as crystal clear as the two of you are agreeing that it is, there is a plethora of United States Supreme Court law on the Freedom of Information Act and all different kinds of exceptions. They made a decision that if everyone's name was redacted the defendant and the victims, and that document turned over, you're just turning over a fact scenario, that nobody, and it would have been in the public interest to turn that over.

KELLY: Oh, stop. No, this -- we are talking about the sealed records of child -- I mean molestation victims -- victims who did not consent to have what was done to them released, and the way that this was released, Mark, reveals the identity of the victims.

EIGLARSH: To now expose them and emotionally abuse them all over again, Arthur, with all due respect in your hypothetical, you have a fool for a client. It is clear what the statute...

AIDALA: No, no, no, no. That, your honor, I'm not going to accept your answer.

EIGLARSH: Oh, you accept it.

KELLY: I have a question for you, one of my many questions that I want to get to bottom of in this case. What was she doing handling this in the first place? When you submit a request for information to a police department, you submit it to the public information officer, that's who you ask. You don't go to the police chief. What was she doing involved in this, and why did she personally get the city attorney involved?

AIDALA: Because of whom the individual is, if this was John Doe, you're probably right, Megyn…

AIDALA: The public information officer has to look at who it is and say, wait a minute this is a hot potato. I have to bring this to my boss. That boss is the chief, the chief --

KELLY: You know what, because no one would have had the nerve to release a juvenile record -- whatever you think about Josh Duggar, let's take him out of it, because that's the easier part, you know, he did this stuff and now it's known. He too was a juvenile however so it is very controversial. But the victims, the victims have been revealed and re-victimized by the release of the intimate details. And you tell me Mark, what this does to other sexual abuse victims who are told, talk to the police, it will stay confidential, this will not be publicized. Don't worry, unless some police chief and city attorney decide to ignore the law.

EIGLARSH: That is my greatest concern here. This isn't about this guy. This is about the sanctity of the system, in the future now, the rape victim who's thinking about coming forward, don't worry, you have my word.

AIDALA: You think God forbid, a woman who gets sexually assaulted now in New York City or in California is not going to go reported, because she's going to be afraid?

EIGLARSH: Yes. She may not. She may hesitate.  Oh, Arthur, don't be naïve.

AIDALA: That's insane. That's the politician being a politician.

AIDALA: Number one it's moot because she's retiring in 2016.

AIDALA: Well that's not moot to criminal charges. She should be fired and then prosecuted so that's moot. Number two, she went -- she went to the person she should have gone to, she did the right thing.

KELLY: Would she have immunity from any sort of prosecution?

AIDALA: She probably has immunity under -- what is that Mark?

KELLY: Some doctrine I can find.

EIGLARSH: I'm not helping you, Arthur.

KELLY: How about civil liability, Mark?

AIDALA: Whoa, whoa, whoa. There were no victims' names --

KELLY: Everybody knows that juvenile records are sealed.

EIGLARSH: Everyone knew who those victims were.

KELLY: You know very well if you read that police report, the victims, the family they're a part of and much of their history is documented right there.

AIDALA: Where do you do the balancing test of the purpose of the Freedom of Information Act.

KELLY: I don't need to balance anything, I look at the law. The law is my guide.

AIDALA: What about what the people want?

EIGLARSH: Arthur, its black and white, your client...

KELLY: The people? Really? When Michael Brown and Officer Darren Wilson had their exchange and people wanted to look at his juvenile records, they weren't allowed to do that. They were sealed. We sealed the records of juveniles in this country, because we made a policy decision that we're not going to hold their acts against them, unless a judge says we can release them, or they commit a felony for which they're charged as an adult. Neither of which happened here, that's the bottom line. I got to go, good to see you both.