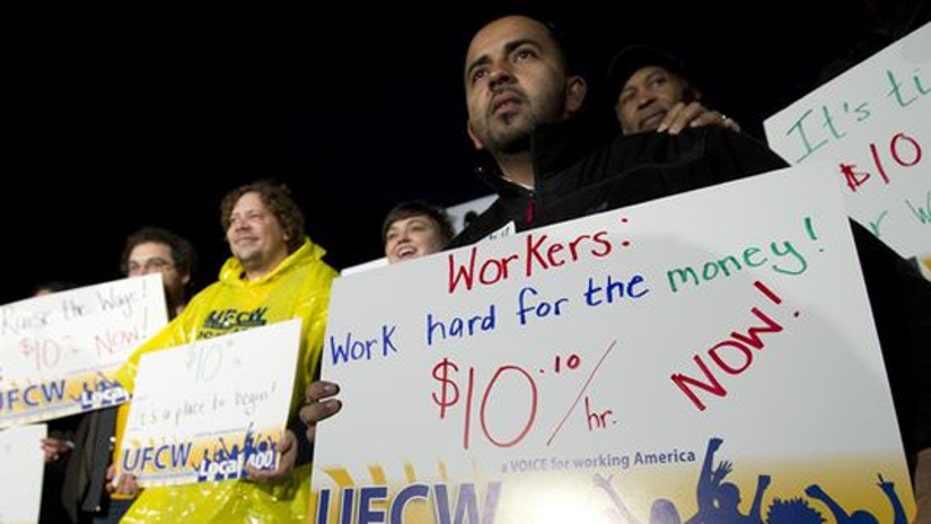 Should Americans push for opportunity to work more or less?

MICHELLE FIELDS: Americans want opportunity, but unfortunately the democrat solution to everything is just to expand the welfare state, which doesn't make people rich; it keeps the poor poor. It doesn't lift them out of poverty. What we ought to be doing is reducing taxes, reducing the regulatory burden on our entrepreneurs so that our entrepreneurs can open new businesses, expand existing ones, and create jobs because that's what Americans want right now. They want jobs. They don't want policies that just redistribute wealth.

WAYNE ROGERS: I think it's even more fundamental than that. When you talk about equality you have taken away freedom. Freedom and equality cannot exist simultaneously together. If you have freedom, you have the freedom to move, to go up, to do better, to do things that you want to do, to be ambitious. And everybody's training isn't the same. Everybody's brain isn't born the same. Some people are born smarter than other people. Some people are worse off than others. But you always try to raise yourself up to the best of your ability. The President is wrong.

JUAN WILLIAMS: This is so offensive to me I just don't know where to start. The president said we've got to do a better job for hard working Americans, people who go to work every day and sometimes work two or three jobs but can't get ahead in this country right now because all the reward is going to the super rich. That's where the money is going. It's not that we have a shortage of hard working people. Basically what we're hearing from the Republicans is Marie Antoinette 21st century style "let them eat cake."

JONATHAN HOENIG: I just have to say it's a little ironic. Juan talks about the GOP saying "let them eat cake," it was the President, of course, his wife who tweeted a picture of their dogs dining at a glass table. I've got to tell you, both Christie and Obama are evil in this case. Inequality is a fact. It's a medical, physical fact. It's not good, it's not bad, it just is. Some people, to Wayne's point, are born smarter than others, more connected, more wealthy. This is just reality. Do I have the same, to Christie's point, income opportunity is Paris Hilton, is Lebron James-no. At this point I think it's exactly why people are abandoning both parties. They're both advocating for the same thing: sacrifice and control over people's lives.

WAYNE ROGERS: I'm a believer in civil disobedience. We have a tradition that goes back to Martin Luther King and Ghandi and those kinds of people. Civil disobedience is one way for people to express themselves. I think that part is fine. The fact of the matter is though that if you show up on some guy's law at 10 at night, you deserve to be arrested. So if you're going to be civilly disobedient, then you suffer the consequences. So if these kinds of things are going to take place, then the law should take place, and deal with it appropriately. So if somebody is going to do that, yes you have the freedom to do that, you also have the freedom to get arrested.

JUAN WILLIAMS: It's not something that I would endorse, but let me just say that when you see the right wing engage in things like going to the military funerals because the military allows gays, and says "we are opposed to the military and gays"-that's so awful.

MICHELLE FIELDS: This is such a double standard. The Tea Party had peaceful protests and they were vilified. Can you imagine if the Tea Party did this? It would be front-page news. Going with torches to Al Gore or George Soros' house-it would be all over the news. But no one is even covering this except for Fox News because the media doesn't care.

JONATHAN HOENIG: This isn't a protest. A protest-you hold signs, you write letters, you boycott a product. I mean it's the clan that showed up at people's houses in the middle of the night with torches, summoning them in the middle of the night. That's what the clan does; operating through brute force, through intimidation. That's what the environmental movement is all about. Could you ever see a Tea Party group doing this? Can you ever see any legitimate executive, or anyone who worked at a legitimate corporation doing this? They would never consider is because in the world of trade we operate through mutually beneficial trade and agreement. Not force, showing up at people's houses, and demanding that they succumb to your will.

MICHELLE FIELDS: Can you imagine if this were Bush? The media would be going crazy, saying he was acting like a king or something. But this is an imperial president. What Obama is doing is not right at all. What is he doing? Every morning he wakes up and he just decides which laws he wants to follow and which laws he doesn't? It's not right.

JONATHAN HOENIG: Of course this is not how government is supposed to work, Eric. The reason that they're giving Obama a pass and not Bush is that Bush was perceived as being self-interested, right? I mean his use of executive action was all about his rich oil buddies or Halliburton, his own cronyism. Obama is perceived as being out for the common good. And of course if you buy Obama's argument, that in fact you are your brother's keeper, than the GOP are obstructionist standing in the way of Obama giving everyone his common good, i.e. free health care, free education, free everything.

JUAN WILLIAMS: I think that you should go back to the Congress, but let me just tell you that President Obama hasn't used his executive order authority half as much as Bill Clinton and half as close enough as President Bush.

WAYNE ROGERS: I think Juan is absolutely right. We have had a history since the new deal of doing this, and it's absolutely wrong. It's against the Constitution. The Constitution is very clear about this. We have now what is called an administrative government, in which it's the intent of Congress to do so and so and so, and it's passed on to some agency, then the agency makes up regulations and rules that become law, and if you violate that you're against the law. That's wrong. We should go to the Congress.