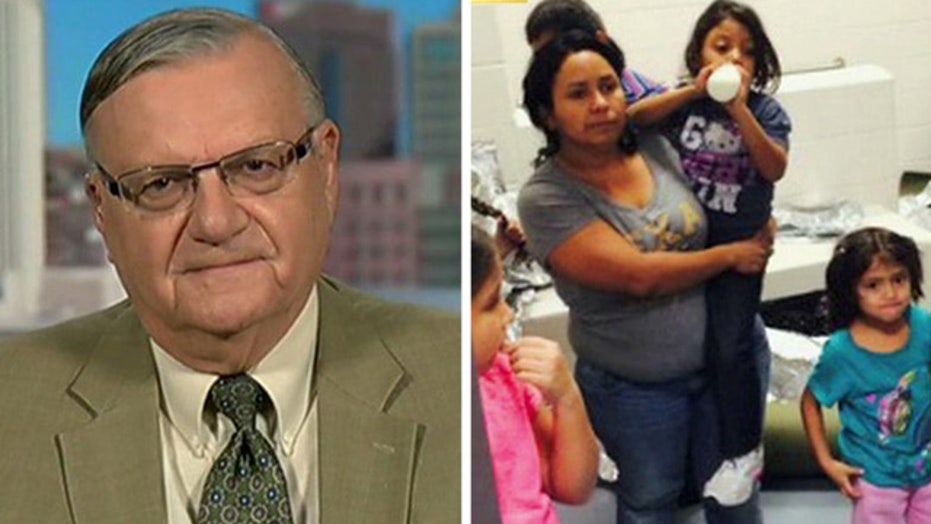 Sheriff Joe Arpaio on what's behind the border surge

This is a rush transcript from "Hannity," June 16, 2014. This copy may not be in its final form and may be updated.

SEAN HANNITY, HOST: The humanitarian and national security crisis at our nation's border is getting worse by the hour.  Droves of unaccompanied children are arriving each and every day. Many are bussed over to crowded holding facilities where they face horrible living conditions. And now the brave men and women dealing with this mess, our nation's Border Patrol agents, are allegedly being told if they dare to speak out about the situation, they will be disciplined or possibly even charged with a crime.

Here with reaction, Maricopa County Sheriff Joe Arpaio. Joe, I know that would never stop you from speaking out, but we had a report earlier in the show, John Roberts is down at the border. All weekend long people are paying $100 to get on wave runners or boats and going across the border. They put their foot on American territory and we just take them to Phoenix or Tucson or some other facility. What are we doing here? Why don't just send them back across the water?

JOE ARPAIO, MARICOPA COUNTY SHERIFF: Put them in an airplane, $400, send them back to where they came from. It's cheaper, more humane. By the way, you talk about the Border Patrol, they are too busy changing diapers and not going after dope peddlers and illegal immigrants. And I think the president knew this was going to happen, so it's going to help him on his executive orders if Congress doesn't take this mission up. But it might backfire. It might backfire because of the inhumane situations. The media finally got with it. I was on your station 10 days ago talking about this, so I'm glad that now it's gone into the media and the government officials are talking about it.

HANNITY: But what I'm trying to understand here, now, if I were to take a truckload of illegal immigrants and bring them to Tucson or Phoenix or Maricopa County, what would happen if I got caught? I assume I would be arrested, I'd be handcuffed, perp walk, mug shots, the whole bit, right?

ARPAIO: Well, I wouldn't bet on it, because there's a lot of court decisions, especially after me and the Department of Justice trying to put cuffs on me. So I lost some of my authority, but we're still working it.  No, I don't think it's going to happen.

HANNITY: But the point is our government is literally dropping illegal immigrants off, and now Eric Holder is talking about not only giving them attorneys but giving them doctors and the American taxpayer paying for health issues.  Apparently there's a lot of staff and some other health issues that are really serious in these facilities, right?

ARPAIO: You're right, that's a legal situation. I know our Arizona attorney general, Tom Horn, is thinking of suing the government. But it's more than just a legal problem. It's a political problem that's occurring on immigration, Sean. You know that. It's been going on for quite a while.

But I think they don't understand, the White House, that they opened up a can of worms on this. And we'll see how it settles. This is a great country. You're trying to tell me we can't keep people from coming into our country if we really had the desire to do it? I don't buy it. There's something wrong.

HANNITY: What's the latest in your battle with the White House?

ARPAIO: They're still after me. The DOJ still battle me. It doesn't bother me. I'm still doing my job. I'm the elected sheriff, and I'm going to keep doing what the Constitution says I can do.

HANNITY: All right, Joe, I appreciate it. Are you still giving out baloney sandwiches and pink underwear?

ARPAIO: I took all the meat away. Now it's now vegetarian.

HANNITY: Vegetarian? Is that cheaper?

HANNITY: I should have known. By the way, I watched you walk through your jail. You're like a rock star, even though you treat prisoners the way prisoners should be treated. It's pretty amazing.

ARPAIO: Maybe I'll get half the vote, that's OK.