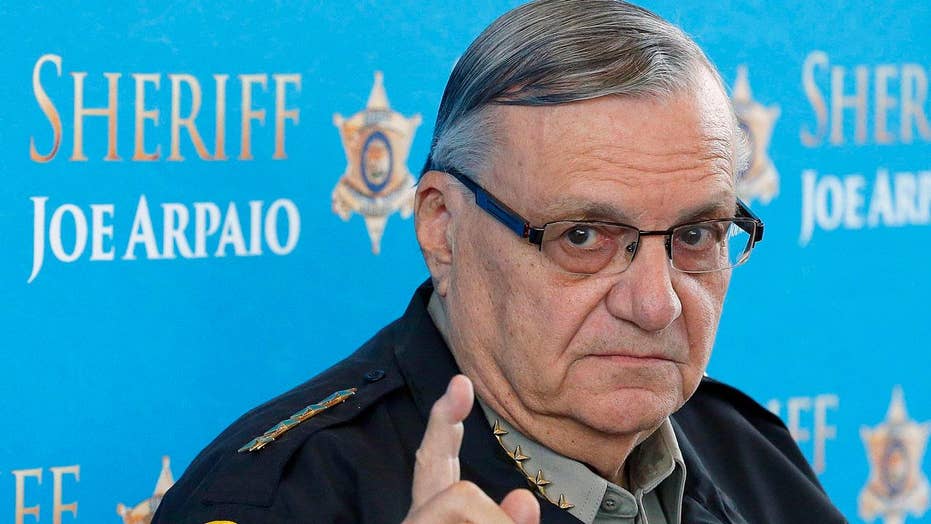 Sheriff Joe Arpaio: My case is strictly a political hit

On 'Your World,' the former Arizona Maricopa County sheriff on the possibility of being pardoned by President Trump

This is a rush transcript from "Your World," August 23, 2017. This copy may not be in its final form and may be updated.

DONALD TRUMP, PRESIDENT OF THE UNITED STATES: Was Sheriff Joe convicted for doing his job? That's what -- I'll make a prediction. I think he's going to be just fine, OK? But I won't do it tonight because I don't want to cause any controversy. Is that OK? All right? But Sheriff Joe can feel good.

NEIL CAVUTO, "YOUR WORLD" HOST: All right. So say it is so, Joe. Former Maricopa County Arizona sheriff, Joe Arpaio getting some upbeat news from no less than the president of the United States yesterday, indicating that some good news come be coming his way. Remember, he's been battling a criminal contempt citation in Arizona here that could land him behind bars for six months. But the president seemed to telegraph that a pardon could be in the offing or something nice.

JOE ARPAIO, FORMER ARIZONA MARICOPA COUNTY SHERIFF: I was not invited but my gut told me not to show up. This will be the first time that I did not show up for his rallies, but I didn't think it was feasible because of the possible danger. I didn't want to cause -- be the cause of any demonstrations, riots, and that type of thing. I missed not going. I have been to all of his rallies, but safety was more important to me right now. Public safety.

CAVUTO: But to be clear then, sheriff, it doesn't sound like anyone at the White House told you not to come. You made that decision.

ARPAIO: No one -- yes, no one told me not to come, but no one said I was invited either. So it was -- it was my decision not to go, but I missed it. It was a great evening for me. I really appreciate the president's nice comments and support. And one day I'll go public and talk about the tremendous abuse of the process. And that they can do what they did to me, they can do it to anybody. So that's not coming up right now. We'll just see when I'll be talking about it.

ARPAIO: First of all, it started 60 days after Obama and Holder took office. That's when this started. And here we are now I'm being charged with a misdemeanor contempt of court, sentence would be the same for barking dogs. They announced this the day before early voting. And then they went again and charged me two weeks before you go to the polls. So this is strictly a political hit. And I'll be talking about this in the future. Because what they did to me, they can do it to anybody. So we'll see what happens when this thing is resolved.

CAVUTO: You know, sheriff, not too long after this sentence was handed down, you did publicly acknowledge that you might have violated that judge's order but that it was not intentional. What did you mean by that?

ARPAIO: Well, it was not intentional. My guys were doing their job. We had the authority under the program with ice to do this from 2007 to 2009. That's what this contempt -- that was the period they filed the contempt against me, but we had the authority to do that. I don't want to get too much into this legal situation right now, Neil, but I'll have my day to talk later on.

CAVUTO: Does it bother that you in the interim of all of this you've been sort of held up as a poster boy for racism? I think it was the American Civil Liberties Union that criticized even the thought of the president pardoning you that it would be account to an official presidential endorsement of racism? What did you make of that?

ARPAIO: Well, I'm not going to get into the ACLU but they're part of this abuse of the progress and process and we'll talk about that later. She can say whatever she wants. Of course, they're going to go against me. I'm like the poster boy. They've been after me since I started fighting the illegal immigration problem 8, 10 years ago under the state law which we had the authority under the federal law when they train and score in 150 of my officers. So we'll see the bigger picture once again is the abuse of the process.

CAVUTO: Let me get your sense then of what the president was hinting at last night, Sheriff. Has he talked to you personally on the phone lately?

ARPAIO: No, he has not. And that's OK. They put a press things out that there would be no mention of this at their rally. But knowing the president, he has guts and courage. And my gut told me he was going to do it. Of course, everybody said no, but I know the man.

CAVUTO: So you think even in light of Charlottesville and what happened there and that maybe that's why such a pardon would be considered is being delayed, do you think that's a factor here?

ARPAIO: Oh, I don't know, but he wasn't ashamed. He really went out there and talked about it. That's him. He's still in charge. He's the president and I have a great deal of respect for him. I always will have pardon or no pardon. I'm with him till the end. As long as he's the president I will support him and I wish a lot of other people would do the same, including some republicans.

ARPAIO: I'm not going to get into that situation but there is a few out there that talk -- you know, talk public, there are some that don't talk about it. They do it behind his back. But why can't everybody get together, the democrats and the republicans support our president? He's a great guy. He's going to go down as one of the greatest presidents we ever had.

CAVUTO: Well, you know, last night, Sheriff as, you know, he talked about building a wall and he would risk a government shutdown to force the funds to make that happen. What do you think of that?

ARPAIO: Well, it's great. Let me tell you why illegal immigration has gone down because he talked about it and they're afraid now. That's how you do it, you talk about it and they don't come across because they know they're going to jail. So just talking about there's a big deterrence and that's what he likes to do and it's really successful although he doesn't get any credit for speaking out, but that's very important, whether it's foreign policy, domestic policy. Hey, go public. Tell everybody.

And when you can. I'm not talking about sensitive situations. So let the people know what you're going to do and let the bad guys know. He loves the cops. I know that personally. And he's going to back up the cops. And the veterans. He loves -- and the military today. So that's a type of guy he is. Why should he keep it quiet? Every time he says something, whatever they do, they tear him apart. That's bad.

CAVUTO: Do you get a sense of now, sheriff, however this is resolved -- I mean, maximum, you know, jail times, six months if this -- if they ever enforce that. You're 85 years old. Do you think a judge would enforce that?

ARPAIO: I have no idea. I have two good lawyers now and we're -- you know, we're in the process -- but, you know, hey, Neil, I got four -- two parking tickets in my whole life. Think of that. Two parking tickets. 55 years. Joined the army when the Korean War broke out. Now I got to sit at a defense table as a criminal when I did nothing wrong? Come on. So...

CAVUTO: When you -- when you would round up illegals, what was the criteria that you used that became so controversial? What was it?

ARPAIO: Well, first of all, I had the authority of my people to do it because we had the authority act as immigration officers. Number two, there was certain criteria. We didn't go around stopping people because of their color. We stopped them on a violation of law and pursuant to that, if they're here illegally and the Supreme Court says today that you can do that, stop people and ask where they're from. So it's a very controversial situation. A lot of people don't understand it. So I'm fighting it out and we'll see what happens.

CAVUTO: Are you after all of this bitter?

ARPAIO: A what, Neil?

CAVUTO: Are you bitter?

ARPAIO: I am -- I am -- I don't like going negative. You know me, but I'm a little discouraged. It is not for me, it's for everybody because what they did to me they can do to anybody. Believe me. And they can do to the president, which they're trying to do anyway. So it's a bigger picture than the sheriff.