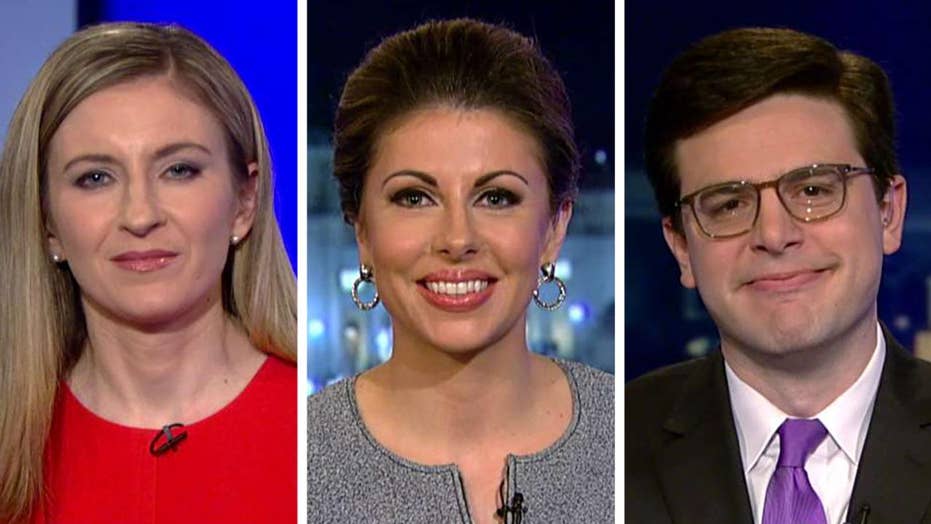 Florida braces for recounts in Senate and governor races as Arizona Senate race remains too close to call; reaction and analysis from the 'Special Report' All-Stars.

This is a rush transcript from "Special Report with Bret Baier," November 8, 2018. This copy may not be in its final form and may be updated.

SENATE CANDIDATE RICK SCOTT, R-FLA.: I want to thank President Trump. If you just stop and think about it, from where we started eight years and seven months ago, it's just hard to believe we are here tonight. I have no interest in looking backwards. I'm going to look to the future, and we have a bright future in front of us.

MARC ELIAS, NELSON RECOUNT ATTORNEY: We did not seek this recount. Senator Nelson did not ask for this -- did put out the statement because it is automatic but rather because we believe that at the end of the process, Senator Nelson is going to be declared the winner.

BRET BAIER, ANCHOR: OK, in Florida, the state law is that half a percent or less separating two candidates goes automatically to a machine recount. If it's a quarter of a percent or less, it then goes to a manual recount. Here's where we are tonight. The Florida Senate race, Rick Scott at 4,091,645 votes, and there you see Bill Nelson. And the difference 0.22 percent. That would fall into the manual recount territory.

Florida governor race, and there you see the separation between Ron DeSantis and Andrew Gillum. This is under the half a percent difference, and that goes into a machine recount automatic, even after Andrew Gillum conceded on election night. The Gillum campaign put out a statement, "On Tuesday night the Gillum for Governor campaign operated with the best information available about the number of outstanding ballots left to count. Since that time is has been clear there are more, many more uncounted ballots that originally reported. Our campaign along with our attorney, Barry Richard," Barry Richard, you may remember, from the recount in Tallahassee in 2000, "is monitoring the situation closely and is ready for any outcome including a state-mandated recount. Mayor Gillum started his campaign for the people and we are committed to ensuring every single vote in Florida is counted."

Since this show has started, I've been texted by political operatives on the left and the right who have been getting bombarded by emails that say recount alert, recount update, basically all asking for money for lawyers from both sides to flood to Florida. Here we go again.

MORGAN ORTAGUS, NATIONAL SECURITY ANALYST: I think I'm fourth or fifth generation Floridian. And I worked for then President Bush in 2004, and Congressman Adam Putnam. So worked campaigns there and know what an interesting state it is.

BAIER: It is. It's a fascinating state. It always comes down, it seems, to one point in big, contentious races.

BAIER: But this is really interesting. With all of the different issues in Florida, you have, among other things, Puerto Ricans who came from Puerto Rico after hurricane Maria, American citizens who had the right to register, and some 200,000 plus apparently did. And there are all kinds of questions about hurricane Michael and what they did to affect the ballots in Bay County and other places. Thoughts?

ORTAGUS: So there's two things that we excel at in Florida, it's hurricanes and recounts. So this is the season for both those things.

I think what's going on here is this is, at this point, it's almost a second election within an election. And we have really moved past the general election. This is going to be coming down to legal, as you just said, lawyers and PR strategy. I think the one thing that the Florida recount has in common with the Arizona recount, with the Georgia recount, is Republicans on the Senate and governor's races are ahead in all of these.

So what you're going to see again over this next week is this is going to be a court battle. This is going to be a PR strategy. I'm sure going to continue to get texts as it goes back and forth. But I think that we will likely still, when you look at what's happening in Broward County, and I challenge everyone to look at Senator Rubio's comments, his tweets on this this afternoon, he detailed, and Politico has talked about this. He linked to several articles about the corruption of the Broward County elections office. So you're going to hear really wild stories. I think what will happen is in the end the Republicans for governor and for senate will still come out ahead, although we are seeing the statewide office of agriculture commissioner, which is very important in Florida, that the Democrat is actually ahead now.

BAIER: Catherine, we are getting worried that Rick Scott is going to speak in Tallahassee at 8:15 tonight, pushing back on Democrats' recount efforts and calls. It's not really a choice. In Florida, it's automatic if it's under a half-a-percent.

CATHERINE LUCEY, ASSOCIATED PRESS: It's automatic, although I think the person behind could waive the recount, or challenge. But it's an automatic recount that happens. And I think the political story here is very interesting as well, which is the results of this have a lot of influence on 2020. This is a state the president took in 2016. He wants to keep Republican control. Obviously that sends a message. It means he has people in the right jobs going not that race, the influence.

And I think coming out of these midterms, one of the big stories of the midterm was you were seeing a sorting of where Republicans and Democrats are in this country, and which states, where states fall. And Florida is still a true swing state. That's what we are seeing with potentially three recounts coming down to the wire is the state continues to be a huge battleground.

BAIER: I spent 40 days and 40 nights in Tallahassee in 2000, looking -- bouncing from courtroom to courtroom and looking and hanging chads. This could take a while.

MATTHEW CONTINETTI, THE WASHINGTON FREE BEACON: We all had that moment I think this afternoon of flashback. Here's the difference, and it's in the margin. So it's about 17,000 votes right now in the Senate race, it's even larger in the gubernatorial race. In 2000, it was hundreds of votes. It's very rare for a recount to shift the decision that we find on election night. The last high prominent one was in 2008, Minnesota Senate, Norm Coleman versus Al Franken. There too it was a shift of several hundred votes, under 1,000.

So I am looking for the votes that will get the Democrats to make up these margins. I also think it's very important for Governor Scott to speak out, because what you see from the Marc Elias statement, he was Hillary Clinton's lawyer in 2016, he's a Democratic powerhouse, he is clearly trying to go in strong and dominate the narrative at the outset. Scott cannot allow that to happen.

BAIER: Which is why you're going to see this press conference tonight at 8:15.

I want to bounce to two other states. First in Georgia, the Georgia governor's race. The Democrat, Stacey Abrams, is not conceding as of yet. There's a difference of 62,724 votes as of now. And Brian Kemp withdrew from the secretary of state position today, saying he is making the transition to governor-elect.

Here's the other one, Arizona. We should know in about 15 minutes about some of the other ballots. There's about 600,000 plus yet to be counted in this race. There's a slight lead here, 17,000 votes, 16,778, for the Republican Martha McSally. We have some areas, in Maricopa County, for example, coming in possibly tonight where Sinema could pick up. So that is really up in the air.

ORTAGUS: What's fascinating to me about the Arizona races is McSally actually ran double digits behind Ducey in this race --

ORTAGUS: The governor, yes, who ran for re-election. So you really saw independent voters, suburban women, which we've talked about quite a bit leading up to this election, do a true split ticket vote in Arizona, voting for Republican governor and then voting for the Democrat female candidate for Senate. And again, that's why I say I think Republicans have some very hard lessons to learn about Arizona, especially when it comes to the machine. This race is a classic example where the governor is incredibly well-liked and did get those independent votes.

BAIER: Catherine, last thing. If -- let's just play the if game -- Sinema pulls out a win in Arizona, somehow Nelson finds the votes in Florida, you have a Mississippi runoff at the end of November where there will be a lot of attention on that, potentially would only be a one seat pickup for the Republicans if it went the wrong way in a Republican point of view. And that would change the dynamic about, that makes Murkowski and Collins and the people who really are in the middle much more powerful with a one seat majority.

LUCEY: Absolutely. The narrative out of the White House after Tuesday was we have gains in the Senate, we are coming in strong, there's a lot of things we can do, like judges, appointments. There are things we can do just with the Senate. And that absolutely gets harder if you are staring at the kind of tight majority that they've had over the past two years.