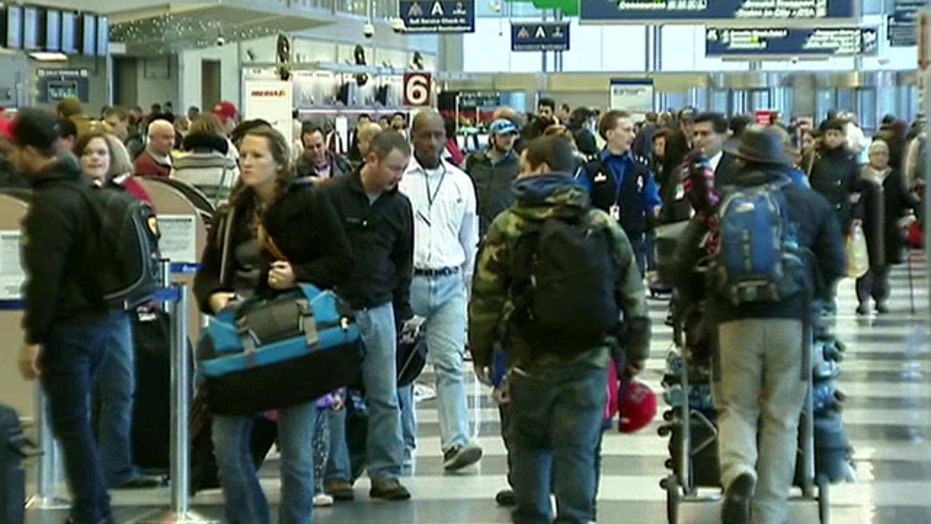 CHARLES PAYNE: A very small fraction of the country even thinks we're heading in the right direction. I have to tell you this whole sequestration has taken it to another level. The President has to understand that compromise. He can't offer a compromise and say if you don't accept it, you're not compromising. In other words, a compromise is give and take on both sides, but fanning the flames of fear on this thing...I think was not only disingenuous, but harmful. I mean listen, I know the President's in a win-win situation because if the economy grows a little bit better than expected he can say, "Hey it took off even though we had sequestration... and if it grows a little bit slower... I told you that thing was going kill us," but it's time to stop trying to win a PR war into getting the economy going.

DAGEN MCDOWELL: The worst case scenario for the White House is that there is no discernible economic impact felt by a broth swath of the United States and that would be proof that, hey, we can cut spending, Even if we cut it in the most draconian way - we don't have an economy. In a haphazard way, and in a ham-handed way, we haven't done any real hurt to the nation.

CHARLIE GASPARINO: I think the President has a real PR problem since the dire predictions that I know he came out with in his press conference said we're not going to enter the apocalypse. This is after predicting the apocalypse for like months. He has a real PR problem because the apocalypse at least coming from the White House has been baked in a lot, and listen there'll be some pain I'm sure. I mean government workers are going to take it on the chin a little bit. We should point out that a lot of government workers live in DC and guess what? That place benefitted from all the government spending. There's a huge boom in the DC area. I think that his problem is going to be PR when the apocalypse doesn't come. People are going to say this guy is full of you know what and he is, especially on this subject.

BEN STEIN: Well I think the real crisis is not so much the economic crisis that affects the ordinary citizen, although we do know to Charles' point that tens of thousands of defense civilian workers are going to be laid off. And for those people it is a real catastrophe to lose your job, even to lose it for a few weeks, it's a real catastrophe. I think the real catastrophe is that the government will not compromise. I mean this isn't the third reich, it's not supposed to be run by absolutes...it's supposed to be run by some people giving, other people giving, not everyone getting what they want. The fact that the government cannot compromise and cannot come to a decision in the spirit of compromise for the sake of the country - that's the crisis.

ADAM LASHINSKY: I'm going take a slightly tack on this Neil. I mean I don't disagree with anything that's been said, but you know I think that the American people deserve a fair amount of the blame here too. You know public opinion polls say we're not happy with the way our leaders in Washington are leading, but at the very same time, we don't ever want them to cut any of our programs. The electorate is completely two-faced on this issue, so it's not terribly surprising to me, but the leadership in Washington is two-faced also.......nobody ever agrees with me on this program anyway, so it's ok I guess...you can come to our viewers defense, Neil. But I think people, I think voters, citizens, will be aggravated by some of these cuts, and they'll experience it in different ways, and so we'll see what happens. I don't think that because we haven't had Armageddon by this morning doesn't mean there will not be considerable pain down the road.

BEN STEIN: It's terrifying. All of life is a balancing act and we want the companies to control the health care costs, but individual privacy, the right of individuals to decide what to eat without their bosses telling them, that's basic. I mean, we're now in the world of George Orwell if your employer can tell you what to eat. It's a frightening, beyond frightening, terrifying situation.

ADAM LASHINKSY: Well, I'm far less concerned about this than Ben is. I have a very libertarian and capitalistic perspective on this that if I want my employer to pay for my health insurance I'm willing to let my employer monitor my health.

DAGEN MCDOWELL: No, but Adam, you're living in lala land. The issue is that you don't know what the company is looking at. So, it's out of sight, out of mind mentality that's extremely dangerous. It's frightening.

CHARLIE GASPARINO: And I'm trying to figure out how to support this and I've been thinking about it all morning. How do I support this? And I can't. It's insane and Adam this is the antithesis of libertarianism. They're going to be showing up at the door.

CHARLES PAYNE: I've got to tell you, I run a business and it scares me the most when my employees have a big breakfast or a big lunch. I don't want to control their lunch. I've seen guys with a steak and mashed potato and think.

CHARLES PAYNE: A gigantic disconnect. Corporate America is making a whole lot of money, a lot from outside this country and a lot in this country. The bottom line they're putting the money work to buy at that stock, to put out special dividends because they're afraid of the administration.

BEN STEIN: This is typical of corporate behavior as they want to fire as many people as they can, to squeeze out as much productivity per worker. It's perfectly legitimate and whether you're a republican or democratic person, that's the way business operates. Business is about the bottom line.

CHARLIE GASPARINO: Anyone with a straight face who could say that business leaders aren't reacting to fiscal policy coming out of the White House, that's an insane statement.

DAGEN MCDOWELL: They're trying to maintain profitability by cutting head counts and it's hard to grow in this environment because the economy is so weak.