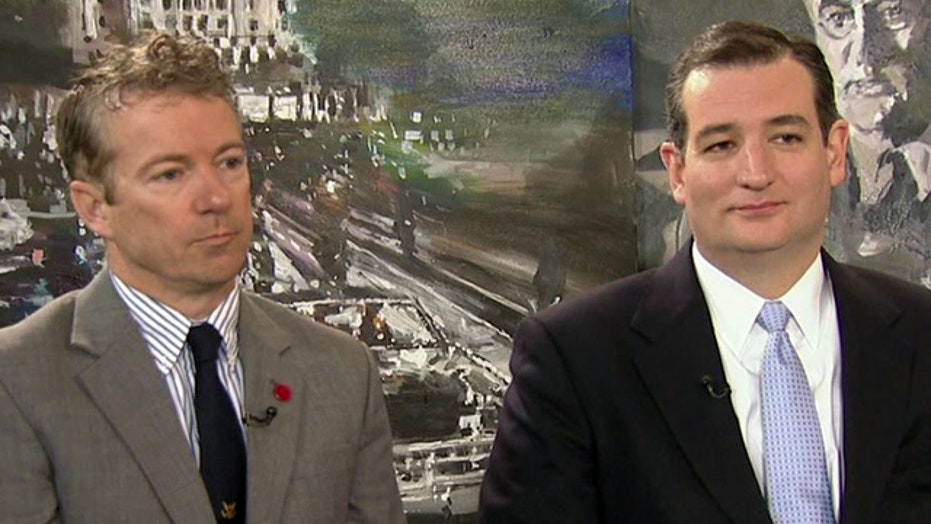 Sens. Cruz, Paul on how Obama is disregarding Congress

This is a rush transcript from "Hannity," January 29, 2014. This copy may not be in its final form and may be updated.

SEAN HANNITY, HOST: Kicking things off tonight are two of the most conservative senators in Washington, who say what they mean, mean what they say, Senator Ted Cruz of Texas and Senator Rand Paul of Kentucky.

Gentlemen, how are you?

SEN. TED CRUZ, R-TEXAS: Sean, great to be with you.

HANNITY: Good to see you. Good to see you, Senator. We talked a lot about the president, the use of executive orders. I guess what he can't get done legislatively, he's going to use executive fiat? Legal? Not legal?

CRUZ: Absolutely not legal, and really dangerous. I mean, it's been the pattern of the Obama presidency over and over again to just disregard the Congress, disregard the law. You know, Sean, we've never had a president like this. You take something like ObamaCare, he unilaterally granted an exemption for big business. The law doesn't allow that. He said big business gets an exemption. He unilaterally granted an exemption for Congress. The law doesn't allow that.

And most strikingly, when over 5 million people had their health insurance canceled because of ObamaCare -- usually, the way our constitutional system works, if a federal law isn't working, the president would go to Congress and say, We need to change this, we need to and fix it. Instead, the president just held a press conference in which he told insurers, I'm instructing you, private companies, issue laws -- issue insurance policies, rather, that are illegal, that ObamaCare banned.

In over 200 years of our nation's history, Sean, we have never had a president just tell private citizens, Violate the law, I'm the president and I'll give you a "Get out of jail free" card.

HANNITY: All right, so we have co-equal branches of government, Senator Paul, right?

SEN. RAND PAUL, R-KY.: At least once upon a time we apparently did.

PAUL: No, I think the president's changed the Constitution. He's decided that it's optional and he's going to obey it when he feels like it. But really, this is a problem. This isn't a Republican-Democrat problem. This is a separation of powers, this is the checks and balances of government. And basically, democracy is messy. It takes -- you have to work and you have to try to convince people. But it's not very conciliatory to say, yes, I'm going to work with Congress, except for if they disagree with me, then I'm going to do whatever the hell I want to do. And so that's a real problem. And no, I foresee that he isn't going to try to work with Congress. It's either his way or the highway.

HANNITY: So it's confrontational. I took that to be...

PAUL: I think it's an arrogance. It's an arrogance and it's confrontational. And really, do you think that brings people more likely to talk with him when he says, I'm going the do it whether you like it or not?

HANNITY: All right, let's take a trip down memory lane. We have a montage of then candidate Obama railing against then President George W. Bush over the use of executive orders. And will these words come back to haunt him?

PRESIDENT BARACK OBAMA: There's been a tendency on the part of this administration to try to hide behind executive privilege every time there's something a little shaky that's taking place. And I think you know, the administration would be best served by coming clean on this.

And I think one of the biggest problems of the last eight years has been the degree to which President Bush has taken almost the opposite tack, that secrecy and concentrations of power in the Oval Office.

CRUZ: He's right, he doesn't use signing statements. You know how he granted a waiver to big business? Through a blog post by an assistant treasury secretary. It's just openly defying the law!

The Constitution puts on the president a responsibility to take care that the laws be faithfully executed. And you know, Sean, it is striking. Two people that are absent from this, two players, number one, Congress. Congress should defend its constitutional prerogatives. When the president said he will act if Congress doesn't act, just about every Democrat in the chamber jumped to their feet applauding! It is extraordinary to see Democrats abdicating their role under the Constitution to protect our liberties!

But number two is the media. Where is the media? If we had anything like an impartial media, they should be calling the administration to account. If this were a Republican, they'd be lighting their hair on fire!

HANNITY: Let me give you two more examples, Senator Paul, not enforcing immigration law, dictated (ph) a second one, recess appointments. I thought those were supposed to be made when the Senate was in recess.

PAUL: Well, you know, he's going to be rebuked on that. The appellate court has already rebuked him. It's going to go -- the arguments have been heard at the Supreme Court.

But it's one thing after another, and Ted's exactly right. It's initiation of war on its own, it's amending legislation on its own, it's writing legislation on its own. You know, Montesque talked about the separation of powers, and that's where we got some of the ideas for our founding documents. And he said when the executive assumes or usurps the legislative authority, when the executive -- when the president attempts to write laws that that's a form of tyranny that we need to fear.

But I think there's also the hypocrisy. American public doesn't like hypocrisy. Here he was, ranting and raving, It's all Bush's fault and Bush was so terrible, and then he's taking all of those things and gone one extra step and created himself his own little kingdom here.

And but it's also (INAUDIBLE) Ted says, Where are the Democrats? I would be standing up today, were this a Republican president, and I think Ted would do the same thing. We would stand because we have beliefs in the separation of powers and in the Constitution. I would stand up and challenge a Republican president. Where are the Democrats that will challenge him on this usurpation?

HANNITY: I agree with you about the Democrats, but then we've got to go to the Republicans. Both of you have had an intramural struggle with prominent Republicans. You invited Governor Chris Christie to a beer summit...

HANNITY: Is that right?

HANNITY: It's all over?

HANNITY: It's all under the bridge?

PAUL: We have all gotten -- we're all getting together now...

PAUL: We are all getting together now. We're going to be a big happy party, I think.

HANNITY: Was (ph) Senator McCain? Because I agree with both of you on this issue. I think he's usurping power from the Congress, separation of powers, coequal branches of government. And Senator John McCain has been a vocal critic of you, as have others. Why hasn't the Republican Party united on -- this is a constitutional principle.

CRUZ: Well, look, I think the way we unite Republicans is we stand for principle. And if we're standing to defend free market principles, if we're standing to defend the Constitution, that brings together Republicans across every stripe, whether they are conservatives or libertarians or whether they're right in the middle. That brings together independents and moderates. Get back to the principles this country was founded on. That's how we unite the Republican Party.

And you know, the more brazen the president is -- I mean, what he's started saying now is, I have a pen and I have a phone. You know what? If you want to bring back jobs, he doesn't need a pen. He needs an eraser. He needs to get in and start erasing these job-killing regulations. He needs to start erasing the incredible damage ObamaCare is causing. And yet instead, he just wants to rule by decree. That threatens everyone's liberty.