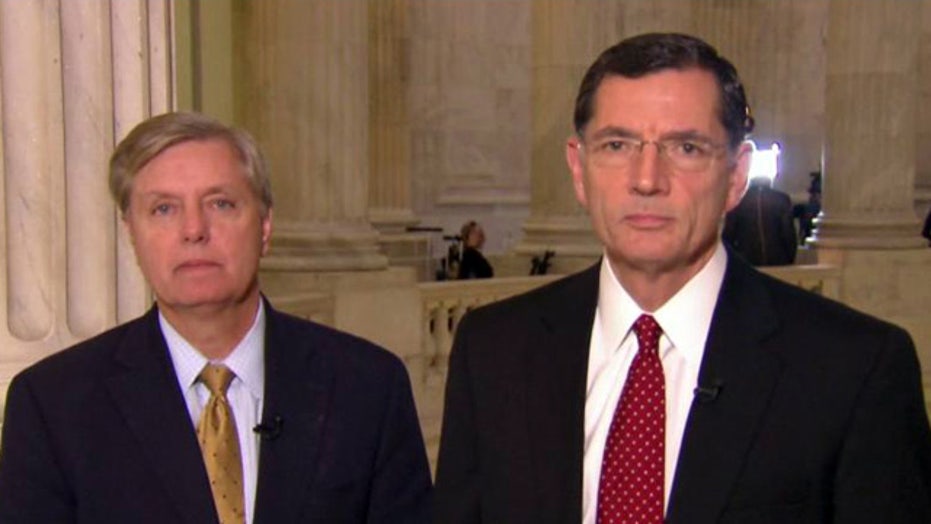 Will a compromise on ObamaCare solve the budget fight?

Sens. Graham, Barrasso react to the chaos on Capitol Hill

This is a rush transcript from "Hannity," September 30, 2013. This copy may not be in its final form and may be updated.

SEAN HANNITY, HOST: And also joining me now from our nation's capital, senators Lindsey Graham and John Barrasso. Guys, good to see you.

Senator Graham, let me see if I understand this. The president will talk to Syria, Iran, Vladimir Putin but he won't talk to members of the House of Representatives or the U.S. Senate. Do I have that right?

SEN. LINDSEY GRAHAM, R-S.C.: Yes. But it's an unsustainable position over time but yes, you got it right.

SEN. JOHN BARRASSO, R-WO.: Well, the House is doing something that is reasonable and fair tonight. They voted to keep the government open as well as to get rid of special privileges. The president has unilaterally said businesses get the employer mandate delayed for a year. As a guy said to me in Levi, Wyoming, "Why does the boss get this special break but the hard-working taxpayer doesn't?"

So, all we're trying to do is, number one, make sure that workers get the same one-year delay as the boss' have gotten. And two, eliminate this special deal for members of Congress and the White House -- that again the president, the president unilaterally has granted. And I don't think he has a right to do it. We need to get rid of that.

HANNITY: Well, the president amended this bill now on his own unilaterally 14 times. Do both of you agree at this point after the House has now attempted to do this three times and they have been negotiating with themselves, do you both agree that maybe it's time to stop negotiating with themselves and wait for the president and maybe Harry Reid to come to the table?

BARRASSO: Well, I think that the p

GRAHAM: Yes. If I could just add, Sean, they made a political decision, I think, a couple of days ago to allow the government to shutdown, not accept any compromise from the House. And the word is compromise. The House has gone a long way from defunding ObamaCare to a one-year delay to including every member of Congress intercept under the program. I think the House has been very responsible.

But tomorrow, the exchanges are open for business. Every American will have to sign up for the exchanges where available. We will survive the shutdown as a party. The Democratic Party will not survive the effects of Obamacare. So, tomorrow is a big day. It will hurt us in the short term as a party. But it's going to kill the Democratic Party because tomorrow Obamacare starts in earnest.

HANNITY: All right. We have shutdown the government 17 times. It's not like this is unprecedented.

HANNITY: And believe it or not, we actually do survive. Life goes on. Eventually something will happen.

But, you know, the president made a big deal of saying that this is the law of the land, and basically saying he's elected. Don't we repeal bad laws all the time? I mean, isn't it common practice? You know, the president was elected, yes. But so was the Congress. And don't we have a system of checks and balances and separation of power. Isn't it Congress that has the power of the purse?

GRAHAM: The one thing we know, Sean, is the unions are telling the president, your law has destroyed the 40-hour work week. How many Americans now have 25 hours of work because the employer couldn't afford the expense of the mandates in ObamaCare? This law is really bad for job creators. It's hurting the people, it was intended to help. And over time we are going to win this. Beginning tomorrow, people will understand what ObamaCare is all about. You're going to wake up tomorrow and you will going to have to pay a lot more for health care than you did yesterday. And people are going to have buyer's remorse. We will win this overtime.

BARRASSO: And with the exchange, I would say buyer beware.

BARRASSO: Remember, the president promised that it would be the cost of a monthly cell phone bill. Well, that's $71. He said it would be as easy to do as shopping on Amazon. That's not going to happen. And remember, Sean, he said "and you get to keep your doctor." We know that that's going to be a real challenge under these exchanges.

HANNITY: We have been covering this in all detail. Their ten states now where ObamaCare is literally wiping out existing health care plans. You got a $10,000 swing. There is not a $2,500 savings per family, it's a $7,500 increase for a family of four, and as you both pointed out, the CBO also said it will bankrupt us and part-time employment will skyrocket.

Let me ask, both of you did not support Ted Cruz in his effort last week. Why? Senator Graham?

GRAHAM: Well, I thought it was a tactical decision that frankly I couldn't support. The idea of defunding ObamaCare and attacking ObamaCare at every turn makes sense to me, pointing out its flaws. But the idea that we're going to get the president to give up on his signature issue, if we shut the government down, I didn't think you could get there from here. So, it's a tactical decision I didn't support.

But trust me. Over time, ObamaCare is going to fall of its own weight because it is a bad law and the public, over time, is going to tell Democrats to sit down and start over.

HANNITY: What time do you expect this vote to take place tonight, Senator Barrasso?

BARRASSO: It's going to be at 9:15. I would ask all your viewers to stay tuned. You may want to put a box down in the corner of the screen. We are heading right now to the Senate floor to vote. Actually, we are going to vote for it. And, you know, responsible Democrats ought to join us in voting to give a one-year extension on the individual mandate and they ought to get rid of the special deal for members of Congress and the White House and their staff.

Sean, watch this Oklahoma lawsuit. There is a lawsuit coming out of Oklahoma it's very clever. Under the law if the states don't set up exchanges, the federal government is not allowed to do so. And a lot of states have not set up state exchanges. So watch the Oklahoma case going to the Supreme Court. There is a lot of litigation yet to be had.