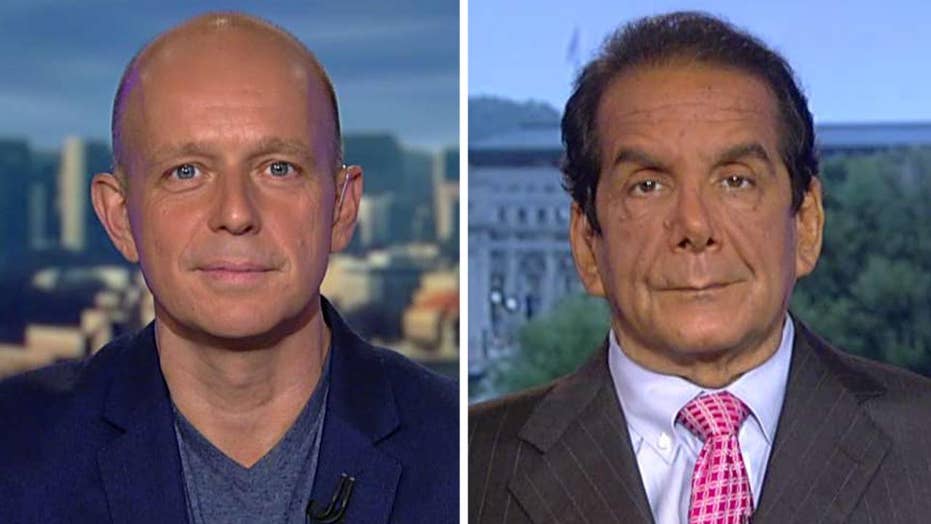 This is a rush transcript from "Special Report with Bret Baier," July 19, 2017. This copy may not be in its final form and may be updated.

PRESIDENT DONALD TRUMP: You can keep your doctor -- lie. You can keep your plan come -- lie. It was a lie directly from the president. For seven years you had an easy route. We'll repeal, we'll replace, and he's never going to sign it. But I am signing it and we should hammer this out and get it done. And not just the repeal.

SENATE MAJORITY LEADER MITCH MCCONNELL, R-KY.: There is a large majority in our conference that want to demonstrate to the American people that they intend to keep the commitment they made in four straight elections to repeal Obamacare. I think we all agree it's better to both repeal and replace. No harm is done by getting on the bill, wide open for amendment.

BRET BAIER, ANCHOR: Well, they are moving forward with the straight repeal now, and the president made a full court press, having all of the GOP senators at the White House for lunch today. This as some new FOX polls came out. Next steps on Obamacare, people saying keep it, make it better, 60 percent in this poll, throw it out and start over, 33 percent. Job approval, job performance approval ticking up one point from May. And disapproval at the same.

And then issues facing the country that are important they are extremely or very concerned about, and you can see health care tops the list right now, 82 percent. The future of the country, 81 percent. And you see the rest there.

With that, let's bring in our panel: Steve Hilton is a former adviser to British Prime Minister David Cameron, he's also the host of "The Next Revolution" right here on Fox News Channel; Amy Walter, national for The Cook Political Report, and syndicated columnist Charles Krauthammer. OK, Amy, today's pitch. I heard some people on other channels saying where was that guy as President Trump was putting the screws to the Senate GOP?

AMY WALTER, COOK POLITICAL REPORT: Where was he throughout this process in selling it, forget about even just trying to get his own members on board, selling it to the public. As we pointed out, right now in the FOX News poll, 60 percent of voters saying the exact opposite of what President Trump is arguing for there, which is to repeal it completely. They are saying actually keep it and make it better. That's not a message that's going through.

The president's overall approval rating on the issue is the lowest of anything that he is doing. He's doing better on the economy than on health care. And so part of the job of being president is making the sell, making the hard sell and making the case. The president didn't do it. There were no members in the Senate that did it.

When I turned on the television, the only senators that were on television were ones who were saying the problems they had with it. And then when it came to the actual advertising that voters get to see on their television sets, I looked from the end of May to the middle of July, about $6 million had been spent on advertising focused on this health care bill, $5.8 million of it was negative and told the senators to vote against it. Nobody was promoting this bill.

BAIER: What about this move, having this lunch? You had Senator Dean Heller positioned right next to the president. He's from Nevada. One of the concerns that people had about the votes there, and the president directly addressed those concerns with Heller next to him.

TRUMP: We are very close. The other night I was very surprised when I heard a couple of my friends, my friends, they really were and are -- they might not be very much longer, but --

TRUMP: I think I have to get them back. You didn't go out there. This is the one we were worried about. You weren't there, but you're going to be. You are going to be.

TRUMP: Look, he wants to remain a senator, doesn't he? And I think the people of your state, which I know very well, I think they are going to appreciate what you hopefully will do.

BAIER: The hard sell there, Steve.

STEVE HILTON, FOX NEWS: That was fun. It's the version of Trump I think that people respond well to and they like him.

But to be completely honest, I think this day-to-day story is actually really beside the point. I think the most relevant thing that we've heard in this whole discussion was what Boehner said in that speech earlier where he said in 25 years he was in Congress he didn't see any moment when the Republicans agreed on what to do about health care. I think the biggest story here in all the talk of is the bill collapsing or not, is Obamacare collapsing or not, I think the real question is, actually, is the Republican Party collapsing? Because if they can't do something like this, if the gap between the moderates, the conservatives and then let's not forget the populists, the new populist wing, just so big that they can't get anything done, then there really are questions. "The Wall Street Journal" wrote about what is the point of the party? I think if they don't get to the economic measures that was the number one reason President Trump was elected, tax reform, infrastructure, something to boost jobs and incomes, if they don't do that this year, then you are really going to see genuine revolt in the primaries next year against the Republican Party, and it could succeed.

BAIER: There is one caucus up on Capitol Hill on the House side that agrees with you a lot. Here's Congressman Meadows.

REP. MARK MEADOWS, R-N.C.: We understand that we have reached potentially an impasse. I'm still hopeful that they will come up with some kind of agreement in the next 72 hours, 120 hours, where we can ultimately put this to rest for the American people. But if not, we should put on President Trump's desk what we put on President Obama's desk. We should demand no less.

CHARLES KRAUTHAMMER, SYNDICATED COLUMNIST: Look, I think the chances of a resurrection here are rather small. If it succeeded, it would be the most spectacular since Lazarus. And I'm not sure that these people have divine powers. The problem is that they chose an issue on which inherently there are huge divisions among Republicans. And I don't think it questions the very existence or even the value of the party. They made a strategic error in doing this, and in part it was for tactical reasons. They wanted to get health care reform so they could have a new, a better bottom line to work with in doing tax reform. So it was kind of an inside baseball parliamentary maneuver.

They ran into the problem that after seven years, what they were united on seven years ago was different because people had become accustomed to the new entitlement and that's why they are split. I think they have a good chance of working out something on tax reform. That's their strength. That's what I would have recommended they start with. I think the best thing to do now, ironically, is walk away. I think it's going to be suicidal to go ahead with the vote next week. It's going to be a repudiation. It's going to be a vote to proceed, meaning that the Republicans who vote against it, and there will be enough, I think, to shoot it down, are saying we are done with this this. Well, you don't have to have it officially on the record. Just walk away and go immediately to something, perhaps even radical on tax reform.

WALTER: That, though, I think is the other problem, Charles, is that there's not any indication that these issues are going to be easier, that the divisions and ideological fights that we're having on tax reform are going to come to bear. So the question is, how radical do you get? Do you just say, to paper over a lot of the big, major differences, we're going to do something just a little bit smaller, not as expansive as we had hoped, but at least put some wins on the board.

BAIER: There is some anecdotal talk from outside groups and the Hill dealing with the administration that they have their ducks in a row at least much better than they did on the health care rollout, and that this mid-August rollout on tax reform is going to look a lot different and a lot more mature, if you will, on the legislative side.

HILTON: And it will be where the president actually has a point of view, and that's a good place to start, which he didn't have with health care.

WALTER: And where he was ideologically not in step with many of the folks within his own party. He campaigned against doing many of the things that the bill proposed to do.

BAIER: And obviously we are going to have many panel discussions about how they get the revenue that they didn't get out of health care and they pay for everything, and we're going to go down that road in the weeds many times.

I want to touch briefly on this other story today. "The Washington Post" had this headline "Trump had undisclosed hour-long meeting with Putin at the G-20." There was a lot of reporting. Wendy Sherman, formerly with the State Department had this to say about it on MSNBC.

WENDY SHERMAN, FORMER UNDERSECRETARY OF STATE: The only translator was the Russian translator. So quite frankly, President Trump doesn't really know what went on in that meeting because whatever he said got translated by that translator, and that translator's life is some ways is on the line. He is President Putin's guy. This is gravely concerning.

BAIER: Now here is the dinner table. There's the position, President Trump, Vladimir Putin on the other side, Melania Trump next to President Putin at some point in the dinner. Now, this is with the other 18 G-20 leaders and their wives, he goes around and sits next to Putin. We don't know, Steve, how long this meeting really lasted. It could be up to an hour. President Trump tweets "Fake news story of secret dinner with Putin is "sick." All G-20 leaders and spouses were invited by the chancellor of Germany. Press knew!" What do you make of this ordeal?

HILTON: I will take it seriously in a moment. But there you have the authentic voice, Wendy Sherman, of the official bureaucracy. How dare the principals actually have a conversation where we don't control, that civil servants haven't managed and set up in advance? This criticism, I think, just reveals the shallowness and superficiality of the critics. What they are really upset about is the style, how things are done, whether protocol was kept.

Actually, I'm sure President Obama did all the right things, took all the right translators along, but look at the results of his relationship with Putin. It was that relationship that emboldened Putin to invade Ukraine because he knew Obama wouldn't do anything about it. So that's what we should be focused on. What's the outcome from these kinds of relationships. And since it was all done right before and ended with a bad outcome, maybe doing it differently might produce a different result.