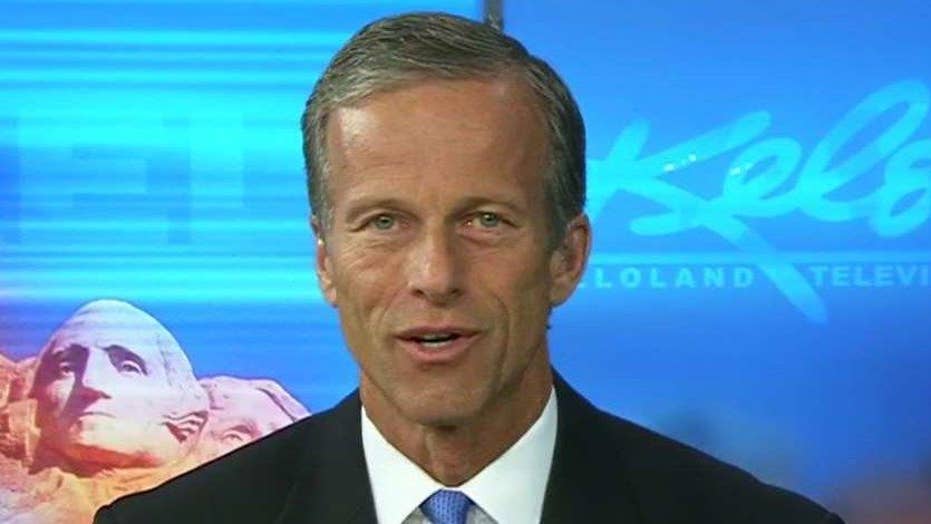 TRISH REGAN, "YOUR WORLD" GUEST HOST: All right, everyone, by now, you have heard critics calling to ditch Mitch over this:

SEN. MITCH MCCONNELL, R-KY, MAJORITY LEADER: Now, our new president has of course not been in this line of work before, and I think had excessive expectations about how quickly things happen.

Good to see you, Senator.

REGAN: Do you think the president has excessive expectations of Congress?

THUNE: Well, I think that the Congress and the president need to work together. We have a lot to get done. And the only way that happens is if we can be partners.

And so these sort of public airing of grievances, I don't think, are helpful. And I think it's just important that if there are misunderstandings or discussions that you want to have, that have those offline, have them within the family, but let's focus on a common agenda.

REGAN: So, was Mitch McConnell wrong to say that publicly, what he said?

THUNE: I think Mitch McConnell was just -- that was just he was talking to a group and he was sort of describing, I think, the state of play in Washington.

And I don't think there was any -- particularly anything that was newsworthy in what he said. And so I just think that the -- the president needs to take that in strike. We obviously need to take some of the president's comments in stride and realize that the only way we get accomplishments for the American people is if we work effectively together.

REGAN: But, Senator, people are getting kind of frustrated, because they feel like you guys haven't been able to accomplish much. They sent you there. And the hope was, the thinking was the first thing you were going to do was repeal and replace ObamaCare, and then you would work on tax reform and maybe infrastructure and a few other things.

But the number one thing on your agenda thus far has failed.

But tax reform is something that is critical to our economic agenda. And we need to do it to get greater growth in the economy, better-paying jobs and higher wages. So, we're going to do these things.

And, ultimately, you're not measured by the success of any Congress until you get to the end of the Congress. And we're into -- early into this administration, into this term. You're right. We have a lot of work to do. We realize that.

REGAN: So, the president was wrong?

THUNE: And that is going to require a level of cooperation and partnership that I think we need to see more of.

REGAN: Was the president wrong, then, in your view, to call out Mitch McConnell on his comments?

THUNE: Well, I think that the president is -- it's -- I just don't think that is helpful, frankly.

If he needs to talk to Senator McConnell, pick up the phone and call him. But airing it, as I said, in a public way like that, I don't think is -- serves anybody's interests very well.

And, in the end, it's all about getting things done for the American people. And for that to happen, Congress needs the president, and the president needs the Congress.

REGAN: Senator, to just jump in, I would point out that he did. The president did call Mitch McConnell. And he gave him quite an earful.

But yet you haven't seen Republicans on board with this president's agenda in a way that is able to get anything done. So, he did make that call.

THUNE: Well, all the action on health care to date has happened in the Congress. Obviously, we have -- Congress is responsible for trying to move legislation. And, ultimately, the American people are going to hold us accountable for whether or not we're successful in doing that.

But the fact that it hasn't happened as quickly as some had hoped for is sort of I guess water under the bridge. Right now, the focus is working with this president, working with this Congress to reform our tax code, to create better-paying jobs and higher wages, to rescue people from a failing ObamaCare system, to pass infrastructure legislation that will be good for our country's economy and for jobs.

And those things remain to be done.

THUNE: And I'm hopeful that, before this session of Congress is over with, that we will see -- we will be able to put some points on the board, which will mean that's good news for the American people.

THUNE: Right. They should. And you're absolutely right, Trish.

And I'm not -- I will be the first to say that, again, I think that the Congress and the president together are going to be held accountable for what we're able to get done.

And, oftentimes, there are things getting done that don't get written about, that the media doesn't cover. But in terms of the big-ticket agenda items, we have got a lot of work ahead of us. But that work doesn't get done any more quickly or easier when you have public disputes.

I think you're going to have differences, like any family does. But to the degree that you can keep those within the family, I think we're all going to be better off.

REGAN: Thank you very much, Senator. Good to see you.

THUNE: Always good to see you. Thanks, Trish.