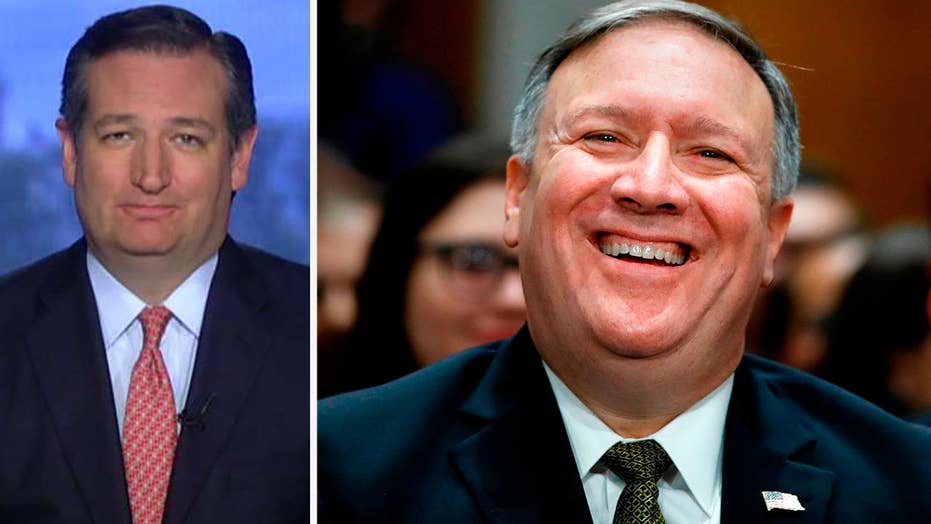 Republican senator from Texas weighs in on vote for Mike Pompeo as the next secretary of state and offers insight on next steps for NAFTA.

This is a rush transcript from "Your World," April 23, 2018. This copy may not be in its final form and may be updated.

MARIA BARTIROMO, FOX NEWS HOST: We are watching this as well today. The Senate Foreign Relations Committee is set to vote on the nomination of Mike Pompeo as secretary of state in about an hour from right now.

Democrats on the committee are vowing to block this. Senator Rand Paul, for one, on the Republican said has also come out against Pompeo.

Good to see you, Senator. Thanks very much for joining us.

SEN. TED CRUZ, R—TEXAS: Maria, great to be with you. Thanks for having me.

BARTIROMO: Well, we know a number of the people on this committee have backed Pompeo in the past. What is your take on what is taking place this morning in Washington?

CRUZ: Well, to the surprise of nobody, we're seeing a lot of politics in Washington.

The vote is expected later this afternoon. And there's a good chance that every Democrat will vote in a party-line vote against Mr. Pompeo. If they do that, that would be unfortunate.

Just over a year ago, the Senate confirmed Mike Pompeo to be CIA director. He got 66 votes. He had 14 Democrats vote to confirm him. This is a man who graduated first in his class from West Point, who has served this nation and who has been the CIA director.

And, as we look at this attack in Toronto -- we obviously don't know the details yet -- but it underscores what a dangerous world we're in. And we need a strong secretary of state in place. And so I hope the Democrats don't play politics with national security appointments, but instead confirm Mike Pompeo to this position.

BARTIROMO: Well, it looks like they are playing politics, actually, senator. So what to do now?

What is your expectation in terms of a broader full Senate vote for Mike Pompeo? Where does this go?

He may be voted down on committee, but the Senate rules allow the full Senate to take up a nomination, even if the committee votes with a negative recommendation. So, I believe we will take up Mike Pompeo on the floor of the Senate.

And I'm hopeful and I`m confident we will get the votes to confirm him. I think Mike Pompeo will make a very strong secretary of state. This is a perilous time across the world. We need a strong, steady hand as secretary of state, and in particular we need a secretary of state who understands the threats posed by the nation of Iran and the dangers of a nuclear Iran.

Mike Pompeo is someone I have worked very closely with over the years in dealing with Iran and in using American diplomacy and economic sanctions and the full force and power of the United States to prevent Iran from ever getting a nuclear weapon and using that weapon against Americans or against our allies.

So, then we assume, then, that given the chance, that you will vote for Mike Pompeo, then, obviously?

CRUZ: Yes, I will be voting to confirm him.

CRUZ: And I hope my fellow senators do the same.

BARTIROMO: Senator, let me switch gears, ask you about NAFTA.

BARTIROMO: The president just tweeted this out this afternoon: 'The North American Free Trade Agreement, Mexico, whose laws on immigration are very tough, must stop people from going through Mexico and into the United States. We may make this condition -- a condition of the new NAFTA agreement. Our country cannot accept what is happening. Also, we must get the wall funding fast.'

Do you agree with this, putting -- tying Mexican immigration control to a NAFTA deal?

CRUZ: Well, there's no doubt we need to do more on border security. And we need to get Mexico's cooperation, in particular helping secure their southern border.

But let me also say, NAFTA is critically, critically important to Texas and to the entire country. And what I have urged the president throughout NAFTA renegotiation is, use this as a vehicle to further expand our access to the Mexican markets, to the Canadian markets, to expand international trade.

Don't use this as a vehicle to erect barriers to our markets and constrict trade. And I think, if we're expanding access to Mexican Americans, especially, by the way, energy -- the greatest opportunity on NAFTA renegotiation is opening up access to the Mexican energy markets, which will produce thousands of high-paying jobs in Mexico and thousands of high- paying jobs right here in the U.S. of A.

Mike Pence, the vice president, said recently that we're getting close on a new deal for NAFTA.

I know that we have got the Mexican elections coming up this summer.

BARTIROMO: Is it even feasible to expect a new deal before those elections, senator?

CRUZ: Look, I hope so. A lot of us are worried about the rise of the extreme left in Mexico. And we don't want to see an anti-American socialist like a Hugo Chavez or Maduro on our southern border. We hope that doesn't happen. That would be bad for Mexico and bad for America.

When it comes to NAFTA, another thing that I have urged the president and urged the administration to do is use NAFTA renegotiation to enact regulatory reform, and in particular to codify the REINS Act.

The REINS Act would provide that any economic regulation that imposes $100 million or more of cost on the economy can't go into the effect without an affirmative up/down vote from Congress. If enacted, it would be the most significant, far-reaching structural reg reform ever passed.

And if they attach it to NAFTA, then, under trade promotion authority, it goes straight to the Senate for an up/down vote at 50 votes, and the Democrats can't filibuster it.

So it`s good for the economy. It's good for jobs. It would be a tremendous step for our country.

BARTIROMO: It would be a big positive, for sure, no doubt about it.

BARTIROMO: Markets would see it that way as well.

And then there`s this. You`re on the Senate Judiciary Committee.

Here's what Devin Nunes told me this weekend, chairman of the House Intel Committee. Sir, listen to this.

REP. DEVIN NUNES, R—CALIF.: We have long wanted to know, well, what intelligence did you have that actually led to this investigation? So what we found now, after the investigators have reviewed it, is that in fact there was no intelligence.

BARTIROMO: Senator, no intelligence used to launch an investigation into the Trump campaign, which launched a special counsel. Your thoughts.

CRUZ: Well, listen, there's multiple ongoing investigations in both houses of Congress. And, you know, my view, I share the concern a lot of people have that the Department of Justice, the special counsel should not become a partisan fishing expedition.

Listen, I think it's very troubling that Bob Mueller has appointed a number of lawyers to his team who are partisan Democrats who have repeatedly been Democratic donors. In my view, the Department of Justice and the FBI, they should be beyond reproach.

And I'm concerned about it. And I know millions of Americans are, too.

BARTIROMO: Well, it's an abuse of power, isn't it, sir?

CRUZ: It -- we will see what the special counsel does.

CRUZ: But they should not go down the road of a partisan fishing investigation.

And already the scope of what they`re examining seems to have little to nothing to do with Russia.

CRUZ: The whole notion of Russian collusion seems to have been left in the rear-view mirror. And that's -- that's the reason why special counsels and independent counsels are such a bad idea, why in the past they have been abused over and over again.

They become like Javert in 'Les Mis,' where you have a prosecutor just seeking to bring charges, regardless of the underlying facts. And that`s troubling.

BARTIROMO: Well, that's what happens when you launch an investigation on zero intelligence.

BARTIROMO: Senator, it's good to see you, sir. Thanks very much.

We will see you soon, Ted Cruz.