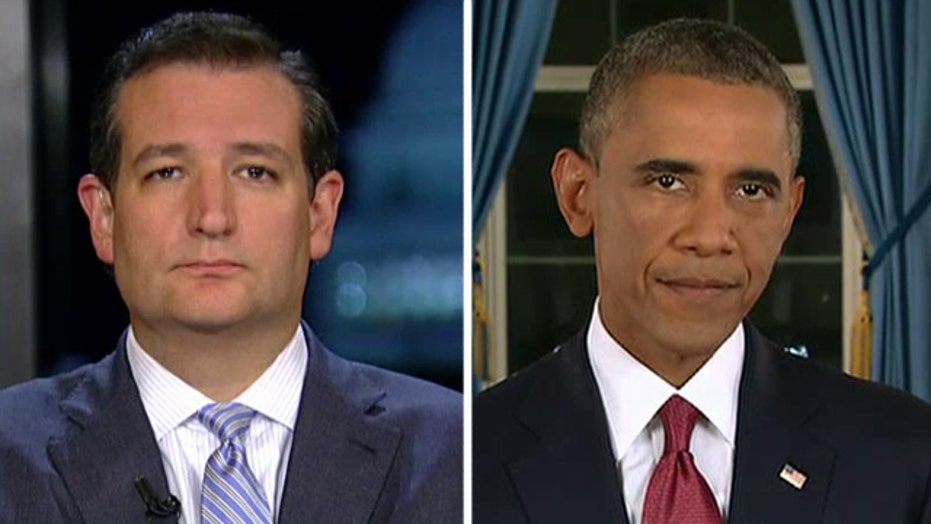 Lawmaker breaks down the presidential address

This is a rush transcript from "The Kelly File," September 10, 2014. This copy may not be in its final form and may be updated.

MEGYN KELLY, HOST: Well, one of the moments getting the most attention tonight, President Obama calling ISIS a terrorist group and talking about its connection to Islam. Listen.

PRESIDENT BARACK OBAMA: Now, let's make two things clear. ISIL is not Islamic. No religion condones the killing of innocents. And the vast majority of ISIL's victims have been Muslim. And ISIL is certainly not a state.

KELLY: Joining us now with reaction, Republican Senator of Texas Ted Cruz. Senator, good to see you tonight. Your thoughts on that comment on the president's remarks tonight.

SEN. TED CRUZ, R-TEXAS: Well, I thought the remarks tonight continued the president's approach to this crisis, which is they were fundamentally unserious. If you look at the first portion of the president's remarks tonight, they were devoted to a defense of the failed Obama/Clinton foreign policy, the policy that has featured the United States leading from behind as he put it and has led to most of the world being on fire. He then sought to diminish the threat of ISIS to suggest that they're primarily a regional threat.

And what we didn't see tonight was a commander-in-chief focused on U.S. national security interests who stood up and said, "There are radical Islamic terrorist who have declared war on the United States, who are murdering Christians, who had murdered two American journalists and who have promised to take jihad to America, and we will respond with overwhelming air force to take them out."

Instead, he suggested targeted attacks and focuses, frankly, on political issues that are peripheral from the central question of how we protect America from those who would take jihad to our nation.

KELLY: But how -- what more would you have him do? Speak to a greater air power, to more airstrikes -- I mean, he didn't outline the number of airstrikes we're going to unleash, the timing, et cetera. That remains to be seen in the days and weeks ahead.

KELLY: But does the American public have the appetite for combat boots on the ground in Syria?

And so, that example -- the Obama/Clinton foreign policy has been characterized by photo op foreign policy, by focusing on a press release. And so, to date, there have been some air attacks, there's been a missile here or bomb there. What has been missing is a concrete military objective to eliminate ISIS, to take them out because they have become qualitatively more dangerous. They has seized substantial portions of Iraq, gaining a nation state with billions of dollars of oil revenue that gives them the ability to project terror and to murder us here at home...

KELLY: That is something Al Qaeda's never had before.

KELLY: They'd never had a territory that they control as a base from which to launch their operations. I mean, they had pockets of Afghanistan but now they have their own nation. I want to you why you keep calling it the Obama/Clinton policy. I assume you're referring to Hillary Clinton. But in her defense, senator, she along with our then-Defense Secretary Leon Panetta and the Chairman of Joint Chiefs Dempsey, were pushing President Obama to arm those Syrian opposition rebels years ago. And the president declined to do it. She wrote about it in her book saying, "I pushed as hard as I could but in the end, as Harry Truman said, the buck stopped with the president. There was only so much I could do."

CRUZ: The reason I call it the Obama/Clinton foreign policy is that they are intertwined. She was his secretary of state. She was in charged with implementing the strategy of, quote, "leading from behind," which in effect featured the United States withdrawing from leadership in the world and it created a vacuum into which these players have stepped. You know, the idea of our supporting the rebels in Syria -- among those rebels with ISIS.

I mean, one of the more incoherent aspects of the president's speech tonight was when he suggested that we should be -- that the answer here is to arm rebels in Syria now. Look, ISIS is fighting against Assad. The rebels in Syria are fighting against Assad. And for the past over a year the president has suggested no sensible way to distinguish between radical Islamic terrorists like ISIS, like al-Nusra that are fighting in Syria, and the other so-called moderates. It doesn't make sense.

And, Megyn, it's reminiscent of another aspect of his speech where he said that our acting against ISIS effectively is dependent upon political reconciliation in Iraq. Listen, the Sunnis and Shiites have been engaged in a religious sectarian civil war since 632 A.D.

KELLY: But wait, let me interrupt you so we can set the stage for the viewers, because this appears to be the White House's justification for the perceived delay in getting at this, that the president has been thoughtful, he's been deliberative and what he didn't want to do was make a move militarily before the Iraqi government was sure enough, the leadership replaced and the government in place so that they could support whatever gains we make instead of having somebody like Maliki over there who is largely responsible for the deterioration we've seen in the past few years.

CRUZ: Listen, I agree that Maliki was an ineffective leader. He was a leader that systematically repressed his people. And some of that he did because America receded from leadership and left him alone to do that. It was because President Obama squandered the gains that so many men and women in the military bled and died to accomplish.

But at the end of the day, repeatedly, President Obama and Hillary Clinton and John Kerry focus on peripheral political goals such as, can we get the Sunnis and Shiites to come together and reconcile since the death of Mohammed in 632 A.D. they have been battling. And it is...

KELLY: It's a tough charge.

Let me ask you this because the president did make a reference to Congress tonight, saying he doesn't need your approval to do this but we're stronger if he has it. You know, a few years ago, Senator Bob Menendez, a Democrat in New Jersey tried to push through a bill that would arm the Syrian opposition. Harry Reid did not allow that to come to the floor for a vote.

So the question tonight is, will Congress unite behind the new plan and do you think they need to?

CRUZ: Well, I think the president should come to Congress and ask for authorization. You want a demonstration of presidential hubris, look, no further than this speech tonight where he brazenly declares, "I have the authority to wage war regardless of what Congress says." You know, my copy of the Constitution says Congress has the authority to declare war.

Part of the reason for seeking congressional approval, is it forces the president to go in front of Congress and the American people and articulate a clear military objective that furthers U.S. national security interests. The president has failed to do so. And it appears he still doesn't intend to do so.

KELLY: Senator Ted Cruz, thanks for being here, sir.