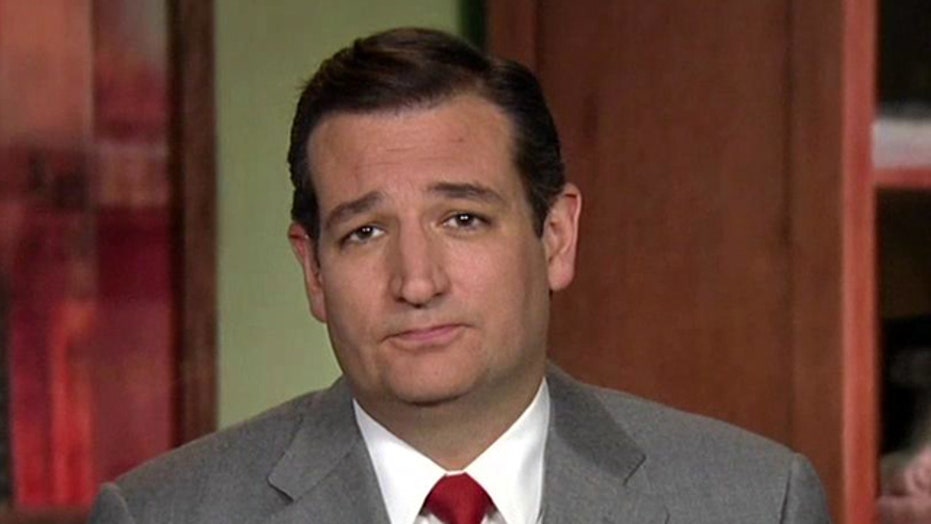 This is a rush transcript from "Hannity" November 20, 2013. This copy may not be in its final form and may be updated.

SEAN HANNITY, HOST: Welcome to "Hannity." Now, in just a moment, breaking news about a second wave of insurance cancellations that are looming. So will they impact you? Senator Ted Cruz is standing by. He'll have reaction.

But first, another day, another devastating poll indicating that the end of Obama mania is now finally upon us. Now, we knew this day would come. We just didn't know how badly the country would be damaged before it all happened.

According to a newly released CBS News poll, President Obama's approval rating has now plummeted to 37 percent. Now, this is a nine-point drop just from last month. And when asked what should happen to ObamaCare, only 7 percent of those polled said it should be kept as it is, 48 percent said some changes were needed, and a staggering 43 percent said the law should be repealed.

But it isn't just hard-working taxpayers who are losing faith in the president. So are members of his own party. According to a report in The Hill newspaper, quote, "Sources who attended a meeting of House chiefs of staff on Monday say the room was seething with anger over the immense damage being done to the Democratic Party, and there was talk of scrapping rollout events for the Affordable Care Act. One chief of staff ranted, quote, 'Here we are, we're supposed to be selling this to people, and it's all screwed up. This either gets fixed or this could be the demise of the Democratic Party. It's probably the worst I've ever seen it.' The aide said of the recent mood on Capitol Hill, 'It is bad, it is really bad.'" Now, the, quote, "demise" of the Democratic Party very strong words.

Now, also breaking tonight, according to FoxNews.com, a new and independent analysis conducted by the American Enterprise Institute warns of a ticking timebomb, predicting a second wave of 50 million to 100 million insurance policy cancellations. Now, that would come next fall right before the mid-term elections. Now, the next round of cancellations and premium hikes is expected to hit employees particularly of small businesses.

We go now to Washington, where Texas senator Ted Cruz is standing by tonight with reaction. Senator, this is not the only prediction. The Manhattan Institute, many analysts that we've interviewed on this program all saying the same thing. This is going to keep rolling out for many months, cancellation letter after cancellation letter, rate shock after rate shock. What is the long-term impact to all this?

SEN. TED CRUZ, R-TEXAS: Now, Sean, you're exactly right. ObamaCare is a disaster. It is hurting millions of people all across this country. Sadly, all of the concerns of the millions of Americans who spoke up for months are coming true and proving even worse than was feared.

We're seeing millions of people who've lost their jobs or were forced into part-time work, and over five million people have already had their health insurance canceled because of ObamaCare.

And as you noted, the there are more shoes getting ready to drop. One of the next shoes that's going to drop is more and more Americans are going to discover that they can't see their doctors. You know, Texas Oncology, one of the largest oncology centers in Texas, has just announced it's not going to participate in ObamaCare.

This thing is not working, and it's time to start over.

What -- what does that mean? How should the American people interpret that in light of most people don't see the president as honest and trustworthy anymore?

And that's -- if they had been honest about that trade-off, if the president had said to cover 15, 16, 17 million people, we're going to mess up the insurance for 200 million Americans, he would have been laughed at. Nobody would have gone down this road. And that's the reason why they instead decided to make a promise, to willfully make a promise that they knew was false.

HANNITY: It's an ominous sign when a government spends hundreds of millions of dollars and has three years to prepare a website and the way this has been rolled out. Yesterday in Miami, Kathleen Sebelius -- you know, she -- a woman was trying to sign up for ObamaCare. And let's show everybody what happened in this instance.

UNIDENTIFIED FEMALE: I think it's great that this is happening.

REPORTER: The screen says, "Sorry, our system is temporarily down."

SEBELIUS: It's OK. It'll come back. That happens every day.

HANNITY: Look at that screen shot. It says, "Sorry, our system is temporarily down." Now we're being told, Senator, that they may not even meet the deadline of the end of the month! So what happens then? Isn't there a series of events? Don't they need individuals to sign up for this whole thing to work?

CRUZ: There is. And Sean, we knew about the problems inherent in ObamaCare that it was going to take away people's health insurance, drive up premiums, kill jobs. What we didn't predict was the disastrous incompetence of the administration rolling out a functioning Web site. You know, there are 17-year-olds that can design a Web site and sell sneakers on line, but apparently, this administration, despite having three years, can't get a functional website.

And what that has functioned as is basically an accelerant. It's throwing gasoline on the fires. It has made all of these problems far more severe, far more quickly. And you know, at this point, I'm convinced it is the essence of pragmatism to stop ObamaCare and to stop over (ph). Three-and-a-half years ago, it might have been that reasonable minds can differ, that perhaps some could have thought maybe ObamaCare might work. You and I didn't think so, but perhaps others could have.

Today, nobody's making that argument! Today, you can't look at this disaster, at millions of people losing their health insurance, losing their jobs, forced into part-time work, and conclude anything other than this isn't working. And so the pragmatic, common sense result of that is to say, It's not working. Let's start over.

HANNITY: I agree with you. Now, it's very interesting that when you were in the middle of your 21-hour, 19-minute -- not filibuster but speech on the Senate floor, you had a lot of critics, and some were even within the Republican Party.

One of them was John McCain that said any issue to delay or repeal or replace or even delay this was irrational, another point called you a "wacko-bird." He was on with Greta on November the 13th, and now he's sounding a little bit like Ted Cruz, in my opinion. I want to get your reaction to this.

SEN. JOHN MCCAIN, R-ARIZ.: Let people go across state lines to -- in order to -- if they can get a better insurance policy in another state. And remove this whole tax incentive for employers to provide employees health insurance.

MCCAIN: That's right. That's exactly right. That is total repeal in every other way because what ObamaCare is, is an experiment in social engineering.

HANNITY: He said elections have consequences. It's irrational. What's your reaction to that, considering he more than anybody else was firing away at you at the time?

HANNITY: You agree with John McCain now, but not then.

CRUZ: But you know, the great thing is success has 1,000 fathers, failure is an orphan. I am happy for everyone in the Republican Party who wants to claim success and parentage for us coming together and repealing ObamaCare because it isn't working.

And the more who come together, the better chance we are going to have of actually successfully empowering the American people. You know, if you want to expand health insurance, the way you do it is you want more choices and you want lower costs. What ObamaCare does is it provides fewer choices and higher costs. And so it's great that we're seeing so many people...

HANNITY: Let me ask this...

HANNITY: All right, so CBS has the president at 37 percent. I mean, they're almost near Nixon numbers in terms of approval rating. In the ABC/Washington Post poll, on three measures of leadership and empathy, in that particular poll, he's underwater for the first time in his presidency. People don't see him as a strong leader. They don't see him as somebody that understands people like them. And they don't view him as honest and trustworthy.

So with that in mind, is it possible as you now move forward, in your opinion, that this really can be repealed, that this can really be stopped? And how would you go about doing that?

CRUZ: Well, I believe that's the only answer. You're seeing President Obama and the Democrats propose Band-Aid fixes that are cosmetic. Some of them have great names, like, If you like your plan, you can really, really, really keep it.

CRUZ: But they wouldn't fix the problem. They wouldn't give real relief to the over five million people who've lost their health insurance plans. And you know, the president apologized, but an apology is only meaningful if you make it right. And the way to make it right is to repeal it all and instead to allow people to buy insurance across state lines, have real choice, real opportunity for patients to control their health care, not the government.

HANNITY: All right, Senator Ted Cruz, always good to see you. Thank you for being with us.