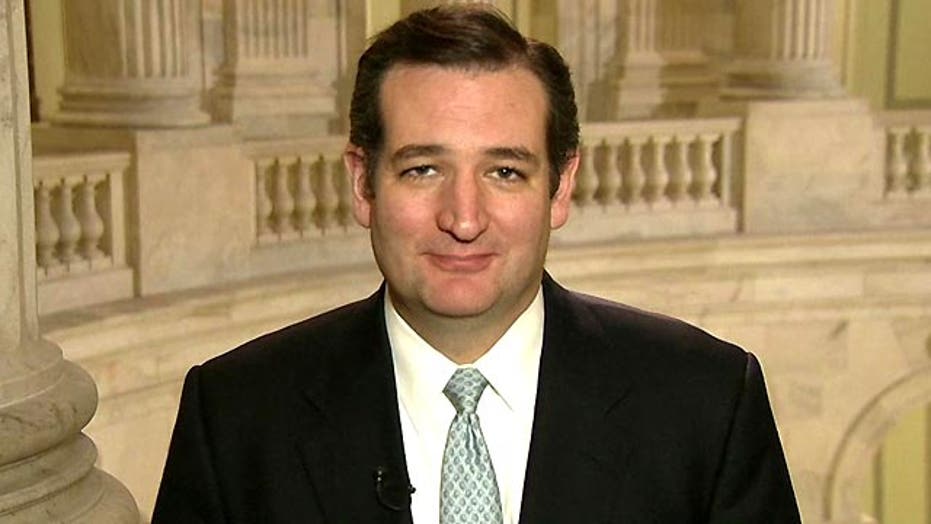 How the agreement increases debt, spending

This is a rush transcript from "Hannity," December 18, 2013. This copy may not be in its final form and may be updated.

SEAN HANNITY, HOST: And in a 64 to 36 vote, the Senate passed the so-called bipartisan budget deal. Nine GOP senators -- who you can see right there on your screen -- they broke ranks. They voted with the Democrats. Take a close look. Lawmakers and Senator John McCain had some very harsh words for his Republican colleagues yesterday on the Senate floor. Here's what he said.

SEN. JOHN MCCAIN, R-ARIZ.: I have concerns about the budget deal. Everybody, I think, does because the nature business is done. But to somehow vote against it without an alternative to keep the budget -- keep the government from shutting down then I think lacks some intellectual integrity.

HANNITY: Really? Senator McCain, Republicans do have solutions. Conservatives do. And in a moment, you'll hear some of them. I hope you're watching. Senator Ted Cruz is going to lay out exactly what they are.

But first tonight, we want you to join the conversation. Log onto our Facebook page. Tell us what you think about the nine GOP senators who sided with Democrats and voted to support the budget deal. And plus, it's time to "Trend at 10." You can sound off on Twitter. @seanhannity on Twitter is my name. And #Hannity over the course of the next hour. And by the way, we'll tell you who won in the big dog contest from last night.

HANNITY: All right, first of all, you voted against it. Why? And then I want you to respond to Senator McCain, your friend, who called you a wacko-bird.

CRUZ: It's a lousy deal. Everyone in this country outside of Washington agrees that we have too much government spending, too much debt and the tax burden is too high.

And what does this deal do? It has yet more spending. It will rack up more debt in the near term in exchange for promised hypothetical cuts in the future, and it has more taxes and fees on the American people.

It goes the wrong direction. And it's yet another example of business as usual in Washington, not addressing the real problems we've got.

HANNITY: I mean, that's the problem. We still have -- increasing the debt, spending comes first and the so-called cuts come in the back years. What about the military? Because they're getting hurt big-time here. And I was surprised to see any Republican vote for that. And you guys tried to fix it yesterday. Democrats wouldn't go along with it.

CRUZ: No, that's exactly right. This budget deal cuts the retirement of every one of our veterans, the men and women who risk their lives protecting our country.

It doesn't do the same, by the way, to civilian retirees in the federal government. So it treats the military worse than the civilian side. I don't know how you can defend it. And yet that was the Democrats' insistence. I think it's bad policy. I think it's a mistake. And it's really unfortunate that this is what Congress has done.

HANNITY: All right, so time and time again, you got the Democrats -- they hold the line. They stick with the president. Even though ObamaCare is so unpopular, even red state senators, Democratic senators -- they're sticking with the president so far.

But yet Republicans -- they're fighting amongst themselves -- John McCain's comments. He's now attacked you personally many times. Why does he keep voting with the Democrats?

CRUZ: Well, I don't know the answer to that. But the first point you made about Democrats sticking together is really striking. I mean, it is as if Harry Reid cracks the whip and 55 of them, like lemmings, go off the cliff. And I'll tell you, I've privately urged a few Democrats, going, you know, "Will none of you ever stand up to Harry Reid? I mean -- I mean, will none of you" -- I mean, to be honest, Sean, I've tried to urge them, "You know what? It's not that hard to buck party leadership. Trust me. It's -- I know this in more than a hypothetical way."

HANNITY: You know, I got to tell you, it seems like Republicans -- you have an ability now to lay out an agenda more than ever before with the president's unpopularity, an election year coming. But we keep hearing, We're going to fight later.

Let me -- let me for you an ad that was released in New Hampshire against Senator Jeanne Shaheen. And I would expect we're going to see ads like this all around the country by the time next November comes around. Tell me what you think of this ad.

SEN. JEANNE SHAHEEN, D-N.H.: You can keep your insurance if you like it. It will increase choices for families. It will promote competition.

UNIDENTIFIED FEMALE: The facts -- more than 20,000 New Hampshire patients have had their coverage canceled, and ObamaCare offers only one insurer on New Hampshire's individual market. So next November, if you like your senator, you can keep her. If you don't, you know what to do.

HANNITY: I think that's a powerful ad. I would expect to see it in a lot of places. Your reaction?

CRUZ: Well, I think that final tag line is really telling. You know, ObamaCare isn't working. And it was sold to the American people under false pretenses. Twenty-eight times, President Obama looked in the TV camera and said, "If you like your health insurance plan, you can keep it, period." And yet when he did so, those were -- that was knowingly, deliberately false.

And in the public arena, when you knowingly, deliberately make false statements to the American people and hurt millions of Americans through foolhardy policy, there are consequences. And Sean, that's why you were speaking out so loudly and have been speaking out so loudly against ObamaCare and it's why so many of us have fought so hard to stop this train wreck of a law because it isn't working. People are losing their health insurance, their doctors, their jobs over and over again. And we got to stop it!

HANNITY: You know, Senator, I'm going to outline in January a list of what I think the conservative solution agenda ought to be. And I hope some people in Washington pay attention to it. I'm going to send it to you personally.

HANNITY: I'd like to see if you agree with some of the stuff I'm putting together.

Let me ask you -- you know, we've got a vicious partisan hack by the name of John Podesta. We know him from the Clinton years pretty well, ran a very liberal think tank, Center for American Progress. Obviously, the president has doubled down by bringing him back to the White House.

Here's what he was quoted in this article in Politico magazine on December 17 saying, quote, "They need to focus on executive action that they're facing a second term against cult worthy of Jonestown in charge of one of the houses of Congress."

Then he had to give an apology later on Twitter, "I apologize to the speaker, whom I've always respected," which I thought was a phony apology. But I interpret that the president's doubled down in terms of combativeness. How do you interpret that?

CRUZ: Well, unfortunately, that's exactly right. This is a president who initially campaigned on hope and change and bringing a new tone to Washington. And unfortunately, the new tone has been nasty partisan politics taken up -- as they say in "Spinal Tap," ours goes to 11. And the nasty partisan politics from this administration really does go to 11.

And -- and you know, it's interesting, the substantive point he made, aside from the insult, which is, Do everything the Obama agenda wants to implement through executive action -- and Sean, one of the things that I know you're very troubled about, I find among the most deeply troubling of this administration, is the pattern of lawlessness, the pattern picking and choosing which laws to follow.

The law mandates that all of these millions of people lose their health insurance because ObamaCare makes their insurance policies illegal, and President Obama holds a press conference where he instructs insurance companies ignore the law.

CRUZ: That's dangerous to the Constitution and our liberty!

HANNITY: If everybody stood with you, we would have won the fight. But they didn't, and that bothers me about the Republican Party. But there's an intramural battle we'll get to. Over Christmas, are you going to give thought to the idea -- I know many of -- are watching and waiting to see if you're thinking about a run for the presidency. Will you give it any thought over Christmas?

HANNITY: Are 100 million people going to lose their insurance in the end?

CRUZ: There is a very real risk of that. And this administration knows that. They consciously engaged in a trade-off, where in order to try to provide insurance to a small segment of our population, they have endangered the health insurance of anywhere between 1 and 200 million Americans. It doesn't make sense!

HANNITY: All right. Good to see you. Happy New Year and merry Christmas, sir. Appreciate it.

CRUZ: Merry Christmas to you, too, and have a blessed new year.