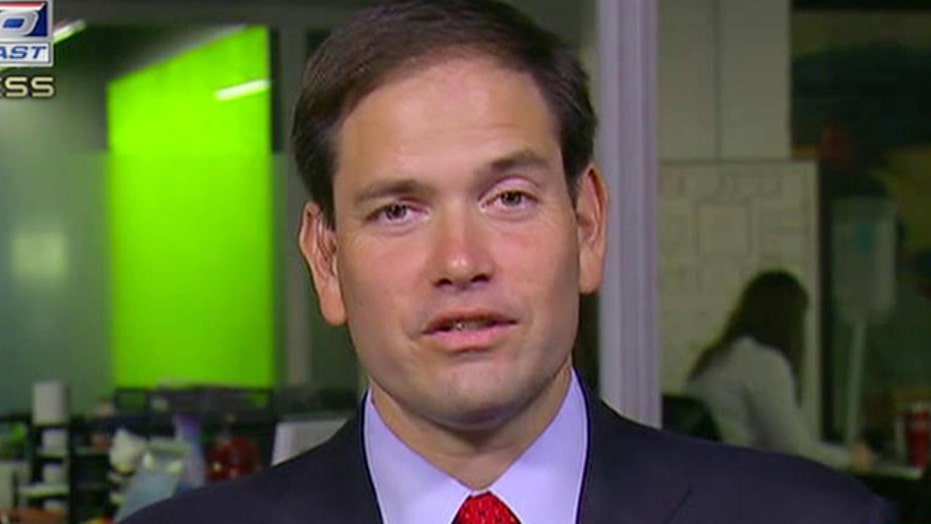 This is a rush transcript from "Your World," July 7, 2015. This copy may not be in its final form and may be updated.

NEIL CAVUTO, HOST: Facing some sudden crosswinds in the polls, Senator Marco Rubio choosing to reset things in the Windy City, offering up an education agenda that is big on technology, not so big on taxes, he says, but the senator very big on telling me afterwards his campaign, well, weather's just fine.

CAVUTO: There's this push that we want to normalize relations with Cuba to drop all remaining sanctions, open embassies in each other's countries.  You've been critical of that and I'm wondering now with this moving along, whether you are concerned that a lot of Cuban people, despite your heritage, aren't fans.

Again, this is coming from The New York Times, what do you make of that or do you -- in campaigning, view that as a badge of honor?

SEN. MARCO RUBIO, R-FLA., PRESIDENTIAL CANDIDATE: Yes. Well, The New York Times article you're referring to went to Cuba and interviewed a handful of people -- a handful of people that all, by the way, said the exact same thing. So I have three observations about it.

Number one, in Cuba, they would have said something positive about me, they probably would have been punished for it by the government.

And, number three, is, I'm glad that the Cuban government seems to be obsessed with me because what it shows is that we've struck a vein. We have called them out for who they are. They are a tyrannical regime that controls the entire economy and they are looking to more trade and engagement with the U.S. for one simple purpose: It is not to improve the lives of the Cuban people.

It is to perpetuate themselves in power. They have always relied on the donor state. They needed the Soviet Union. Then they used Venezuela. And now they're hoping new trade and commerce with America will provide them the currency they need to stay in power for the foreseeable future.

And I'm opposed to that. I want the Cuban people to have what they have and every other country in Latin America, free and fair elections.

CAVUTO: Donald Trump has criticized you on a variety of levels, but on a legal immigration, first and foremost, he seized on this sanctuary city murder in San Francisco as proof that you can't be half-hearted when it comes to going after illegals. He's all but claimed that you are -- how do you answer that?

That individual, that criminal responsible for that act, had been deported on four separate occasions and each time snuck back in. And it is absolutely true that we have a border and illegal immigration issue that is very serious. I've talked about that repeatedly. I have tried to pass bills to address it. I will continue to work to try to address it...

CAVUTO: ... Trump keeps saying this stuff about you? What do you feel about that? Is he being fair to you?

The problem is this is -- border security is a very legitimate issue.  Illegal immigration is a very serious issue. What happened now is he's made some other comments that are less responsible and those comments are now what everyone's focused on, you know. I think he -- the bottom line is the issue is -- and so we're let off the hook, all of these people that don't want to have a debate about illegal immigration. They want to focus on Trump's comments about Mexicans ...

CAVUTO: Do you think he's hurting the party, Senator?

CAVUTO: Do you think he's hurting the party?

It -- 40 percent of illegal immigrants in this country are coming legally.  They are overstaying visas and we are not tracking them. We have no idea who they are or where they are. And I've said repeatedly that until we deal with that issue, we can't do anything else on immigration. And I continue to say that. That is a very legitimate position.

It is one that I think most Americans agree with. And we should be focused on that. And we should not, through outrageous comments, let off the hook those people that don't want to have that debate. And so all they do is focus on what Trump said and distract from the real issue, which is the fact that we have legal immigration laws that are not being enforced.

CAVUTO: Now, I know you're tight for time, but Donald Trump is second in a lot of polls right now. So he is surging. That could be short-lived. But are you surprised by that?

RUBIO: I -- the polls, as I said, people, when I was in first place a few weeks ago, these things are going to go up and down.

They really mean nothing at this stage in a campaign. What happened -- what's important now is that we're out there, not just raising the resources to communicate with voters but actually talking to voters one-on- one in this process. Eventually, these polls will matter more. It's not in July of 2015. I said that when I was up in the polls; I said that when I was down in the polls. And ultimately I continue to believe that moving forward, that until we get into the debate season and until we get into more retail politics, where we're actually talking to voters, that's where I think you'll start to see the real factors in this race begin to weigh in.

CAVUTO: Finally, sir, I know that you've spent at an overnight at Mitt Romney's New Hampshire vacation home, along with Chris Christie and his wife. So you and your wife and then the Christies and then obviously the Romneys.

What happened that night? What was going on?

RUBIO: Well, it was pretty much nonpolitical. I mean, we had a good time.  The Romneys are very gracious hosts and they were very kind to allow us to stay in their guest home there. And we had a great time.

The kids were with us. We walked in the parade that weekend. And we spent good quality time with him and his family and Governor Christie is someone that I get along with well. Obviously we're running for the same office but that doesn't mean we have to dislike each other.

And so it was a great weekend. And I enjoyed being back in New Hampshire.

CAVUTO: Well, the Romneys seem to like you a great deal.

Tagg Romney, the oldest son, had said of you, he, from the get-go was very willing to do whatever was asked to do, no ego, was able to excite the crowds, create crowds. He went on to say that you learn a lot about a person, what they're willing to do and how they handle themselves. And he, referring to you, was great. The Romney folks have also popped up, a lot of their former finance guys, the campaign guys on your staff.

Is it fair to say that Governor Romney is very close to endorsing you?

RUBIO: No, I don't think that's fair to say. I don't suspect Governor Romney will endorse anyone in this race. He's someone I admire. He's someone that I like very much. I enjoy spending time with him and Ann.

And obviously Tagg is great as well and his family. And we had a great time. I wouldn't read too much into it. They're meeting with other people and they've been very gracious with others as well.

This campaign, it's about the individual candidates running now. And for me to be successful, I have to convince people that I'm the right person at the right time in the right place with the right message and the right vision for the future. And that's what we're going to focus on in this campaign.

CAVUTO: Senator Rubio, it's always a pleasure. Thank you, sir.

CAVUTO: I am still thinking of what they did, s'mores that night together?  What happened? We will never know.