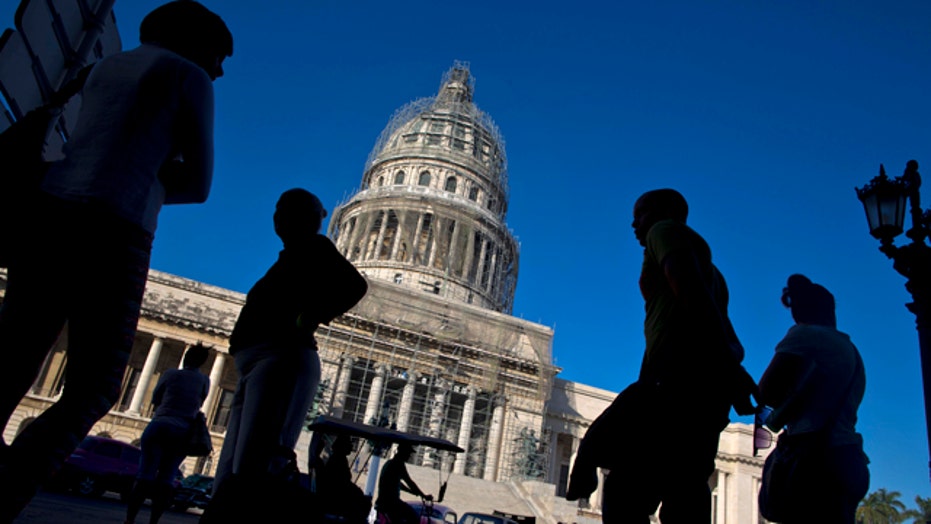 Sen. Rubio: Cuba deal will 'imperil' national security of US

This is a rush transcript from "The Kelly File," December 18, 2014. This copy may not be in its final form and may be updated.

MEGYN KELLY, HOST: Breaking tonight, just one day after President Obama announces a significant policy shift toward communist Cuba, it appears he's getting support from what might seem an unlikely source.

SEN. RAND PAUL, R-KY.: The 50-year embargo with Cuba just hasn't worked. I mean, if the goal was regime change, it sure doesn't seem to be working. And probably it punishes the people more in the regime because the regime can blame the embargo for hardship.

KELLY: My next guest is the son of Cuban immigrants and serves in the United States Senate with Senator Paul. Florida Senator Marco Rubio is a Republican, he's a member of the Senate Foreign Relations and Intelligence Committees.

SEN. MARCO RUBIO, R-FLA.: Well, like many people he has no idea what he's talking about. And I'll tell you why. Number one, the embargo on Cuba is an embargo that quite frankly has a bunch of holes in it. To give you an example. Cuba, the United States, is still one of Cuba's largest trading partners even now with the embargo. All sorts of commercial products and humanitarian products like food, stuffs and other things that are available in Cuba. Americans travel there all the time on what they call cultural exchanges. A bunch of Americans travel there by the way in violation of the embargo through third countries, Cuban-Americans can travel as many times as they want. They can send a lot of money back to Cuba to their relatives.

KELLY: You say that we have -- this is going to have real negative consequences for the American people. How so?

RUBIO: Well, first of all because the western hemisphere is our own backyard. It is not in the national interest to the United States to have dictatorships in our region. Dictatorships lead to repression. And now, what the President's saying by recognizing Cuba's government, is that in the 21st century, being a communist brutal dictatorship is an acceptable form of government. And I think that's going to have a chilling effect on the hemisphere, and ultimately imperil the national security of the United States.

KELLY: One of the questions that many people have been asking is, why did we do it? I mean, the president's critics including yourself has said, we got nothing for giving up a five-decade, you know, embargo, basically, and no diplomatic relations. We got nothing in return because they're even saying the release of Alan Gross was not in return for what the United States did.

Today we are being told that in some military circles there is concern that the reason may be something to do with Gitmo, with Guantanamo Bay, Cuba, and the detention facility there. Because I've gone and actually looked at the treaty. And the treaty that was struck that allows us to control this portion of Cuba and put Gitmo there, the detention camp, says it may be modified if both governments -- the Cuban government and the United States government agree. And when I've gone back and looked at the history of who can do the modification, we've had presidents unilaterally modify treaties without Congress.

So could it be that President Obama and Raul Castro may be on their way to doing something that will achieve the very first campaign promise Barack Obama made, which he hasn't been able to do, which is close Gitmo?

The other reason is, because they don't know what they're doing. It is unacceptable that you would send an inexperienced speech writer to negotiate this sort of deal with an experienced hardened dictator. And the result is what you have, a deal where the Cubans get more trade, more commerce, more visits, banking transactions, all sorts of sanctions being lifted. And in exchange Cuba agrees to absolutely nothing when it comes to democracy. They give up nothing. Raul Castro even bragged about that yesterday on television in Cuba.

KELLY: Final question, 68 percent of the people in the most recent poll out of Florida International University say that they support what the president has done. They wanted this prior to it happening. And a poll a couple years ago showed the same, over 60 percent support it. I know you say you don't care what the polls show.

KELLY: But if it's so bad, why do so many people support it? Why do we see cheering in the streets in Cuba today?

RUBIO: Well, a couple of points. On the Cuba front, I think the people of Cuba are so desperate, they're hoping anything is a better news than what they have today. They want this to work. So do I. I wish I was wrong, Megyn. I wish that in fact, this economic opening would lead to democracy.

But here's my second and final point, we have a poll every two years in Florida. It's called elections. Every member of Congress in South Florida is for the embargo. They have elected -- we had a governor's race where Rick Scott, who was for the embargo, defeated Charlie Christie who was against it. I was elected to the U.S. Senate on this platform, my predecessor was elected on this platform. That's a poll that takes place every two years at the ballot box.

And my final point is, when it comes to human rights, and freedom, democracy, basic human dignities, it doesn't matter what the polls say, even if that poll was accurate. We should always be on the right side even if we're not on the politically winning side.