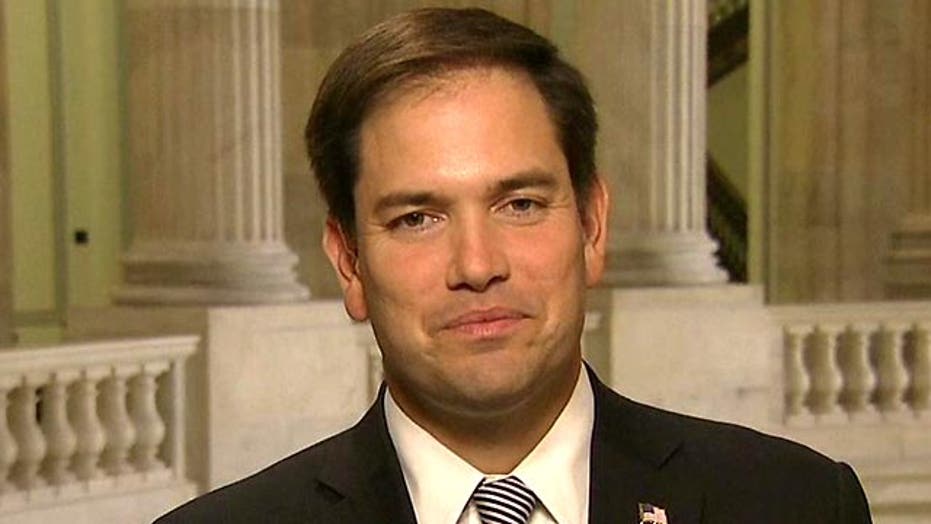 Why the lawmaker refuses to support the agreement

This is a rush transcript from "Hannity," December 17, 2013. This copy may not be in its final form and may be updated.

SEAN HANNITY, HOST: This afternoon, Harry Reid scraped together enough votes in the Senate to advance what is being touted as a bipartisan budget bill. But what supporters of the bill are not telling you is that it includes what one GOP lawmaker calls the, quote, "unthinkable" cuts to veterans' benefits.

Now, that despite the fact that the legislation will hurt future military retirees, each and every Senate Democrat -- they voted yes. And even more troubling, they were joined hand-in-hand by 12 Republicans, including Senators Alexander, Blunt, Chambliss, Collins, Flake, Hatch, Hogan, Isakson, Johnson, McCain, Murkowski and Portman. Now, fortunately, most of their colleagues had the moral courage to stand up and oppose the plan.

And here's what South Carolina senator Lindsey Graham said about this.

SEN. LINDSEY GRAHAM, R-S.C.: President Obama, don't sign this bill in its current form. We've got to January 15th. You, above everybody here, has a responsibility to take care of those who serve, who are retired, are going to retire soon and in the future. You are the commander-in-chief. Mr. President, do not let this happen.

HANNITY: Now, a final vote on the bill in the Senate is expected no later than tomorrow.

Tonight, we want you to join the conversation. Log onto our Facebook page. Well, would you support the so-called bipartisan deal? Plus, you can trend at 10:00 and sound off on Twitter. Use the hashtag #Hannity, @Seanhannity on Twitter is my Twitter address over the next hour.

Joining me now on this and much more, one of the many GOP lawmakers refusing to support the plan, Florida senator Marco Rubio.

Senator, how are you? Welcome back. Why oppose...

SEN. MARCO RUBIO, R-FLA.: Good evening. Thank you for having me back. Merry Christmas.

HANNITY: Why do you oppose -- and tell me your interpretation of the impact on the military?

RUBIO: Well, on the military side -- it's important to start with that because these men and women that are serving us in the armed forces will be impacted by it, particularly those who have retired and are depending on those retiree benefits that now will be reduced under this law.

But the more fundamental problem, I think, broader than that, is that this is a budget that basically continues to spend more money for our government than it takes in. It doesn't seriously deal with the debt, not just in my opinion, but in the opinion of almost everyone who's observed it from that perspective.

In fact, it increases spending by over $60 billion over the next two years, but it promises to pay for it over the next 10, something that, as we know, never happens. Look, these spending cuts that were put in place three years ago, as part of the big fight that happened back then -- they've basically now been wiped out. So that's a big problem and that's why you saw almost every Republican in the Senate vote against it.

HANNITY: Well, it was also double counting, as I understand it. And you're right, you're going to spend the money up front in the first two years. You won't cut the money until the last two years, and that's years nine and 10 of the deal. Isn't that right?

RUBIO: That's correct. And I mean, that's a gimmick that's always used here in Washington to do these sorts of budget deals. They basically ask you for the money up front and they promise to pay it back. But as we -- I mean, just right now, we're already breaking a promise to hold the line on spending if you vote for this budget. And just imagine two, four, six years from now.

HANNITY: All right, we keep hearing that this is a tactical difference, and that if only Republicans could win in 2014, then one year from now, in January 2015, then we'll really be able to do something. But in January of 2015, isn't Barack Obama still president? Does that mean we have to wait then until January of 2017 before they really fight on these things? When does the fighting begin?

RUBIO: That's the point. I mean, every year, we get told the same thing. You know, we need to wait until next year. It's not possible to do these things now. Meanwhile, the government -- the debt continues to grow. We have a very dangerous debt. It's the reason why we have a government that continues to grow the debt and an economy that's not creating enough jobs because this debt issue goes unresolved.

And so people look at this, they look at the dysfunction in Washington, they look at the inability now it appears of leaders in both parties to tackle this issue in a serious and meaningful way, and they conclude America is not prepared to bring the debt under control. That discourages people from starting businesses or growing existing ones in this country, and that's hurting middle class people in multiple different ways.

HANNITY: All right, so the president's poll numbers came out today, and he's -- two polls came out. One was an AP -- I'm sorry, a Pew Research poll, he's losing his base. Another poll came out today, where you can see right there that the president -- his approval rating at the end of his fifth year in office, you know, he's second to Nixon in terms of the lowest number.

Isn't that an opportunity, in terms of conservatives -- if they go out and sell their big solution-oriented ideas that they can actually probably -- there's an open mind in the country for new ideas?

RUBIO: Yes. Absolutely. I think that's exactly the opportunity that lies before us. And a couple things to remember. When this president was elected in 2008, think about the fundamental promises he made, that he was going to bring people together. In fact, he's divided people perhaps more than any president in modern American political history, pitting Americans against each other, telling people that the reason why they're struggling is because it's somebody else's fault. So he's broken that promise.

And then he also said he was in it to help the middle class, people who are trying to get ahead. And in fact, today we have 20 million people that are unemployed, millions more that are underemployed.

You know, people are starting to feel real desperate about the future. People have concluded that they're either one bad break away from losing everything, or they feel trapped in dead-end jobs they can't get -- get -- get ahead of, or even people that maybe living out their American dream are increasingly worried that their children will not have the chance to live their American dream.

And the opportunity we have, Sean, is exactly what you outlined, to show people how our principles of limited government and free enterprise and core family and traditional values that made our country so strong -- how we can apply those principles to the unique challenges of today to help people fulfill the American dream and get ahead.

HANNITY: We got a clip of Reagan on Johnny Carson from a long time ago, so relevant to today. We're going to play it on our next segment.

Kathleen Sebelius has finally admitted the truth, that, yes, many people are going to see an increase in their premiums. I want to play this for you.

KATHLEEN SEBELIUS, HHS SECRETARY: Well, I think that there are some individuals who may be looking at increases. I think you cannot make a statement based on cost unless you compare what they had to what they're going into.

HANNITY: Isn't it a lot more than that, though? I've read estimates as high as 100 million people will be paying more, getting new plans, not keeping their doctors, higher deductibles.

RUBIO: Right. Yes, so it's -- deductibles is a huge problem. I mean, now you have people that have deductibles as high as $10,000 or $12,000, but some $3,000 or $4,000. That's money you have to come out of pocket with. If you don't have that money, you're basically uninsured because your insurance doesn't even kick in until you kick in the cash first. For a lot of people, that basically makes this completely unaccessible.

And then the doctor component is the one that's also troubling because people are going to lose access to specialty care, to doctors they've been seeing. None of this was talked about, of course, when this law was passed five years ago or four years ago.

HANNITY: Well, they told us just the opposite, and that's why I don't think the president politically is going to be able to recover.

All right, last quick question. Jay Carney asked yesterday whether Obama will sign up for ObamaCare. Here's the reaction.

QUESTION: Has the president signed up for insurance yet?

JAY CARNEY, WHITE HOUSE PRESS SECRETARY: I have no updates on that. The president will purchase insurance on the exchange.

CARNEY: Obviously, it's -- the enrollment is still March 31st. So when we have an update on it, we'll provide it to you. But our guidance on that has not changed.

QUESTION: And what exchange it will be? And also, will we get a chance to see...

CARNEY: I just don't have any new information on that beyond what we said in the past, which is that he will.

HANNITY: Senator Darrell Issa on this program last night said it's not safe. There's no security on this website. I recommend the president not do it. He's the president of the United States!

This is only going to get worse, Sean. I think in the new year, you're going to see more and more people hurt by this. I think something's going to have to happen before -- even before the election.

HANNITY: Senator, good to see you. Merry Christmas. Thanks for being with us.