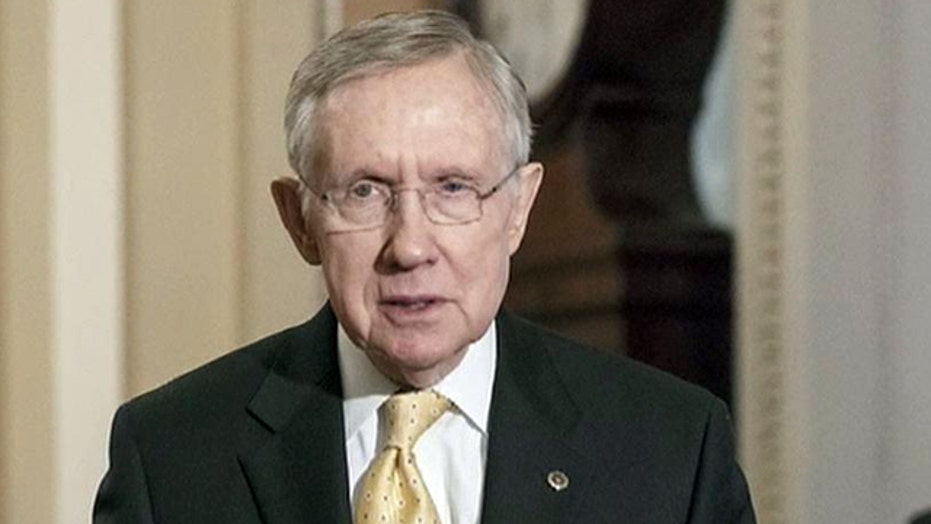 Does the Senate majority leader have a point?

This is a rush transcript from "The Kelly File," May 9, 2014. This copy may not be in its final form and may be updated.

MEGYN KELLY, HOST: Well, we are tonight debating what is going on with the media and politics. Senate majority leader, Harry Reid, thinks he knows, and says it's very simple. He thinks the media is trying to find blame with both sides when really only one side is at fault. Can you guess which one?

SEN. HARRY REID, D-NEV.: One of the problems the press has in modern-day journalism is everything you do is a tit for tat. You won't call things the way they actually exist. What has happened here is the Republicans have stopped everything from happening.

Joining me now, Dana Loesch, who hosts "Dana" on TheBlaze TV; and Mark Hannah, who is a former aide to President Obama's 2008 campaign and an adjunct professor of media studies at The New School.

You have to laugh. He clearly feels aggrieved by the media coverage, I guess, him and the Democrats, Dana, which a lot of people would be rolling their eyes in response to.

DANA LOESCH, THEBLAZE TV HOST: Yeah, I would have to agree with him.

The coverage is completely unfair. I think I'm a little different in that it's unfair to one particular party over the other. I think Democrats have been coasting with this. There have been a number of different studies that have come out about this. We can talk about how different reporters and different editors, where their partisanship lies.

The bottom line is that it's kind of a joke. This can't seriously be taken serious with a remark like this. There is nothing to support that anything has been made for fair for the Republican Party and media.

KELLY: Mark, do you think it is a sustainable suggestion that the media has a right-wing bias?

MARK HANNAH, ADJUNCT PROFESSOR OF MEDIA STUDIES, THE NEW SCHOOL: I think the media has a bias toward giving this kind of "he said, she said" version, version of objectivity. And when -- for example, the only reason Benghazi is coming up again in the news is because the Republican house launched this special committee.

KELLY: But why did they do that?

HANNAH: We've already had four or five. They have done it because this e- mail that came out, as you pointed out, from the White House, that somehow was a red flag for a certain Republicans, but we've already seen this investigated four times. We've had 13 committees and no evidence whatsoever there was any intention of wrongdoing.

KELLY: But if the White House had just released that document, while those investigations were underway, there would have been a chance to ask questions about it. They failed to do that. They didn't do it despite the fact they were --

HANNAH: But the document was not inconsistent.

KELLY: It was inconsistent.

KELLY: It was the first document that answered the question, who pushed it video. That's why the mainstream media got interested it.

Dana, let me ask you, back to Senator Reid.

HANNAH: It relied on the CIA --

KELLY: He seems to feel aggrieved, that he side is not getting -- things are very clear. A lot of the mainstream media may feel that way because, unlike what Senator Reid suggests, they ignored stories they have largely ignored stories they don't think are beneficial I suppose to the White House, like Benghazi and the IRS.

LOESCH: Yeah. Megyn, they don't just ignore them but go on a trash-and - smash campaign against any reporter that dares to discuss it. You were talking about Lara Logan. Well, I just read this piece in "The Daily Mail" absolutely going after Lara Logan, going after her with personal attacks, too. If we talk about a war on women, look at how we have Sharyl Attkisson and Lara Logan, two women at CBS, who their president happens to be the brother of Ben Rhodes, who authored that e-mail, and there is this campaign to discredit them. Why? Because I guess they didn't follow the talking points and asked too many questions.

KELLY: We'll talk about that.

HANNAH: Are you kidding?

KELLY: But I want to ask Mark about this survey, because this survey just came out. A thousand journalists surveyed, The School of Journalism at Indiana University, and they determined there is a 4-1 ratio, four times more likely to identify as a Democrats than Republicans. With that, do you think that bias is likely to seep into some coverage?

HANNAH: Megyn, I saw that survey from Indiana. Your producer shared it with me. It also showed two-thirds had no political identification or affiliation whatsoever.

HANNAH: Right. So journalists -- is the press liberal? There are studies that show the owners, these media moguls, are largely conservative. Whether or not a journalist, political affiliation or owner affiliation influences the coverage, which I don't think it does in the case of professional journalism. It's this thing that we always debate back and forth.

But I want to take issue with something about Lara Logan. She works for "60 Minutes." This is one of the most reputable news organizations, longest running in American history. And is guilty of extremely, if nothing else, sloppy reporting by publicizing the --

KELLY: There is no question she screwed up.

KELLY: She screwed up.

KELLY: There is a question about why there is a lengthy magazine article now detailing her sexual affairs, showing pictures of her in a bikini --

KELLY: -- and so on. And we'll take that up with Bernie Goldberg in a moment.

Panel, great job. Thanks for coming on.