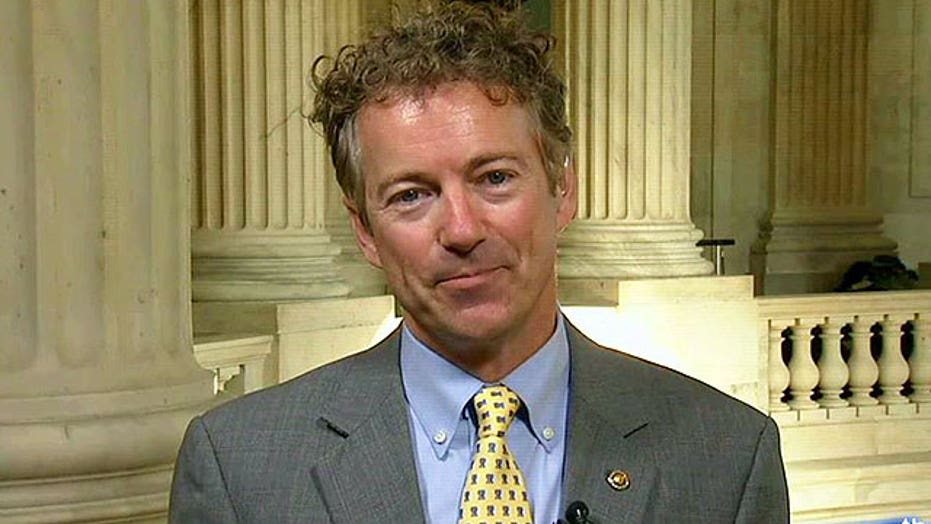 Rand Paul: 'The invasion of Iraq was a mistake'

This is a rush transcript from "The Kelly File," May 13, 2015. This copy may not be in its final form and may be updated.

JEB BUSH, FORMER FLORIDA GOVERNOR: I apologize, this guy looks like his head is about to explode so we need to ask -- let him talk.

UNIDENTIFIED MALE: Governor, I saw your interview with Megyn Kelly and there was one question that she asked you about Iraq and Afghanistan.

UNIDENTIFIED MALE: Iraq, I'm sorry and you asked or you said I think it was yesterday that I don't want to answer hypotheticals. Don't you think running for president is hypothetical when you say if I run for president dot, dot, dot?

BUSH: Rewriting history is hypothetical. What -- what she said was, "Knowing what we know now, what would you have done?" I heard some -- I didn't -- whatever I heard it was translated, "Knowing what you knew then, what would you do?" And I answered it honestly and I answer it the way I would have -- I will -- I answer all the time, which is that there were mistakes made but based on the information that we had, it was the right decision and same decision that people on the left and right agreed with.

MEGYN KELLY, HOST: Well, that was former Florida Governor Jeb Bush and an astute "Kelly File" viewer at a town hall-style event in Reno, Nevada earlier today. The governor is still dealing with questions on Iraq after our interview earlier this week.

He said he misheard our question on Iraq, and he's been trying to set the record straight ever since while also defending his brother the former president.

Earlier, I spoke with Kentucky Senator Rand Paul about that and much more.

KELLY: Senator, good to see you tonight. And so, let's just start -- let's just start quickly with a question that I asked him, and I think for you it will be relatively easy given your earlier positions, but knowing what we know now, would you authorize the invasion into Iraq?

SEN. RAND PAUL, PRESIDENTIAL CANDIDATE, R-KY.: No, I think the invasion of Iraq was a mistake, and I thought it was a mistake even at the time, and I think it's a mistake for a reason that I think is consistent with a lot of other things that have gone wrong in the Middle East. I think when we've toppled secular strong men, secular dictators, we got in chaos in the rise of radical Islam.

So, you have Iraq now that's almost like a vassal state for Iran. You have Iranian troops in Iraq. Iran is much stronger now with Hussain gone. So, I think really the objective evidence on the ground shows that toppling Hussain made us less safe as a country but also the same applies to Hillary's war in Libya toppling Qadaffi made us less safe.

KELLY: Even the president has acknowledge some ownership on that one and John Bolton has made a similar point to the one you're making which is the United States made them better with some of these -- better off with some of these dictators in place but hindsight is 20/20, and for you to say that it was a mistake at the time. And you would have advocated a different decision at the time, is a difference between you and Jeb Bush and -- and Chris Christie, too, came out today and at least said, he believes George W. Bush made the best decision he could at the time. Do you disagree with that?

PAUL: I think it's been a (ph) consistent mistake and if we don't learn from history, we're making another error and we'll continue to make errors. Yes, I think it was a mistake because I think Hussain was a counterbalance to Iran and even at the time, even if he did have weapons, he had used weapons on his neighbors previously. He'd used chemical weapons on his neighbors.

So, I don't think anybody thought Hussain was a great guy but he was seen geopolitically as a counterbalance to the another nation that is a treat to us in the region and to potentially a threat to us here in Iran and I think really not just in hindsight, but in looking forward at the time, they should have realized by toppling Hussain, they would have made Iran stronger and made Iran more of a threat.

KELLY: How can you say that because you -- you were the one who was out there in 2007 saying you didn't perceive Iran as a threat. So, how is George W. Bush back in 2003 supposed to say, "Let's not invade Iraq because Iran is too much of a threat," and it will out --it will eliminate the counterbalance?

PAUL: So, I think they've become.

KELLY: Because you're saying George W. Bush should have foreseen they were a threat back then. So, they are a threat again in 2003 but they weren't in 2007 and now they are, again, 2015?

KELLY: Let's get back to broader foreign policy because when I had the following exchange with Jeb Bush, quite frankly, you were the --you were one of the first people I thought of in terms of the likely reaction. Let me play it for the audience.

BUSH: Our foreign policy ought to be -- ought to be grounded in not just the export of our own values or nation building. Those are -- those are good sentiments, but first and foremost, insecurity and peace. And I think we've -- what we've seen under this president is as we pulled back, we're creating an incredibly insecure world.

KELLY: Do you agree that nation building and exporting values are good sentiments on foreign policy?

PAUL: Well, the interesting thing is Jeb and his comments actually agrees -- disagrees with his brother. When George W. ran in 2000, he actually said nation building was a mistake, and I think his views changed after 9/11. But I do think that there is a lot of evidence that we are not very good at creating nations and that when we try to create nations by toppling governments, that really the opposite has happened.

KELLY: How about the Patriot Act because there's about to -- you are reportedly getting ready, perhaps to engage in another long speech of sorts in the Senate. That's what I've heard on the Patriot Act and -- and civil liberties and our protections.

This has been an ongoing issue in the country especially since Edward Snowden revealed what he revealed and I know you had defended him to some extent and yet the director of National Intelligence said he -- he endangered us, that he cost us greatly in a national security and so did then his counterpart over at the DIA so that he cost -- he endangered American troops.

So, what is the point -- what are you about to do in how you respond to those who say that your position endangered security?

PAUL: I think the greatest thing that has endangered our security in the last couple of years was when the director of National Intelligence lied to us because you need to have trust in your intelligence officers. They have such great power. The intelligence community could do horrific things to invade our privacy and I think most of the time they don't, but when they lie to us, we lose trust and that actually made...

KELLY: In your defense, he did -- he did it right on camera. We played it many times and he said not wittingly and he did it.

KELLY: But then he came out and said that Snowden called -- caused massive historic security damage with what he revealed so even though he might be tipped (ph) off.

KELLY: . at Snowden, you know, we don't want massive security damage to the United States.

PAUL: Right. What I would say is that I think you can catch terrorists using the Constitution, that you don't give up on the Bill of Rights to catch terrorists. I think sometimes our blanket collection of all the records of all Americans has taken our eye off the prize.

I would spend much more effort after him. The guy in Phoenix, Simpson, we knew about him. We had arrested him previously. We had probable cause.  If I were the judge in both of those cases, I would have said, yes. Here's the warrant, search all the records and that if you come back to me and say they called five people that are suspicious, I would have given you five more warrants.

KELLY: That was the guy who went to Garland, Texas, and tried to execute the people holding the free speech event. Where are you on that? Was it purely about free speech or were those folks behaving provocatively or in any way inappropriately?

PAUL: Well, you know, the First Amendment is about protecting speech that we find unacceptable. It's easy to -- if I say, "Oh, I love Megyn Kelly. She's a great journalist." That's easy to accept but if I say something really terrible that's harder to accept and there are really despicable things that are actually said and that's the harsh language you have to accept on the First Amendment.

However, if I were their parent or their priest or their friend, I would advise you not to trash other people's religion, that doing it righteously (ph) isn't good for peace, it isn't good for things but I would defend the right to say so if they want to say on obnoxious things.

KELLY: Senator Rand Paul never says obnoxious things. At least not here on "The Kelly File." We're grateful for that. Thank you, sir.