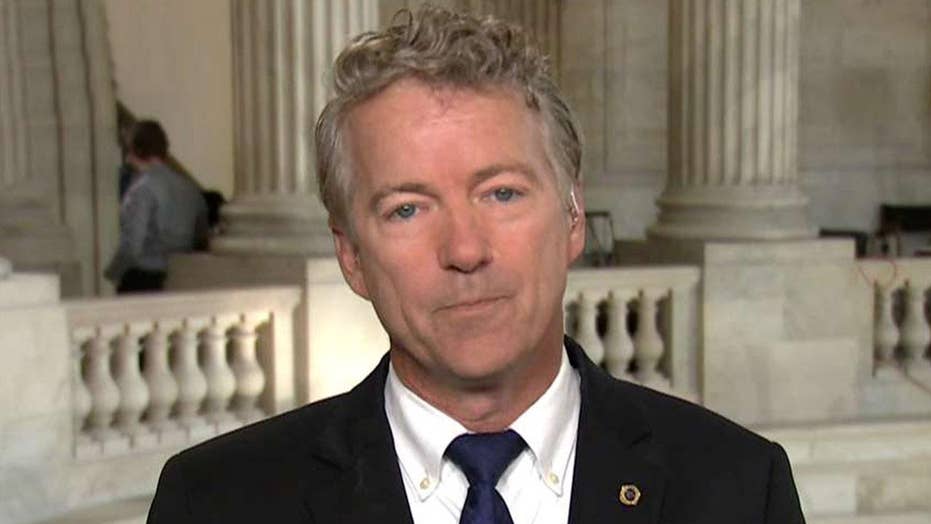 Republican lawmaker from Kentucky goes on 'Your World' to weigh in on Syria strategy and to discuss where he stands on confirming Mike Pompeo as secretary of state.

This is a rush transcript from "Your World," April 12, 2018. This copy may not be in its final form and may be updated.

NEIL CAVUTO, HOST: Into my next guest, Senator Rand Paul, I want to focus on the markets for a quick second here. They were up on the day, largely on the belief here that we're not going to do anything rash or certainly immediate there, or the prospect for, you know, an immediate interference in Syria was not necessarily in the offing.

They could be wrong. They often are.

Senator, are the markets right? No immediate incursion?

SEN. RAND PAUL, R-KENTUCKY: You know, I think the markets are reacting to a lot of things.

Foreign policy is one. I think the threat of a trade war is another. Massive, chronic deficit spending is another. Maybe more immediately to threats of war. But I think that there's still a great deal of potential for hostilities.

That's what some call it. That's when they don't want to use the word war. But, yes, I think we're -- I think something is going to happen in Syria. And I have been very clear that the Constitution doesn't allow the president to do this without first asking Congress.

CAVUTO: I noticed today, senator, following the hearing closely with Director Pompeo, that you were very tough on him, and not so much interested in his conversation he might or might have had with Bob Mueller, but more to the point on this Syrian issue and whether he or we should be going in there.

PAUL: Well, one of the points I have been making is that one of the things I liked about President Trump is he said the Iraq War was one of our single biggest mistakes, geopolitical mistakes.

And yet the president really since 2012 has been adamant that we have stayed too long, that we have been building roads for people who hate us over there, and that it's time to come home and start thinking about America first.

So I'm not so sure that Pompeo is the best representative of what the president actually believes.

CAVUTO: So, you would not respond to Syria's chemical attack on its people?

PAUL: I think the first thing we need to determine is who did this.

There's still some question whether or not it was the Syrians or whether there was an accidental bombing of a depot of chemical weapons.

One question you might want to ask is, to whose benefit is this? The only thing that can unify the world to actually go in -- Assad has been winning everything. We have been leaving Assad alone. Why would he want the entire world to come after him for doing something the entire world rejects, chemical weapons?

So, there is something here that doesn't fit and doesn't make sense. All Assad has to do is lay quiet. He's winning. We're not planning on decapitating Assad from Syria, other than what gets the U.S. and the world motivated? A chemical attack.

You can kill more people with semiautomatic gunfire with five shooters than they kill with chemical weapons. Something doesn't make sense here.

Others have expressed that concern that maybe we're leaping on something that doesn't quite smell right. But the French president, Macron, had indicated French intelligence had confirmed that it was indeed a Syrian- inspired attack.

PAUL: The hard part is this, Neil.

PAUL: You can confirm and see ships or airships or helicopters going and dropping bombs, but the question is, is there a possibility that they're exploding depots of weapons that are already on the ground?

Because there's something just strange about the way this is done and that it really gets the whole world united to do something about Assad, when the whole world is sort of saying, well, Assad is who he's going to be and we're going after ISIS.

This changes the whole perception of that war. Why would Assad want to do that?

CAVUTO: Yes. It sounds like you're a no vote on Pompeo.

Millions of Americans voted for Trump because he said we would come home from Afghanistan. He said that the Iraq War was a mistake. He seemed to understand that we shouldn't be everywhere all the time.

Even Pompeo in his remarks said, oh, it's not longer -- there's no military solution to Afghanistan.

Well, if there's no military solution, do you want to be the last soldier sent in for a war that is trying to get a negotiating tool for diplomacy, and it's not going to be a victory?

Who wants to send their kid to that? So, if there's no military solution, let's declare victory and come home.

CAVUTO: All right, so if they want to bypass the committee and go straight to Senate to vote on his nomination, would you try to block that?

PAUL: I don't think I can in any way.

So, traditionally, you have to be voted out of committee. But I have a feeling that if he's not voted out of committee, they will bring him to floor anyway. And then it's really up to the Democrats. If Democrats believe that they're not too concerned with the rule of constitutional law in foreign policy, then he may well win. But we will see.

CAVUTO: Switching gears very slightly, Senator, some of your colleagues, including some Republicans, are trying to push a measure that would prevent the president from firing Bob Mueller.

PAUL: I'm not for Congress getting involved in this.

I don't like that idea of special prosecutors. I think they have way too much latitude. I think the indictments and all of the accusations so far have had nothing really to do with Russia or Russia collusion.

So I think we have gone far afield of what they were supposed to do. And I just don't like the idea of having so much prosecutorial power to look through everybody's bank records, to go to your personal lawyer and rummage through the office and look at this stuff.

It just is unseemly. And I worry that if you can do this to the president, can you imagine what these intelligence agencies could do to an ordinary American? So, I'm very worried about it.

CAVUTO: So if the president were to fire him, would he be justified, thinking that, to your point, it's gone way far afield from what it was supposed to be?

PAUL: I think it's one of these things where we never should have had a special prosecutor, but now that we do, it's hard to fire them, for many reasons.

I think the public perception of trying to cover something up by firing them is almost insurmountable. It's hard to imagine doing that.

But the one thing the president could do -- and if were the president were asking, what I would say is, he needs to declassify more of the shenanigans that have gone on over there.

See, there's a lot of stuff that is kept secret. And the Department of Justice wants to keep it secret from the Congress and from the people, but he should declassify reams and reams of this stuff, put it out all there.

Let's know about James Clapper and his lying to the Congress and that it was a felony. Are we going to investigate that? Should he have a lifelong pension for lying to Congress? Should Peter Strzok still work there? Should Lisa Page still work there?

CAVUTO: How long do they have that authority, when they're repositioned or even dumped?

PAUL: Their response to me is, they wouldn't tell me and yet they would tell me that all FBI agents have top-secret clearance, which means they can access the databases.

So my worry all along -- and even before Peter Strzok, before Trump, before the whole presidency -- is that our intelligence agencies need to be restrained by calling a judge and that check and balance where the police or the FBI always have to call a judge.

You should not be allowed to search an American in any database, IRS, any of this other stuff, without first presenting proof or probable cause that they have committed a crime to a judge.

CAVUTO: The reason why the president gets exasperated by this, we're told, Senator, he thinks these agencies, most notably the Justice Department and the FBI, have it out for them, that they are gunning for him.

PAUL: Clearly, some do. Peter Strzok and Lisa Page have been found out by hundreds and hundreds of texts that they were trying to do what they could to prevent him from being president and that they had some sort of insurance policy.

That should be in public forum. Should we not ask these two agents, what was their insurance policy? Should Andy McCabe be forced to testify under law?

So, really it does look like two sets of justice. They go after the president's lawyer with a raid to all of his houses. They really go against the precedent of not invading the attorney-client privilege. Did anybody invade Hillary Clinton's lawyer? Is anybody doing anything about Peter Strzok?

It looks like two sets of justice here. And I'm for absolutely Peter Strzok and Lisa Page shouldn't work at the FBI. If they do, they should be on restricted duty and they shouldn't be allowed to search Americans' databases, because I'm afraid they're so biased, that they bring that bias to work and they could well be abusing that power.