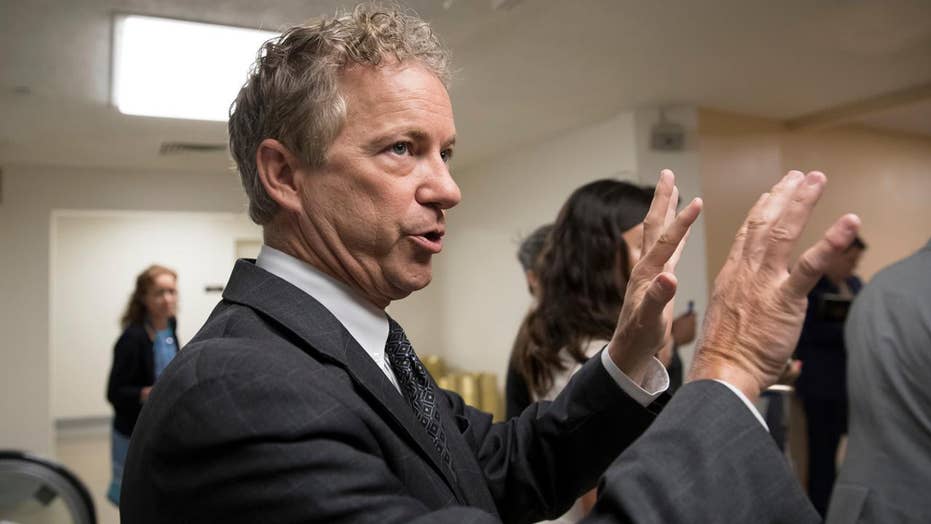 Sen. Rand Paul: Skinny repeal is better than no repeal

On 'Your World,' Kentucky lawmaker says ObamaCare has destroyed the insurance market

This is a rush transcript from "Your World," July 26, 2017. This copy may not be in its final form and may be updated.

NEIL CAVUTO, HOST: On the phone with us right now, Kentucky Senator Rand Paul. His amendment to repeal ObamaCare just failing. Seven Republicans voted against it. By the way, John McCain was among them.

But the good senator on the phone with us now.

Senator, what did you think of that?

SEN. RAND PAUL, R-KENTUCKY: Well, you know, I think it's a victory for conservatives that we did get a vote for a clean repeal. The vote we had yesterday, which actually got less support, was a vote for a very muddied partial repeal, but with a huge insurance company bailout super fund.

So I think it's a good news that more Republicans actually supported clean repeal. It's disappointing, though, that many Republicans who promised to vote for repeal, already had voted for this repeal, chose this time not to vote for it.

CAVUTO: I don't know what they're going to end up with, whether it's the skinny repeal thing, Senator, but the whole thing seems goofy in the end.

PAUL: Well, skinny repeal is better than no repeal, is what I would say.

CAVUTO: But is it really? Is it really? Because I know it removes the mandate or likely would for companies and individuals, maybe the medical device tax, but virtually all other taxes remain in place.

The actual structure of ObamaCare remains in place. So I'm wondering, well...

PAUL: But here's the thing, Neil.

The Republican leadership plan kept the fundamental flaw of ObamaCare. The 2015 did also. Some of this is because the arcane rules of the Senate prohibit...

PAUL: You from getting to the actual kernel of what is the terrible disaster of ObamaCare.

As long as you let people buy insurance after they get sick, you will have adverse selection and you will have a distorted marketplace. So, really, you're right. None of these fixes the problem.

But what we have to try to do is rip out as much of the terrible distortions that ObamaCare has caused and then we fight on. But ObamaCare really has destroyed the insurance market. And it's going to get worse.

Right now, they're not forced to do anything because, even if we get skinny repeal, I still don't think they are going to come to the table to negotiate.

CAVUTO: When Senator John McCain was speaking yesterday in the well of the Senate, he was talking about this notion that something is better than nothing, one that is pushed by many of your colleagues, sir.

And he was more or less saying -- I think I got the gist of it -- that's not necessarily the case, nor is it any way to go about legislating.

What did you think of that, his opposition to this measure notwithstanding?

PAUL: Well, I would say that people around town have been saying, be on the team, pass it, pass it. Whatever it is, you just got to pass it.

But the reason I will advocate and vote for skinny repeal is that it's the best I can get, given the colleagues that I have. You send me some better colleagues, and I will repeal more of it.

But ObamaCare itself is a disaster. It's caused premiums to double in the individual market, and I want to get rid of it.

CAVUTO: I want to ping-pong over, if you don't mind, Senator, to this tax situation.

The president interview with The Wall Street Journal left open the possibility that he still very much wants to see tax cuts and wants to see the corporate rate, for example, cut to 15 percent, but it necessarily wouldn't be across the board in his eyes.

He opened the possibility of the rich not getting any tax break. In fact, he had an interesting line. If there's upward revision, it is going to be on high-income people.

That got some people here saying, is he talking about a tax hike for the rich? How do you feel about all this?

So, if you tell the American people I'm only cutting it on the middle class below $75,000 a year, you're not going to cut any taxes, because not much of the taxes are being paid in that category.

So, the bottom line is, we have made the tax code more and more progressive over time. The people on the low end have been removed from the tax rolls and the people on the upper end have continued to get higher and higher taxes.

The bottom line is, when you cut the taxes for rich people, it helps everybody in the economy, because what happens is, you leave more money in the economy. I would cut everybody's taxes, but I would also cut those who are in the wealthy category because they pay the bulk of the taxes.

CAVUTO: What is going to happen, it seems between this rethinking tax cuts on the wealthy, Senator, and what looks like a concern on the part of many in your party about those who would lose their insurance under the revised Republican measures, and keeping so many of the taxes associated with the Affordable Care Act, that your party is running scared right now.

PAUL: Yes, I think that the way I summarize it is this.

Too many Republicans lack sufficient confidence in what made America great, and that's capitalism, freedom. It shouldn't be about who has money. If you work hard and you get more money than your neighbor because you sell more of your services or your products, that's capitalism. That means you have been rewarded by people freely and voluntarily buying your stuff.

CAVUTO: Well, it is true.