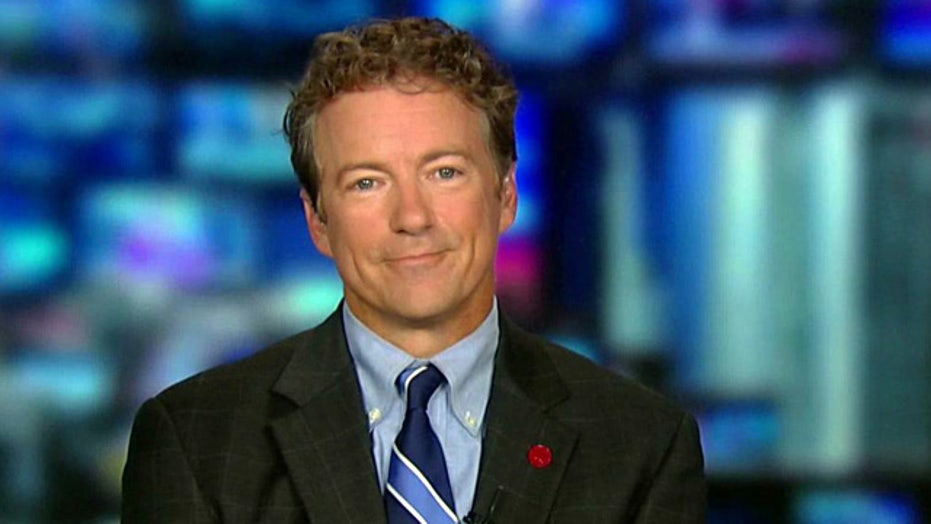 Sen. Rand Paul on why he's willing to stand with Cruz

Congressman says Republicans 'need passion' when it comes to ObamaCare

This is a rush transcript from "Hannity," September 25, 2013. This copy may not be in its final form and may be updated.

SEN. RAND PAUL, R-KY.: Why is the senator from Texas here today? To say to the president, "We need to talk." What does the president say? He says, "My way or the highway." When the American people said they wanted dialogue between Republicans and Democrats, how do we get there? We have to stand up for what we believe in so they will come and talk.

Joining me now live from Washington, Kentucky lawmaker Senator Rand Paul. How are you, sir? Welcome back to the program. You must be -- I'm a little tired. Because I was up watching you guys late last night and early this morning. So, I assume you're a little tired today.

PAUL: Well, I think Ted did all the heavy lifting. I was the supporting cast. I was glad to be there some. But Ted Cruz deserves credit for a one heck of a long speech.

HANNITY: What time did you finally leave last night? Because I know you were back there by 6:00 a.m. this morning, right?

PAUL: I was there early. But really, Ted Cruz and Mike Lee deserve the credit. They put most of the work in. The rest of us tried to support when we could. But they deserve most of the credit.

HANNITY: All right. Before we get to the substance of this, you are now known for your own filibuster. The rules are pretty tough. You have to stand the whole time. No eating in the Senate chamber. You can't go to the bathroom. You have to be very technical in terms of the words you use so you don't give up control of the floor. That's a long time not going to the bathroom. Are certain, let's say, preventative measures made in cases like this? What do you guys do? Do you dehydrate yourself before you do this?

PAUL: I'm not going there.

You know, I don't know and have any answer to anything about that other than to say that I did have to stop because that was my reason for stopping, because nature was calling me, and that's why I stopped.

HANNITY: Thank you for sharing, sir. We really appreciate it here.

All right. On a substantive note, there on a one hand there was really great excitement among conservatives watching this last night, saying there is somebody who is fighting. Just like when you did it. And then you see where the other -- the rest of the Republicans are in this, and we're saying, no, we're going to vote for cloture which will then allow Harry Reid to strip the defunding measure from the house CR, and that means that it's going to go back to the House without that. That's disappointing a lot of people. Why won't they stand with you and Cruz and Marco and Mike?

PAUL: Here's what I would say, is that I have been traveling the country a lot. And everywhere I go, people want, you know, Republicans to win, conservatives to win. I tell them we need passion. So, what you saw with Ted Cruz leading it, Mike Lee leading this, was passion. People sorely want us to stand up.

For example, Benghazi. They're like, why won't someone stand up and speak truth to Hillary Clinton and ask her, did you order the marines not to support our soldiers? People want answers but they want someone who believes in something, who is unafraid to stand up and fight. And I think that's what Ted and Mike showed in this.

HANNITY: OK. But they are asking, where are the rest of the Republicans here? Every Republican I know ran to repeal ObamaCare. Now, I keep hearing that there are tactical differences. That's what I keep hearing. It seems to me the tactical differences, "Well, we can't do it now because we're going to be blamed for shutting down the government. So, elect us in 2014, and then in January in 2015. Then we might be able to do something when we have the House and the Senate."

By that time, I think it's going to be impossible to do anything.

PAUL: You know, ultimately I don't think it is a good idea to shutdown government, either. I'm not going to vote for one penny for ObamaCare. I won't. I'm not going to vote for any spending bill with money in it. But also, I don't want to shutdown government because I think of the disruptive nature of it. And I don't think it's our fault, frankly. The president says, "Oh, Republicans, they want 100 percent of what they want or they will shut down the government." It's actually completely the opposite. The president wants 100 percent of ObamaCare or he's going to shut the place down.

PAUL: They won't even allow one amendment to modify ObamaCare on the floor.

HANNITY: But I don't see the Democrats engaged in this fear. They see the Republicans blinking and they're just getting more, embolden and stronger by it. Why are you guys put it on them? Pass the bill, fund the government. Don't fund ObamaCare and say, if you want to shut it down, shut it down. Why not? Is this not worth taking a stand on?

PAUL: Well, I think it is worth taking a stand. And I absolutely want to take a stand. No more money for ObamaCare. But at the same time, I think that when we are trying to grow our party, it could disrupt and distract us if government shuts down and Social Security checks end and checks the soldiers end. So, I don't want either situation. And I think really that by standing on principle -- what Ted Cruz and Mike Lee did -- standing on principle, maybe we force them to get rid of some of the worst parts of Obamacare. Maybe we don't ultimately win. All I'm being is a realist. Maybe we don't know if we win, but we say is, maybe we get rid of the medical devices tax, maybe we get rid of the insurance tax. Maybe we get rid of the individual mandate.

HANNITY: I think what a lot of people want is for Republicans to fight, and meaning all of you. And it seems like this tactical difference, it's either now you stand up and you risk what the media and risk what the left will say about you being guilty of shutting down the government, or you wait until 2015 after an election that you may or may not win and you still have Obama as president. That's the difference. That's what I see the two choices as.

PAUL: Maybe. I think it is also important to say and to know that we are also battling against Democrats who are for funding ObamaCare. Even with the differences within the caucus -- and there are some -- every Republican in our caucus is for defunding ObamaCare. I don't think it's not fair to characterize some of them and say, "Oh, well, they are really for ObamaCare." None of them are for ObamaCare.

HANNITY: I'm not saying that.

PAUL: I'm not saying you are.

HANNITY: They're not willing to fight and take it to the mat.

PAUL: I'm just saying it's not fair to characterize people that way.

HANNITY: Mike Lee, who is coming up, is willing to stand. Where are the other 39 or 38 Republicans? Where are they?

PAUL: You know, I guess what I'm trying to say, what's most important is, where are the seven or eight Democrats that will vote to fund ObamaCare that are really --

HANNITY: I don't expect them to. They didn't run on ObamaCare.

PAUL: -- I'd like to see them gone. We need to direct some of our venom or some of our anticipation in trying to make things different towards getting rid of some of the voices that are the problem here. The problem is too many Democrats.

All right, good to see you, Senator. Thank you.

HANNITY: Get some sleep tonight.