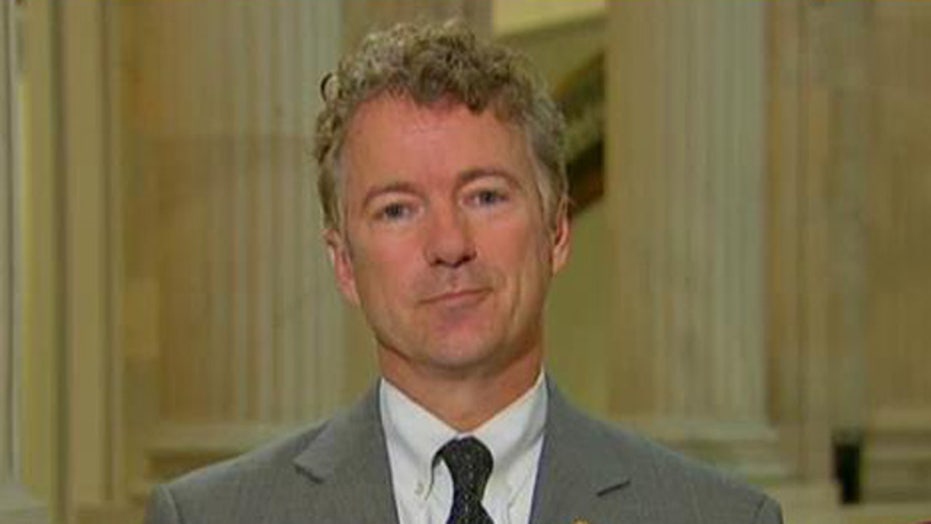 Lawmaker weighs in on the chokehold case

This is a rush transcript from "Hannity," December 4, 2014. This copy may not be in its final form and may be updated.

SEAN HANNITY, HOST: And meanwhile, my next guest, Kentucky Senator Rand Paul, speaking out about the Eric Garner case and says that he thinks politicians and taxes are to blame for the entire situation. The senator joins us.

Senator, good to see you again. I'm making the same point. Six dollars a pack, city/state taxes -- that has created a black market. And they literally have cops -- because of the revenue involved with fines and arrests, they have cops whose full-time job is to go into stores and check that the New York tax stamp is on every pack of cigarettes.

SEN. RAND PAUL, R-KY.: Well, and it may not be the whole explanation, but it's at least part of it because the thing is, is about six months ago, a directive came down from City Hall through the police commissioner saying that, we want you to aggressively go after people selling individual cigarettes that may or may not be taxed.

And I think, my goodness, do we not have enough violence going on in our community that really needs to be policed that we're going to go harass people for selling cigarettes?

HANNITY: Senator, it's even worse. You can smoke a joint in the streets of New York City and all you're going to get is a summons. I'm not even kidding! That is how this mayor treats that issue.

PAUL: But I don't want to make light of this. I've seen the video, unfortunately, several times, and it is sad. It's horrific to see him gasping for breath and saying "I can't breathe, I can't breathe."

And there was a case like this about 30 years ago. There was the Michael Stewart (ph) case, where in New York City, he was spraying graffiti on the subway walls. And it's illegal. We don't want it to happen. But he was held in a chokehold by 11 white police officers, again, who were indicted but that were not convicted.

The question here is something wrong really also with our tactics.  You know, I understand police have a tough job, and if someone's armed and you're unsure and it's dark and all this, but this was in the daylight.  They outnumbered him five to one. I think there was a better way than holding him in a chokehold.

HANNITY: What do you -- I know that -- I am sure, and I really want the evidence released because -- we have to go back, nine of the 31 arrests of Eric Garner dealt with untaxed cigarettes. It's absurd. The whole -- the notion that this is even a factor in this man's life is unbelievable to me.

But I think for people that really want to understand the grand jury decision -- I bet it was very sanitized, very technical. What are the officers taught in terms of appropriate behavior, inappropriate behavior, a legal chokehold, a chokehold versus a headlock, a carotid artery chokehold, an air choke?  It got very technical in there. And a headlock is not a chokehold, as everyone defines it. And I would argue that that's probably how they came to their decision.

PAUL: Here's the other thing, Sean, that not many people have been mentioning. Legal standards are difficult standards sometimes to prosecute people. But there's another standard for employment. And I think one announcement that would be good, and it's sad in this officer's case, but at the same time, he used bad discretion. He didn't use discretion and he made a very unwise decision. He should not be given the power to be able to use that kind of force.

So I don't think you can have an officer that makes this bad of a decision work as a policeman.

And I know it sounds sad, but I mean, Eric Garner died, and he didn't need to die.

HANNITY: But do you really believe that the officer's intent was -- I mean, there was resisting on Eric Garner's part. And so...

PAUL: I don't think it has to be the intent. And that's why when you talk about conviction or indictment versus continued employment, there's a much different standard. The standard...

HANNITY: ... supposed to take him down, then?

HANNITY: How was he supposed to get him to agree to be handcuffed, if he's not going to agree?

PAUL: Right. Well, I think that using deadly force for people who aren't armed really is not what we should use.

HANNITY: But again, if you look at the coroner's report, yes, it contributed, but he also had high blood pressure. He had asthma. He had heart disease, all contributing factors to his situation, no?

PAUL: Right. But you have to have discretion. So for example, if you see an 85-year-old woman jaywalking, it's against the law, do you put her in a chokehold?

PAUL: You see a guy -- this is a big guy, but you see him selling cigarettes...

HANNITY: But if he resists, what do you do?

HANNITY: All right. Thank you, Senator. Appreciate it.