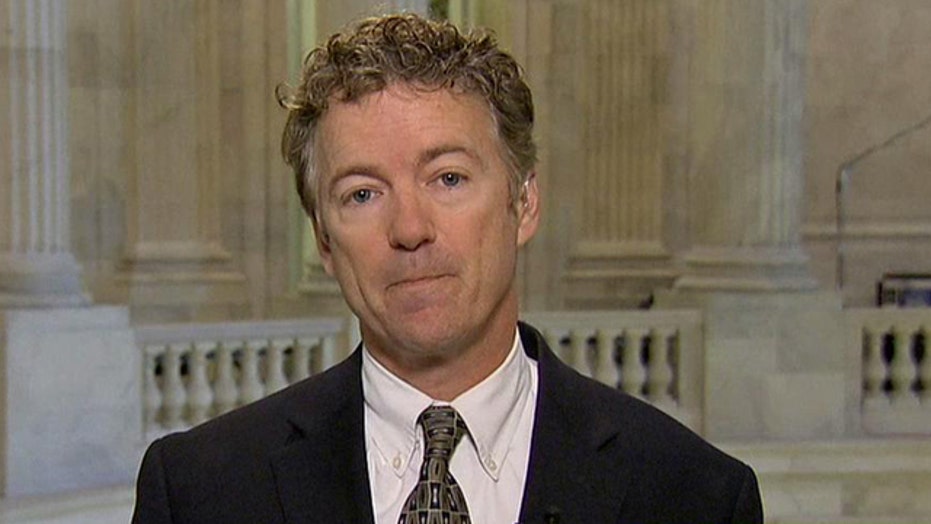 This is a rush transcript from "Hannity," November 13, 2013. This copy may not be in its final form and may be updated.

SEAN HANNITY, HOST: Conservative Senator Rand Paul delivered a major address before the Citadel's Corps of Cadets last night. During his remarks he had a powerful message for a possible 2016 presidential contender regarding Benghazi. Let's take a look.

SEN. RAND PAUL, R-KY.: When Hillary Clinton was asked for more security, she turned the ambassador down. Under cross-examination I asked her, did you read the cables? She said she never read any of the cables. That's her excuse. She says, don't blame me. Somebody beneath me should have been reading the cables.

I find it a dereliction of duty, a clear dereliction of duty. She wants to blame somebody else. It's absolutely her responsibility. Her failure to provide our ambassador and his mission with adequate security should preclude Hillary Clinton from ever holding high office again.

HANNITY: Joining me now to explain is the man himself, Kentucky Senator Rand Paul. Senator, a good friend of mine is the coach of the tennis team down at the Citadel was there and singing your praises about the speech, apparently very well received. Welcome back.

HANNITY: Explain in more detail. I tend to agree with you. I think the buck should stop with the people responsible. All the details we learned, they knew a lot more at the time. They purposely deceived us. It doesn't seem to have resonated with the American people to my satisfaction. What do you think?

PAUL: I think the one thing people want from a commander in chief is someone who will defend the country. If you are not going to send reinforcements, you're not going to provide adequate security for our troops or our ambassador, I think it really does preclude you from consideration. There is this bar you have to achieve. And if you want to be commander in chief for the country, you want to defend the largest, greatest, freest country in the world, you have to be willing to put and send reinforcements, to put security in place.

So I don't think there is an excuse. When you get to the 3 a.m. moment, when you have to make a decision, you want someone who would defend our soldiers. And I think the fact that she didn't and for six months leading up to this she didn't send adequate security. She turned it down, said she didn't have time to read the cables, I just think it's inexcusable. I don't think the American people will elect a commander in chief who failed to support the troops.

HANNITY: After the lie was exposed they kept regurgitating it anyway that this somehow was related to a YouTube video which, in fact, it was not. Let me let me ask you this, because you seem to be wading into these presidential waters a little by. I had a discussion about 2016 candidates and your name came up. And there was an impression among people that I was speaking with that you're an isolationist. And I said, no I don't think he is. I think maybe your dad could have, and I wouldn't even use that term against your dad, but you distinguish isolationism from having a smart Defense Department. What is the difference?

PAUL: Right. I think there are two extremes. I think we can be everywhere all the time around the world, or we can be nowhere. If you don't want to be anywhere, you're never going to help anybody, you're not going to defend the country overseas, that's isolationism. I'm not that. But I'm also not at the other extreme where I would say we have to be in every war. I think a lot of times, and in fact I think the constitutional process is we have to have a debate in our country. And I believe in the Reagan doctrine that says our vital interest has to be threatened, the public has to be behind it, and we have to fight for complete victory. We don't fight for a negotiated settlement like President Obama has been talking about. You fight for complete victory. And I think that's what Reagan stood for.

HANNITY: Did you read James Carville suggestion to President Obama that he may want to take a toke off the Toronto mayor's crack pipe, and followed up the next day by Bill Clinton's comments that the president ought to keep his pledge, if you like your plan you can keep it? Do you view that as political maneuver by the Clintons and their allies to pave the way for her running?

PAUL: Perhaps. A lot of people are running away from the president now. Many of the fellow Democrats in the Senate are running away. But you know the one thing that hasn't been published so far and publicized -- every Democrat in the Senate voted for this rule. The rule that allows cancellations came up for a review. We had a vote on this three months after ObamaCare. In the Senate we voted. Every Democrat, including the ones now complaining, voted to uphold the rule that allows your insurance to be canceled that causes you to lose your doctor. This was all voted for by every Democrat. So this is their baby. They're going to have trouble running from this.

HANNITY: You've got a little bit of a feud with the governor of New Jersey who just won reelection, Chris Christie. There seems to be among some, the desire for coronation and no need for even a primary. If I was in New Jersey I would have voted for Governor Christie. But as I look on the horizon and I look at the electoral map and I look at these red states and I look at his position, I don't think the economy is that great in New Jersey, number one. I think some of his appointments when they're vetted are going to be deemed very controversial. His position on immigration, gun rights, are going to come into play. Does he have a problem in your view of getting conservatives in more red states voting for him?

PAUL: I think the party is big enough to have moderates. We should have moderates in the party. But I would say is that there are many Republican governors who chose not to accept ObamaCare. Republican governors who's chose to accept ObamaCare and expand Medicaid, it's not really a conservative position. It's not really even close to the center of the Republican Party. It's more close to what the Democrat governors did. So accepting ObamaCare and expanding it and bringing it to the state, I don't think that is going to resonate in Republican primary. We're pretty conservative in the Republican primary. So we'll see. But is there a place for moderates? There is a place.

HANNITY: He did have plenty of time to meet with the president a couple times, and you extended the olive branch and said you'd love to meet with him, and he turned you down.

PAUL: We're still waiting to break bread or have a beer with him. We offered to bring him to Kentucky and we'll give him some Kentucky bourbon, but so far he's been too busy.

HANNITY: In the spirit of spreading the wealth, are you going to pay for it?

PAUL: Absolutely. We do believe in private charity.