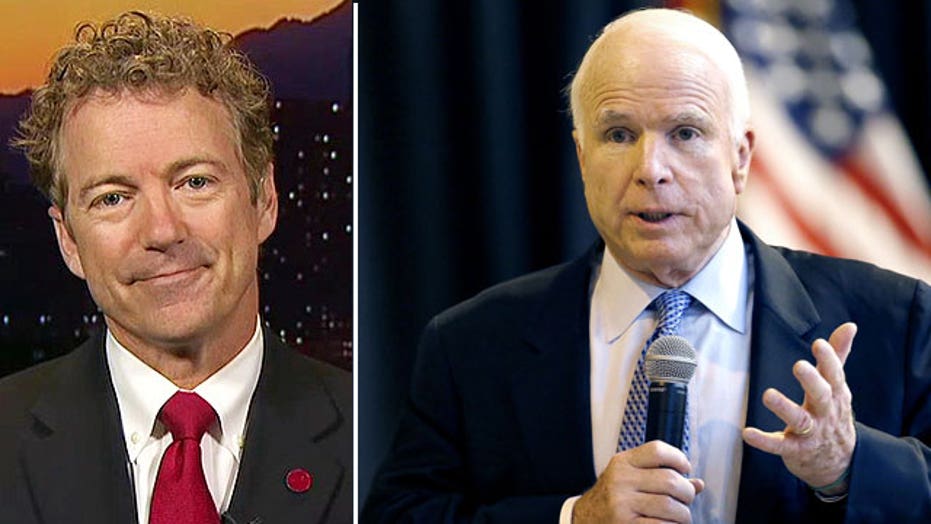 This is a rush transcript from "Hannity," May 8, 2015. This copy may not be in its final form and may be updated.

ERIC BOLLING, GUEST HOST: Welcome back to "Hannity." A federal court has ruled that the NSA's data collection program that gathers information from millions of Americans' phone records is, in fact, illegal. 2016 presidential candidate Rand Paul says this is a, quote, "monumental decision for all lovers of liberty." But not everyone agrees.

Senator John McCain had this to say earlier today. Watch.

SEN. JOHN MCCAIN, R-ARIZ.: Well, again, I think Senator Rand Paul is divorced from the reality of the nature and the magnitude of the adversary we face. It's called radical Islamic terrorists who want to kill Americans, and anybody who believes anything different is terribly naive.

BOLLING: Joining me now with reaction is 2016 Republican presidential candidate Kentucky Senator Rand Paul. Senator, you were one, if not the first, to call out the NSA, and I was one of the outspoken media figures agreeing with you. Boy, by the way, that wasn't very pleasant for me.

But in the end, you were right. The courts did say the NSA overstepped its legal authority. Yet John McCain still wants to take swipes at you. Why do you think that's the case?

SEN. RAND PAUL, R-KY., PRESIDENTIAL CANDIDATE: You know, I just don't think we ought to let fear allow us to forget how important the Bill of Rights are. You know, the right to a trial by jury is one of the things we're talking about. During World War II -- I guess John would remember those times. But back in World War II, we incarcerated thousands and thousands of Japanese-Americans without a trial.

That's the kind of stuff I'm trying to prevent. We've had this debate not only about NSA spying, but about indefinitely detaining American citizens. And I asked him point-blank, Senator McCain, would you send an American citizen to Guantanamo Bay without a trial? And he said, yes, if they're dangerous.

I think that shows a fundamental misunderstanding of our Constitution because John McCain doesn't get to decide if you're dangerous before you're sent to Guantanamo Bay. The American court system should. You should get a lawyer. You should get your day in court.

And it begs the question, are we going to let Senator McCain decide who's dangerous and he just ships them off for life, or are we going to go to a system, which is the Bill of Rights, where everybody gets their day in court? I'm happy to put my argument against his.

BOLLING: Yes, it just seemed an ad hominem attack, "divorced from" -- he's called you "divorced from reality" with what's going on with radical Islam. You want to refute that, rebut that?

PAUL: Well, the thing is, is I think we can stop radical Islam and use the Constitution at the same time. Think of the two Boston bombers, the young brothers that were the bombers in Boston. We already had some information about them. We weren't pursuing the information. And think about the person from Phoenix just recently -- that's where I am right now -- that traveled over to Texas to commit jihad. We knew about one of them, but we weren't following and pursuing the information.

I think we've made the haystack so big by searching every American's records that we're not spending enough time actually isolating in on the people who have shown some proclivity to attack us.

JEB BUSH, R-FLA., FMR. FLORIDA GOVERNOR: I would say the best part of the Obama administration would be his continuance of the protections of the homeland using, you know, the big meta-data programs, the NSA being enhanced, advancing this...

BOLLING: What would you like to say to Governor Bush now that the courts have deemed the program illegal?

PAUL: I think as he gets out around the country, he's going to discover that not many people agree with him. I think most Americans think that you shouldn't have your records collected. Now the second appeals court thinks the same thing, that really, your records should be collected consistent with the 4th Amendment. A judge should write a warrant. Your name should be on it. They should say what they want and they should have probable cause.

But I think people who think that we're going to indiscriminately gather up all the phone records, they're talking to the Americans I'm talking to because I'm going to have 1,200 kids today at Arizona State, and I'll bet you not one of them wants their phone records looked at by the government without a warrant.

BOLLING: No doubt. Senator, earlier in the show, we were talking to Pamela Geller, and we were talking about the free speech argument, you know, the whole situation with the cartoon contest that she -- she -- the event that she put together and the aftermath, the two jihadists that were killed.

Do you care to weigh in on how that was handled and the aftermath, the debate surrounding that?

PAUL: Well, the 1st Amendment is about difficult-to-accept speech.  It's not about, Hey, Eric Bolling, I love Eric Bolling. You're probably fine with that speech. But if I say something bad about Eric Bolling -- free speech is about criticism, dissent and saying things sometimes that are uncomfortable.

That being said, though, I think there's free speech and there's wise speech, and I wouldn't personally choose to be bashing someone's religion because I just don't think it's a good idea.

But I think that the Constitution protects even unacceptable speech, even speech that we all find not good for polity or good for comedy. But at the same time, the 1st Amendment allows for this, and that's what our country's about.

BOLLING: Senator, there was a report today that one of the top al Qaeda -- I believe in Yemen was killed, and one of his operatives killed, as well, via air strike, maybe even drone attack. Weigh in. A lot of people would say, How would Senator Rand Paul -- what would he react? How would he react to that?

PAUL: Well, a lot of people have misunderstood my policy on drones.  I'm not against the military weapon. I'm not against using them in a military or in a battlefield. I have been against using them on American citizens not in the battlefield and I made sure that the president finally admitted he wouldn't use them on domestic soil or here at home.

But it's really about due process. If you're fighting against America, you don't get any. If you're on a battlefield and you're shooting against American soldiers, a drone is fine. A drone is just another military weapon. But if you're an American that's vacationing in Europe or vacationing in the Middle East and you're not in the warzone, I think really if we think you're a traitor, we should accuse you of treason. You should be given a chance to come home. If you don't come home I think you could be tried in absentia for those who refuse to come home. But the thing is I'm not against the military weapon. I'm for preserving the Bill of Rights for American citizens who are not involved in combat.

BOLLING: I carry one of those in my pocket at all times. Senator, before we let you go, congratulations are in order. You opened a Silicon Valley office?

PAUL: Yes, we're in the process of that. And this is exciting for us. We're going to announce our chief technical officer. We have now an office in sort of mini Silicon Valley in Austin. We're opening a new one this weekend in San Francisco, we're going to be announcing our tech team.  And I think we'll give the Democrats a run for the money. We've looked at what President Obama did, how he is successful. We've tried to take some of those techniques, expand upon them, and we plan on being prepared to knock Hillary Clinton out of the ballpark and make sure that we don't get stuck with her as president.

BOLLING: All right, we're going to leave it right there. Senator, thank you very much for joining us on "Hannity" tonight.