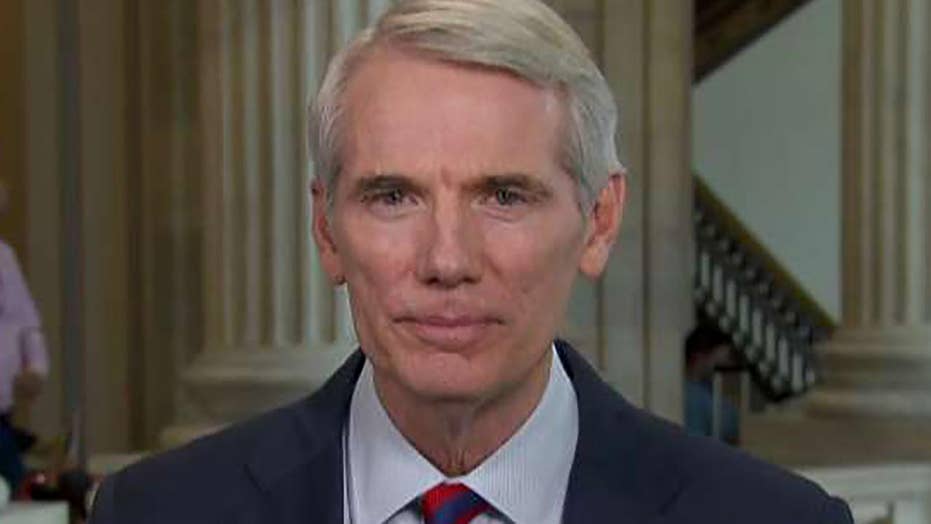 This is a rush transcript from "Your World," May 17, 2018. This copy may not be in its final form and may be updated.

NEIL CAVUTO, HOST: Well, he eventually won, as you know, and he's president.

And now and now he's talking trade with the Chinese. The president is to meet with the head of China's delegation in town. Ahead of that, he had a lot to say on it. Take a look.

DONALD TRUMP, PRESIDENT OF THE UNITED STATES: Have you ever even seen a negotiating in trade? Nobody has ever seen anybody from our country even negotiate on trade, trade with China and with other countries. I'm not just blaming China. China is the biggest. But trade has been a total one- way street.

Senator, always good to have you.

What do you make, sir, of these latest developments on the trade front, that, you know, there's some division within the White House, we're told, among going really, really tough, sort of the Navarro route, or mainstream globalist, the Steve Mnuchin route?

SEN. ROB PORTMAN, R-OHIO: Well, I think the president is right to focus on China. He's right to say that the imbalance between the U.S. and China has grown over time.

And, by the way, of the $500 billion trade deficit we have got, roughly $370 billion of it is with China. So, no question about that.

And one of the issues that he's focused with China, as you know, is intellectual property, the fact that they take our secrets and use them. And so it's real. And it's good that he is finally sort of standing up to it, not finally him, but finally an American administration is doing that.

But, Neil, you have to be careful how you do it.

CAVUTO: But in doing so -- but in doing so, Senator, as you know, he's willing to offer an olive branch to the Chinese on ZTE Corporation, which has been found to have been conducting espionage, stealing secrets, doing all the things you just mentioned in order to extract a trade deal.

It does seem weird, doesn't it?

PORTMAN: That does seem a little weird.

PORTMAN: Because ZTE is a company that makes phones. And even the FBI director, Wray, the new director, testified this week that he's concerned about countries that don't share our values having companies here in the telecommunications network.

So that is sort of inconsistent with what I think we're trying to do generally with China, which is to ensure that we do have reciprocity and a more level playing field, and specifically with regard to our intellectual property, which would include telecommunications and other sophisticated kinds of technology.

So -- but, look, I think that's appropriate. If you go too far, I think what some people in the White House were saying -- you mentioned Steve Mnuchin, the secretary of the Treasury -- is you will actually end up shooting yourself in the foot, if you really do in fact have the Chinese retaliating against our products, and yet we aren't getting satisfaction on more entry into their markets.

So, there's a way to do this. We have the bigger market. We have the trade deficit. In other words, there's only so much they can do to hurt our trade, because they're selling us a lot more than we're selling them.

And I do think it's appropriate.

CAVUTO: But what approaches are they taking, right?

I know the president right now is meeting with China's vice premier this hour.

CAVUTO: And one of the things that has come up is this, how far do we push the Chinese? Now, Peter Navarro of course is saying we push them a lot and we don't do anything with companies like ZTE.

Mnuchin, the treasury secretary, seems to be part of that more traditional approach, incrementally, we get concessions from them. And even if it means making a deal on ZTE, the end will justify the means.

Where are you on this?

PORTMAN: Yes, well, first of all, ZTE is a separate issue, Neil, because it's a national security issue. And that's why there is a sanction.

CAVUTO: I know that, but the president has linked it.

PORTMAN: I know. And that's why, as you said -- you used the word weird.

PORTMAN: And I suppose that is a good way to put it, because it doesn't really connect with the trade issue.

But let's assume that, on ZTE, it's handled on its merits, meaning that the sanctions remain if there is a national security concern, which I believe, from what we know and what, again, Director Wray said this week, is probably true.

We're just saying, you're a big, mature trading partner now. You're part of the WTO, World Trade Organization. You have to live by their rules.

And one of the issues on U.S. investment over there has always been that, in many industries, the Chinese require that there be Chinese ownership. And that's one thing the president has focused on appropriately.

One of the issues there is those Chinese owners, 51 percent owners, take the intellectual property and sometimes use it for another Chinese company or otherwise have it be used on the Chinese side.

We will see how it goes. Senator...

PORTMAN: But there's a big middle ground here where we can make progress.

CAVUTO: All right, we shall see.

Sir, always a pleasure. Thank you very, very much.

PORTMAN: Thanks, Neil. Good to be on you.