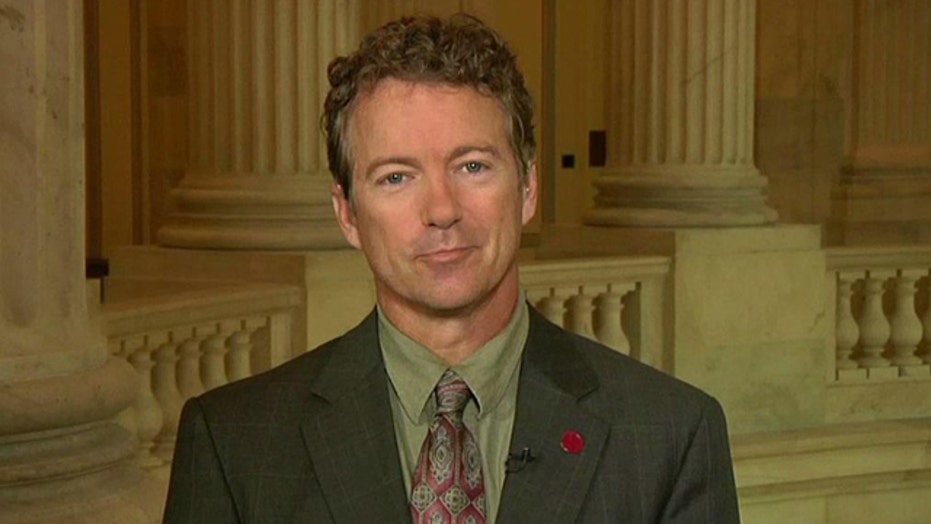 Congressman says 'neither party wins' in the stalemate

This is a rush transcript from "Hannity," October 7, 2013. This copy may not be in its final form and may be updated.

SEAN HANNITY, HOST: The administration, they've mastered the art of making it hurt. And to remind our viewers, at the bottom of your screen, you can see the list of services the White House has cherry-picked to close and defund during the Obama/Reid shutdown.

And joining me now with reaction to the Democrats', well, stubborn behavior, is Kentucky Senator Rand Paul. Senator, how are you?

HANNITY: You know, I find this pretty interesting -- the president's golf course is open, no football, no baseball, satellite up-link for our troops, the World War II memorial, Vietnam memorial -- those aren't open. Makes one wonder. What is your thought about how they've prioritized this?

PAUL: Well, you've got to wonder. Apparently, the Amber Alert, you know, searching for a kidnapped child, has been closed down. But Let's Move weight loss program for the first lady is open today, so I guess they do have priorities.

HANNITY: Well, apparently, they are, and they're doing it in record numbers.

House Republicans have announced an investigation into shutdown abuses. Can you do anything similar in the Senate?

PAUL: Well, in the Senate, the Democrats control all the committees, so we can't do anything over here. But I think they do deserve some ridicule for what they're doing. I mean, the whole World War II monument idea.

But then there are some more serious -- you know, they're playing games with the shutdown of government. But what's more serious than that is they're also playing games with defaulting. And that does scare the markets, and I think it's irresponsible of the president or Jack Lew or any of his men or women to go out on TV and say, "Oh, the U.S. might default." That's simply scaring the marketplace. We have never defaulted. We will never default. And there's not even a reason to default because we have plenty of revenue that comes every month to pay our interest payment.

HANNITY: Well, I think this is a really important point, because I think they are trying to scare people and they're trying to maximize the pain they can inflict on people. I think where the Democrats are miscalculating here is this whole idea -- We're not going to negotiate. And I think we're seeing this now show up in the polls.

How long do you think it will be before Obama and Reid have to sit down like adults and put their toys aside and start talking like regular people?

PAUL: You know, I've always said a shutdown was a bad idea. I didn't want to be where we are now. But now that we are here, neither party wins. And if they really can fool themselves and think, "Oh, we're winning, the longer we do this, Republicans are getting beat up" -- eventually, both parties will be beat up. Everybody's going to be frustrated. And eventually, they're going to look for us to begin having a negotiations and a compromise.

I think a compromise exists, but the president's going to have to give in a little bit and say, "The country's going bankrupt and I will restrain some spending," because that's all we're asking. We're worried about bankruptcy of the country. We're asking that some kind of restraint on spending happening (ph).

HANNITY: All right, let's talk about the House has sent over a number of bills to your chamber, and they want to fund the NIH and the V.A. and the national parks and FEMA and WIC and the National Guard and give back pay to those people that are innocent victims in all this.

Is there any chance any Democrats are coming to you privately and saying, "Senator Rand Paul, I'll be glad to help you"?

But what I would tell you, when you look at this and you look at what's happening with these things, they've been saying they want a clean CR, which is a spending bill without riders. All of the things that we're passing in the House that you just mentioned -- Veterans Affairs, NIH -- those are clean CRs. They're just small spending bills.

And that's really the way it was intended to happen. Historically, around here, we would pass 12 spending bills a year. And you couldn't shut down government if we were doing our job properly. If Harry Reid had brought forth appropriation bills, there would be no spending to hold as leverage or there would be no shutdown. But he hasn't brought up any of the appropriations bills.

HANNITY: All right, Senator. My advice and admonition is Republicans can't give in to this bullying, that the president -- they are constitutional limits that he has. And the House has constitutional authority as well. So hold the line. And I hope, in fact, they'll do that. Thanks for being with us.