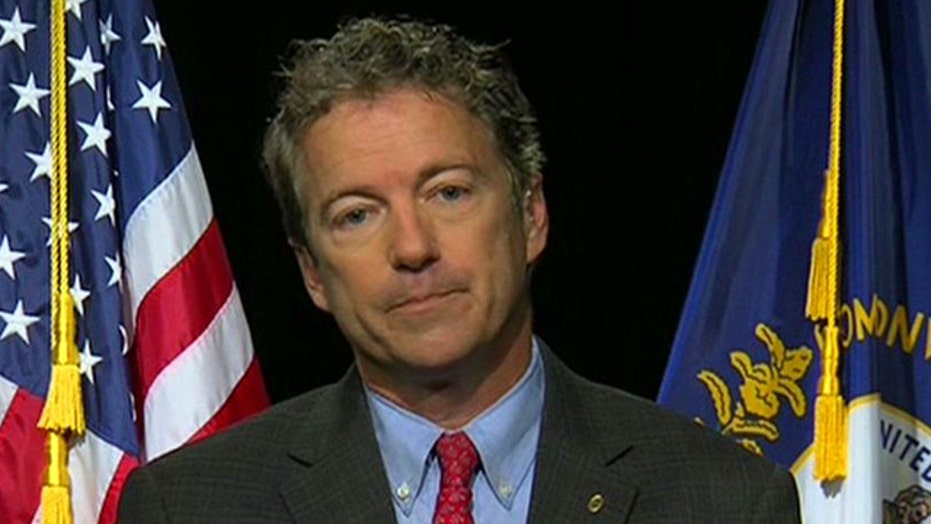 This is a rush transcript from "Hannity," October 22, 2013. This copy may not be in its final form and may be updated.

No, really, I mean, the woman was very nice, by the way. She was being very honest. And nobody likes it, and all they're doing in the calls is sending you back to the website that's not working! You can't make this up, Senator!

SEN. RAND PAUL, R-KY.: You know, it doesn't surprise me. I've dealt with government for over 20 years in the practice of medicine. And if we have a question we want to ask Medicare, it can sometimes take an hour. The people in my office would get on speed dial and just keep dialing over and over, and then they'll only answer two questions.

So the government's just not very efficient at handling this. And that's why it's a big danger turning a sixth of your economy -- our health care is a sixth of our economy -- turning all that over to government in one fell swoop. I really think the glitches are going to last quite a while.

HANNITY: Well, the other thing is, I actually had -- I was on the air today. We made another call-in. First we got hung up on. Then I made another call. Then I was put on hold, and they played nice government music for me. And the finally, she said, No, I got to recommend you to a supervisor. The supervisor's telling this poor girl what to tell me and eventually said, "Shut him down, shut him down!" That's what the phone line did today!

PAUL: Oh! Yes. Yes, I don't anticipate that this is going to resolve itself soon. And the big thing that I think people are going to discover about this is that if you mandate what is included in your insurance policy, if you say it has to cover all kinds of new things that haven't been covered, it has to be more expensive. There's no way it can be cheaper. It has to be more expensive if you mandate what it includes.

HANNITY: All right, we've been putting up -- and we're going to continue to do so again tonight just for the benefit of our audience, the Heritage Foundation study. And they went state by state, what the premiums are going to increase. Forbes magazine says 99 percent for men premium increase, 62 percent for women. Forty-five states altogether are going to have higher premiums.

My question, Senator, is, if that's the case, why did we do this when the president said that would not be the case?

PAUL: Well, see, I think you've always had two competing problems in health care. One is access -- people who didn't have insurance -- and the other is cost. I think they are really going after the access. They're trying to give everybody insurance, but they ignored the cost of the insurance.

HANNITY: Yes. One of the worst things -- now the government -- I'm going to play -- they put together these propaganda ads. In spite of all the difficulties they've had, they can't just be honest about it, so they get young people -- "This is the greatest thing ever!"Here's -- we'll run them during the show tonight. Here's one of them.

UNIDENTIFIED FEMALE: I couldn't wait for the health insurance marketplace to open. I knew my husband and I were going to save money. We've been spending a fortune on health insurance each month.

The site was very easy to use, and the customer service representatives were patient and helpful. The plan I picked will save us hundreds of dollars each month. It has better coverage, lower deductibles and lower co-pays. I couldn't be happier that my family and I are covered.

UNIDENTIFIED FEMALE: You can be covered, too. Go to the health insurance marketplace at Healthcare.gov.

HANNITY: They're telling us something that is -- that to me is like old former Soviet Union propaganda! Doesn't it sound like it to you?

PAUL: Well, the thing about it is, if it's so good and it's free and it's going to be so easy to get on the Web site, why do they have to advertise to get you to do it? Why are they going door to door trying to convince people that ObamaCare is so great? I mean, if it's supposedly free and cheaper and it's going to be the best thing since sliced bread, why do we have to convince people to go buy it?

I think they're deathly afraid that young and healthy people are going to look at this and say, "This isn't better than what I've got currently, and it may be more expensive than what I have currently."

HANNITY: All right, I love what you're pushing here. And this is a constitutional amendment for Congress, and that is that the laws and burdens they place on we the people, that they must apply to them, as well. What a great idea.

PAUL: Well, Martin Luther King wrote in the letter from a Birmingham jail -- he said that a just law is a law that applies to everyone, has to be binding on everyone, and that if you exclude certain special interests groups from a law, that's the exact definition of an unjust law.

So I think this is an amendment that really everybody ought to be able to agree to. There have been a lot of times in our history -- originally, congressional members were exempt from Social Security. That's not true now because people got mad about it. But really, the law should be applied equally to everyone. I think that's a basic precept of the law.

HANNITY: All right, let me play one other cut for you. And this is the president, Jay Carney, Kathleen Sebelius, who I think should be fired. But anyway, this is them in denial about how bad this thing is. Listen to them. And I want to you respond to them.

JAY CARNEY, WHITE HOUSE PRESS SECRETARY: The system -- it's not failing. Hundreds of thousands of Americans are submitting their applications successfully to get into the system and enroll in ObamaCare.

JON STEWART, "THE DAILY SHOW," OCT. 7: All this person has to do is fill in their name, and the computer's, like, "What are you doing to me," you know? Why is it so hard?

KATHLEEN SEBELIUS, HHS SECRETARY: It's better today than it was yesterday, and it will keep getting better.

PRESIDENT BARACK OBAMA, OCT. 21: And all told, more than half a million consumers across the country have successfully submitted applications through federal and state marketplaces.

While the website will ultimately be the easiest way to buy insurance through the marketplace, it isn't the only way. And I want to emphasize this. Even as we redouble our efforts to get the site working as well as it's supposed to, we're also redoubling our efforts to make sure you can still buy the same quality, affordable insurance plans available on the marketplace the old-fashioned way, off line.

HANNITY: Now, before you answer, here's the president saying , oh, it's as easy as buying a TV on Amazon. Listen to this.

OBAMA: Just visit Healthcare.gov, and there you can compare insurance plans side by side, the same way you'd shop for a plane ticket on Kayak or a TV on Amazon. You enter some basic information, you'll be presented with a list of quality, affordable plans that are available in your area, with clear descriptions of what each plan covers and what it will cost.

You'll find more choices, more competition, and in many cases, lower prices. Most uninsured Americans will find that they can get covered for $100 or less.

HANNITY: It's all not true! What's your reaction to what they say versus what the reality is?

PAUL: Well, the thing is about this, Sean, is this is a fundamental misunderstanding. Liberals have no idea of how capitalism works. They have no idea why when you go to Walmart, products are cheap, how they get from one point to the other and how they're distributed in such a cheap fashion.

Imagine this. Imagine if we took ObamaCare and put it in Walmart, and you had a $10 co-pay and then you could fill you cart up with whatever you wanted. That's what would happen -- I mean, it's a disaster. But they don't understand the intricacies of how the profit motive and how you -- the efficiencies that go into distribution and trade and how you can get something, you know, a T-shirt now for $9 because of global trade, efficiencies in the marketplace.

HANNITY: Well said. Senator, good to see you. Thank you.