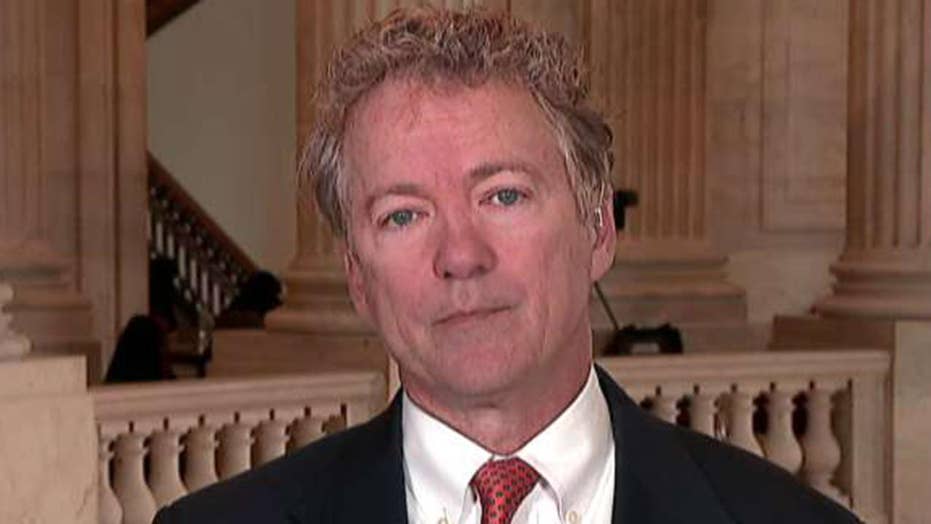 Senator Rand Paul joins 'Your World' to weigh in on the Mueller probe, the firing of Andrew McCabe and President Trump's call for phase two of his tax reform plan.

This is a rush transcript from "Your World," March 20, 2018. This copy may not be in its final form and may be updated.

NEIL CAVUTO, HOST: All right, amid calls for some Republican leaders now saying a second special counsel would be in order to investigate possible abuse and bias at the FBI and Speaker Paul Ryan earlier today indicating that he does not see any sign that the president is about to or even looking at the possibility of firing Bob Mueller, enter Kentucky Senator Rand Paul, who joins us on all of these fast-moving developments.

SEN. RAND PAUL, R—KENTUCKY: Thanks, Neil. Thanks for having me.

CAVUTO: First of all, to Speaker Ryan in saying that he sees no indications out of the White House that Mueller is going anywhere, do you agree with that?

And I think getting a new special counsel probably isn't the way to go. I have actually been pretty pleased with the way the Inspector General Office has worked. They found all these text messages between Peter Strzok and Lisa Page. They found the problem with Andy McCabe illegally leaking classified information.

So, so far, I think the process is actually working pretty well.

CAVUTO: This process, though, the more it goes on and the back and forth, by the president mentioning Mueller`s name, do you think that was a mistake?

How they could keep Peter Strzok on in the FBI, when he was the one questioning Hillary Clinton, and it turns out that he`s this huge partisan and hater of President Trump? I don`t know how they could do that with a straight face.

Finally, Mueller gets rid of Peter Strzok on the commission, but at the same time, there are rumors that Mueller`s team is full of partisan Democrats.

CAVUTO: What do you think would happen if the president did fire Mueller or through his surrogates did?

But I do think that the real problem here is that the whole investigation has gone far afield from having anything to do with Russia. I mean, they're getting Paul Manafort on some tax charges. They have gone after General Flynn not for doing anything wrong, but for not being accurate in representing a private phone call.

And the interesting thing is this. If Flynn is going to jail, shouldn't Andy McCabe go to jail? I mean, Andy McCabe lied about doing something illegal. Supposedly, General Flynn didn`t tell the truth about something that was actually not illegal.

So, I think there's a lot going on here. But I`m very concerned about how the intelligence agencies that have so much power, the power to look at and listen to all of your phone calls, and they have the power to actually remotely assassinate people, people running these organizations should not be partisans.

They should not be people who are so biased against the president that they were using the power of their office to go after President Trump.

CAVUTO: Do you think the firing of McCabe was justified?

If he leaked classified information and then lied about it, absolutely. That's what we`re being told happened.

PAUL: Well, I think it`s murky as to what actually happens with his pension.

I think right now his early pension is being delayed. But I think, so far, from what I understand, that even if he is all run out on a rail for lying, that he will probably still get his pension. That`s another debate to have at another time.

But I think that it is important that people can gain some confidence back in the FBI that it's not just a bunch of people running around all day plotting to try to bring down a sitting president.

CAVUTO: What do you make of investigations like this one, much like the Ken Starr one, that veer from their original purpose? You touched on it, Senator, but invariably that`s what happens in one such investigation after another.

CAVUTO: Is the process itself flawed or what?

PAUL: Yes, prosecutors have a great deal of power.

And you know the old saying even a grand jury could indict a ham sandwich.
I think that there is a troubling nature that we almost look like a banana republic, in that whoever wins the office then goes after the people who used to be in the office.

In Guatemala, the previous president is in jail. And now they have accused the current president of malfeasance, which I don`t think there`s evidence of. But it`s like one party accuses the other party of malfeasance, and then we have all this criminality attached to politics.

And maybe politics should be in a different realm from criminality.

CAVUTO: Let me ask you a little bit about the firing of Rex Tillerson as secretary of state.

You were not keen, still not keen, I assume, on Mike Pompeo coming in, the CIA director, into that job, or his number two, Gina Haspel, taking over that job.

PAUL: Well, the one thing I have really liked about President Trump is his out outspoken opposition to the Iraq War.

And being against the Iraq War means that you learn the lesson of what was wrong with Iraq War. And that was that regime change in the Middle East sometimes leads to unintended consequences.

I`m disappointed that he is now selecting people who actually love the Iraq War so much that they want a war with Iran next. And so I think it is a real problem.

I mean, right now, Iran is stronger because the Iraq War. And all the proponents of the Iraq War did not think that through. And if they didn't learn the lesson of the Iraq War, they don't need to be in charge of advocating for a new war with Iran.

CAVUTO: When Wyoming Congresswoman Liz Cheney heard about your opposition to these two folks, she said that you are defending and sympathizing with terrorists.

PAUL: I think when people are so juvenile and so simplistic, it gives sort of credence to the thought that the neocons are naive people.

But until they apologize for all of their mistaken notions, I certainly am not listening to them.

CAVUTO: I might be mistaken in what was behind the president naming Pompeo to take over the State position, that he does want a more muscular foreign policy and maybe is looking to have a more in-your-face view that this country should have in that region.

PAUL: Perhaps, but I think that's inconsistent with his advocacy and his condemnation of the Iraq War.

CAVUTO: If you don't mind my ping-ponging around here, Senator, Eric Holder, the former attorney general, has said of Jeff Sessions he needs to have the guts to stand up to President Trump.

I think he was referring to the Andrew McCabe firing, and that he was doing essentially -- I`m paraphrasing -- the president`s bidding.

What did you make of that?

PAUL: I think actually Attorney General Sessions did stand up in a way. He stood up and said that the process should work through the Inspector General's Office and that we're not going to summarily fire Andy McCabe.

So he did let the process work. And the nonpartisan Inspector General Office went through and discovered not only these text messages between Peter Strzok and Lisa Page, but they actually looked in a very systematic way as to whether Andy McCabe leaked classified material, and then whether or not he was dishonest about leaking that material.

And I think that that is a process that has actually worked out very well, but actually worked with Attorney General Sessions sort of resisting some advice he was getting from the president at the same time, but I think in the end worked to find justice.

CAVUTO: Are you surprised that Jeff Sessions hasn`t resigned?

CAVUTO: But are you surprised that he stays on even when the president has tweeted and said some pretty nasty stuff about him?

I think that every individual reacts in a different way.

CAVUTO: But what would you do, Senator? If you were the attorney general of the United States and the president was saying that about you, would you quit?

PAUL: Well, my nature is to push back. I`m not inclined to be pushed around.

And I think maybe that's what Sessions' nature is, is that he wants to do his job. The attorney general is probably one of the few positions there that is seen as a position that is supposed to be somewhat independent of the president`s control.

He can be fired at any time by the president. But at the same time, there's a whole body of history to the position that leads us to think it shouldn't be summarily fired.

PAUL: And so I think it's the one position where you can actually resist the president`s will to a certain degree.

Almost every other position in the Cabinet, I think you serve at the president's pleasure. The attorney general also does, but I think has a little bit of the power of that position and the history that position to be able to push back some.

CAVUTO: Do you think there has to be legislation out there to protect Bob Mueller from being fired? Some of your colleagues think there should be

PAUL: I would rather see legislation that we don`t do any more special prosecutors, much less keep them on forever.

My fear is that the Mueller investigation will get so far afield, that they will be looking at Trump's tax returns from 20 years ago, and try to do something on a tax charge, which I think, if you look at anybody's tax returns for 20 years, there could be a problem.