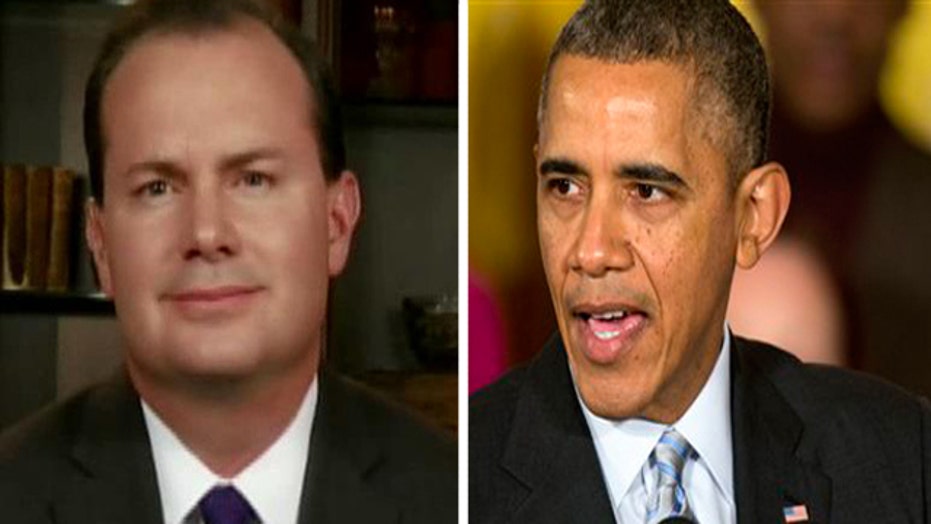 Sen. Mike Lee: What gives the president this authority?

This is a rush transcript from "The Kelly File," February 17, 2014. This copy may not be in its final form and may be updated.

MEGYN KELLY, HOST: And developing right now on "The Kelly File," a top Senate Republican says the Justice Department has just missed a deadline to explain President Obama's recent run of executive actions. This just weeks after Senator Mike Lee grilled the attorney general over whether this behavior is even legal.

Joining me now, Utah Republican Senator Mike Lee, who is a member of the Senate Judiciary Committee. Good to see you, sir. So Eric Holder has received that request and said, I don't think so. And so what is your next move?

SEN. MIKE LEE, R-UTAH: Well, our next move is to continue to question him. I questioned him in the Judiciary Committee a few weeks ago and still have yet to receive any satisfactory response to my question about what gives this president the authority. The attorney general, to my great surprise and dismay really didn't have anything. All he said was, "I'm sure there is authority in there somewhere, I don't know where it came from, I'm not sure who reviewed it. " I reminded him that he is the attorney general of the United States and all he could come up with, was "I'm sure we have something that covers it."

But this is a problem, Megyn, because we do have a Constitution. The purpose of the Constitution is to prevent any one person from getting too much power, especially our chief executive. And that is not being followed. The Constitution is being openly flouted and that's hurting the American people.

KELLY: But we've talked about this -- we have been talking about this for weeks now, and we did a whole special on this on Friday night about what the president has done. We had law professors from both sides of the aisle who had questions about the president's behavior. The question is, what is going to be done about it? Because you know, you can write your letters to Eric Holder saying, tell us the justifications and I know a lawsuit does, you know, pending in, you know, what is actually going to be done?

LEE: OK, so let's take for example the president's executive order suspending the employer mandate, which by the way overlooks the individual mandate. It forces hard-working Americans, you know, the poor and middle class to comply with their mandate but tells big businesses that they're off the hook. That decision is very difficult to challenge in court. It is very difficult to find someone with article three standing to challenge that in federal court.

LEE: The best thing that we can do in Congress is to withhold funds, for Congress to exercise its power of the purse. James Madison talked about this in Federalist 57, and he said that, you know, when the President abuses his power, the best thing Congress can do is withhold funding for the president, so that the president can't continue to hurt the American people.

KELLY: I know you would like to, but you know, what are the odds?

LEE: Well, OK, so the odds for that happening, Megyn, go up every single time the American people see that the poor and middle class in this country are being hurt by this president. Arrogating power to himself that does not belong to him. It belongs to the people. And doing it in a way that hurts hard-working Americans, especially the poor and the middle class. The more that that happens, the more the American people see this.

LEE: The more pressure that people in the House and Senate will feel to finally start changing the way we spend money in Washington.

LEE: To finally start refusing to simply funded the president in this excessive executive overreach.