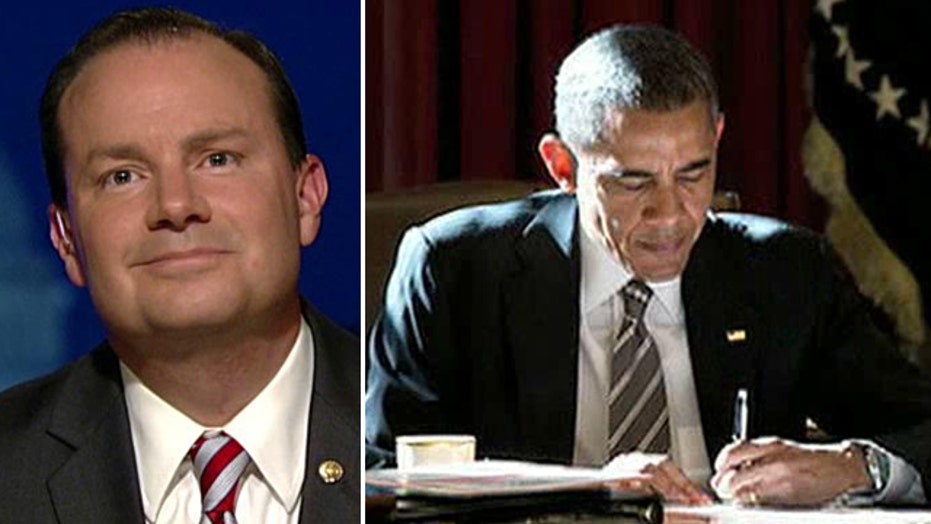 Sen. Mike Lee: 'Ours is not a government of one'

This is a rush transcript from "The Kelly File," June 26, 2014. This copy may not be in its final form and may be updated.

MEGYN KELLY, HOST: Developing tonight, new fallout after the Supreme Court rules that the President went seriously too far with his pen and his phone. Welcome to "The Kelly File," everyone. I'm Megyn Kelly. The Supremes very clear in their decision today. Not one dissenting voice, not even the justices who owe their high court seat to the presidents. The 13th time they have ruled against this administration unanimously. Today all of the nine justices agree that President Obama went too far when he made three recess appointments to the National Labor Relations Board back in 2012 when he could not get some controversial candidates on the board. Actually, he didn't even offer them a chance at confirmation. He just assumed they weren't going to get it and he decided to go around Congress by declaring that the Senate was not in session, even though they were and that he had the power to bypass Senate approval. It was exactly this kind of action that then candidate Barack Obama frequently complained about when he was running for president back in 2008.

KELLY: Well, you didn't, say the Supreme Court justices. Senator Mike Lee who was in those Supreme Courts hearings today joins us now.

Senator, he just didn't. And at the time the White House was pressed on how he could possibly be arguing that a recess appointment made while the Senate was not in recess could be constitutional and we had the likes of Jay Carney telling us, well it just was.

SEN. MIKE LEE, R-UTAH: That's right. And you have the president of the United States in one segment telling us that he's going to follow the Constitution. And now you've had 13 consecutive instances in which the Supreme Court has concluded unanimously, nine-to-zero, that the president was wrong. Today, they really lowered the boom, and they concluded once and for all, that ours is not a government of one. The president tried to make it then the Supreme Court smacked him down yet again. It's good day for America but it's sad that it had to get to this point, Megyn.

KELLY: You know, Harry Reid is not dissuaded. He came out with this statement today and said as follows: "President Obama did the right thing when he made these appointments on behalf of the American people." He says, "The NLRB had ceased to function due to Senate Republican obstruction of these three qualified nominees." And he goes on to talk about how the NLRB, you know, was really suffering and they needed, you know, people on there to resolve these labor disputes, that go up there between big labor and corporations. He neglects to point out, however, Senator, that the Republicans had tried to fill those very seats and who was it again who refused to give those candidates votes to get them on the NLRB?

KELLY: But now he's so shocked about what's happening.

KELLY: They need those nominees.

LEE: Yes. He said they needed them. And yet the president didn't even bother to give us a chance to process these nominations first. And it's quite ironic moreover, Megyn, that Harry Reid is talking about how this was a tragic day in American history. The Supreme Court actually enforced the Constitution and Harry Reid is talking about how it was so necessary for him to invoke the nuclear option. Really what he did was to break the Senate rules in order to change the Senate rules.

KELLY: Just tell the viewer what you're talking about for the ones who don't know.

LEE: OK. So, what Harry Reid did when he invoke the nuclear option back in November was that he broke the Senate rules that require a 67-vote super majority in order to change the Senate rules, Senate rules requiring 60 votes to get to what we call cloture on the presidential nominee.

KELLY: My bad for asking a lawyer and U.S. senator to try to explain something so complex in a quick 30 seconds. Basically he's talking about the fact that he changed the rules to make it easier for the Democrats to get judicial nominees through. Now, however, here's my question to you. Will this dissuade President Obama do you think from the pen and the phone on a go forward basis? Thirteen unanimous Supreme Court smack downs.

LEE: I certainly hope that it will. But so far every indication is that this president is going to continue openly flouting the Constitution. But I think we can change that. I think we can change this November when the American people show up in really strong overwhelming numbers in House and Senate elections across the country, and they vote to elect Republicans. I think the president at that point might get the message. I think at that point, at a minimum, we can see that the president will have his power stripped or at least significantly pushed back by a strong Republican majority in both houses.

LEE: Good to see you.